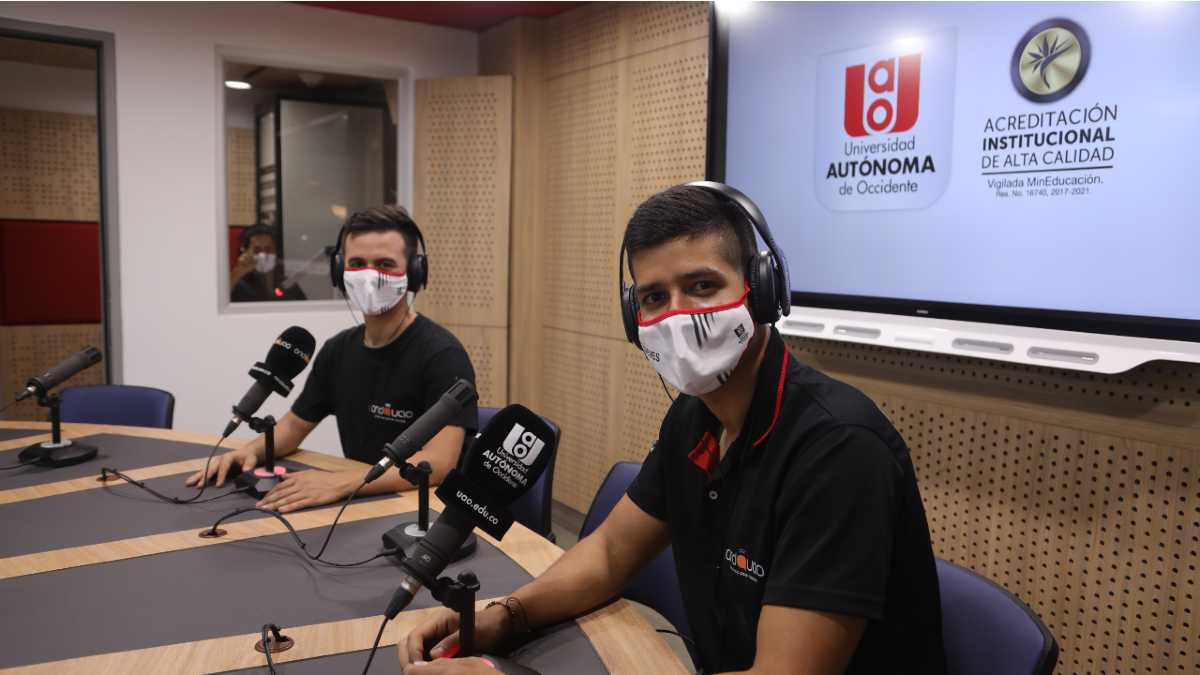 The Autonomous University of the West installed an IP radio studio, 100% digital, where audio monitors with Dante connection were implemented to optimize audio resources.

The Faculties of Communication and Social Sciences and Humanities and Arts of the Autonomous University of the West of Cali, UAO, launched a project in which they had been working for a couple of years, a digital audio laboratory (audio / lab), and the modernization of the virtual station ondaUAO.co.

Juan Pablo León, Technical – Commercial Representative of Aspa Andina in Colombia, told TVyVideo+Radio that the project consisted of a booth / laboratory for academic training, which has all the technological resources, of the highest level, involved in a radio and video production with 100% automated / remoteable operational viability in case it is required.

"Clearly, due to the dynamic characteristics demanded by live radio, manual operation is still a basis of its production, but what was sought in the project is to carry out an implementation that would allow technological resources that facilitate the training / learning work of students, with "the same" professional equipment that they will find in the real labor market when they finish their studies at the University, "- Highlighted.

Audio and video implemented
In audio, a digital console of the German firm DHD was implemented, particularly with the 52-SX model, with a control surface of 16 Fader and installation of audio interfaces (Inputs / Outputs) duly distributed in the space assigned for the studio (Control / Locutorio) taking advantage of its modular architecture.

The DHD console is responsible for mixing each of the audio sources of the studio, in the different audio formats of the peripherals there connected and fully scalable at the time it is required; microphone, analog line, AES/EBU, SPDIF, USB and even has connectivity through AoIP through the Dante protocol.

Additionally, for future projections of implementation of digitized studios also with DHD, the console has a proprietary protocol (APC Audio) that will allow the implementation of a digital audio network in real time to share up to 48 bidirectional channels between each of the studios simply through the interconnection of these with a Cat5e/Cat6 network cable.

On the subject of video, a French solution called Multicam Systems was implemented, based on a development of Artificial Intelligence that allows to give a process of dynamism to the production of video, 100% automatic, depending on the detection of voice level in each microphone, through a development between Multicam and DHD that allows through a communication via Ethernet to know the status and threshold (parameterizable) with which we want to perform the detection of level in each peripheral to be configured.

The system, in addition to this communication with the DHD digital console, consists of 5 PTZ cameras, manageable through a configurable Joystick, or through the Multicam user interface through a 21" touch screen, which also acts as a "Switcher" when you want to interrupt the automatic operation, choosing the camera or video source that you want to put on the air, since there are 4 additional video sources through SDI / HDMI signals, reaching up to 9 professional HD video inputs used in the project.

Juan Pablo León stressed that the University currently has a virtual station, which will be linked to the project supplied, called Audiolab, but with the resources implemented there they could move their live broadcast at the time it is required. "On the previous space, it had a similar purpose, much more limited, and not very clear. With this implementation, this space is potentiated for much more advanced academic training processes, as well as live radio and video production processes, as required, taking advantage of the streaming broadcast platforms that the University has contracted with CG Producciones and Enetrés Media Solutions.

Training professionals
Luis Fernando Ronderos Nieto, from the Audiovisual Media Production Center of the Autonomous University of the West, commented that "the University envisioned this project from a couple of years ago, and at the TecnoTelevisión&Radio fair in 2018, Aspa Andina was contacted for the development of this project."

Being a University, the main purpose of this facility lies in the training of professionals, who as future graduates can be trained with professional equipment that will be found in the real labor market.

"DHD is a growing benchmark nationwide. We have clients such as Blu Radio, RTVC – Sistema de Medios Públicos, RCN Radio, Caracol Radio, among many others, as have other recognized Universities such as the University of La Sabana, the Javeriana University of Bogotá, the Santo Tomás University (Bogotá and Tunja Headquarters), Universidad del Valle or the Technological University of Pereira, among others. Precisely this facility allows students to be trained with the equipment they will find as graduates in the real labor market in the media, "said the representative of Aspa Andina.

One of the challenges that this facility had for the UAO was that it began in April 2020, which coincided with the isolation decreed by the government in Colombia as a measure to face the pandemic generated by Covid19. To meet the stipulated deadlines, they had to rely on local installers in Cali.

"We had a huge challenge in the implementation that we managed to solve thanks to an excellent work team, a meticulous coordination and logically thanks to the communications tools offered today. As we could not travel to the city of Cali, but still had to comply with the work schedule agreed with the University since before the pandemic, we have the local installers in Cali, in permanent coordination with our technical department in Bogotá and Madrid, Spain. This is how we managed to carry out this imposing project," said Juan Pablo León.

No thoughts on “Audio and video for university radio”