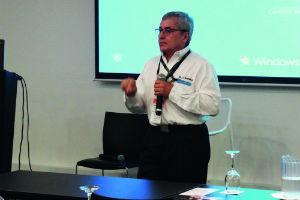 The lack of knowledge of the correct functioning of the equipment in the stations is generating deficiencies in the signal that reaches the listeners of the radio. The key is training.

For those who have a somewhat pessimistic view about the future of radio with the influence of the internet, FM has only a few years left in existence. But there are those who consider that this is not the case and that there are many opportunities that you have if you know how to take advantage of it.

That is the case of engineer Rubén Navarro, vice president of the company Elettronika, who has more than 20 years of experience in the development of projects for radio and television in Latin America and the United States. He shared with TVyVideo+Radio some of his insights on the state of the industry in the region and how it can be improved.

He commented that "FM radio is going to become a revolutionary element. Many people do not see it that way and the vast majority of engineers still see FM as a repowered AM radio, because FM media owners are the former owners of AM media and when they come from the AM culture they consider that life will always be the same. That is why we need to repower and launch the FM radio network to what is the twenty-first century, because our radio networks, speaking specifically of the Colombian case, continue to live in the nineteenth century."

The problem is not one of silver. He acknowledged that in many media the technology is not denied, the resource is available but the problem is that it is not given the proper use. There are cases in which they buy a device of 12 thousand dollars and joins as one of 300 dollars and everything is due to technical ignorance. Rubén Navarro participated as a speaker at TecnoTelevisión&Radio 2015 and recalled an anecdote that he had specifically with one of the conference attendees on this subject:

"At the conference I gave someone who told me I had just bought an $11,900 stereo generator audio processor that comes with a 250-page manual. He read it, he didn't understand it and he told me that's why he was going to have to leave the team as it came and put it on the air. This is practically a setback, because in many cases when the device is not well configured, it generates distortion of what is heard on the air and that is attributed either to the new equipment or to the transmitter, not to the ignorance that there is in the management of the equipment. "

The dog that barks the most
The Vice President of Elettronika stressed that the main problems of Latin American FM radio are a common point among all: MP3, high distortion, overmodulation and lack of adjustment in the transmitters. "It's not a matter of buying the latest technology, it's a matter of knowing how to use it, it's a matter of technical knowledge. The engineers are probably well prepared, but someone told me, and I hope to see it, that it is not the engineer who makes the decision, but the production manager or the owner of the medium. And when you have the trained person isolated to put out fires, it's not going to allow you to move forward either."

These technical problems due to lack of sufficient knowledge about the equipment have generated a concept that describes its result: "The dog that barks the loudest". This means that many seek to sound louder by increasing power to the transmitters and what they achieve is to distort what people hear. The problem is that when the stations are equalized, some raise the power more looking to bark louder, generating greater chaos.

"Cities like Bogotá can easily be managed with low power, which would result in lower energy consumption, better quality coverage with fewer bounce points and interference. But we are doing the opposite. Instead of going to the RF optimization point that was assigned to us, we are going to try to saturate and destroy the spectrum to be more powerful, because there is a belief that whoever is heard louder has more power, but that is not true, the one who hears louder has more distortion. " he said.

Role of manufacturers
"There is no point in selling products if people do not know how to use them. It's not the brand, it's the technical knowledge that makes the difference." This is a reflection that Rubén Navarro makes about the role of sellers and manufacturers when it comes to offering technology for radio.

He recalled another anecdote, which although it is a specific case of television, is also frequent with radio stations: "I have two uniforms one as an engineer and one as a representative of the company in sales. In Honduras we installed the transmitters for digital TV in a chain about eight years ago. The owner of the chain the first thing he asked for was some 30 kilowatt transmitters for a city like Tegucigalpa. The negotiation was almost damaged because I, in my role as an engineer, explained that such a transmitter was excessively large for such a small city and with a high transmission point, with one of 500 watts was enough. Although the price difference was large, for me there was first professional ethics. The client insisted and told me that whose money it was, yours or mine, and there I changed my uniform, put on the seller's uniform and buy what I want. In the end he bought two-kilowatt equipment that today works perfectly and covers the entire city."

He added that in terms of technology, it is also common for some managers to say that if a certain equipment worked for an X station, you have to buy it because it will work for everyone. But this is not true, it is simply technical ignorance. It is the absence of the correct management of the equipment that is had.

These cases in which the seller also uses this ethic are not very common. In part, because not all salespeople are engineers and not all are ethical. That's why our guest insists that engineers need to be upgraded.  And it's not that they have to go back to college, because Google gives them a lot of information, the factories also have technical information available, so that then they go to the media owner and the administrator and explain the benefits of updating, of giving the listener what they want.

New digital radio model
Digital radio in Latin America is a topic that is little talked about. In addition to the technological renewal in the stations, it implies that all listeners without exception change their receiving equipment. That is one of the fundamental points why digital radio has been quiet in the region.

"And if you take into account the key factor of radio is that it reaches everywhere and that it is precisely the humble people who give it the most to consume the radio, because it is the people who go to the market, buy national, who take the bus, who have money buy abroad. If we make a digital radio and ask people to buy a receiver, being the cheapest equipment of 20 dollars, possibly the radio will not prosper anymore and will go to a very possible economic ruin, "added Rubén Navarro.

Elettronika is developing a new digital and interactive platform for FM, which can be heard from the cell phone with high quality, in addition to watching the news, seeing the announcer, how they make the programs and interact, that gives a new approach to the radio and makes it revive, starting from the idea that the radio is on the air and is heard on the cell phone and is not on the internet, where the user has to spend bits and money. This is a free, interactive and digital radio.

That is the platform that Elettronika is developing and is currently with pilot projects in Switzerland, Germany and Italy. They are small fieldwork, the laboratory to fine-tune the details. And the maximum investment made by the media owner is to update the transmitter with current technology, which would be the same as renewing their equipment and a website.

For it to be operational, a kind of additional details are required, especially legal issues, with modulation patents and single registration patents at a global level. And it is not only to register it in America or in Europe, Elettronika has particular problems as in Turkey, where no patent is respected. All these legal procedures are slowing down the process, but from the technical side they are very advanced.

"This would be a new model of digital radio but attached to the current FM broadcasters, which will not generate the trauma of other formats that three radios will give you. In this case you will have a radio on the air, with excellent coverage, with few problems, which gets where you want without buying more and without forcing users to change their receiver, "he concluded.

No thoughts on “"We are making nineteenth-century radio"”