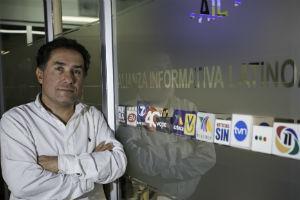 Colombia's Caracol Channel is the headquarters for the news agency that was created within the framework of the Latin American Information Alliance, AIL. It is there that news and reports from the allied channels of Latin America and the Caribbean arrive and are sent.


In a globalized world like the one we live in today, people want and seek to be informed not only of what is happening in their city and in their country, now they have a more regional vision and want to know what happens in economic, political and social matters of neighboring countries.

Latino channels and their newscasts saw the need of consumers and in response and created the Latin American Information Alliance, AIL. Today, this Alliance has 21 affiliate channels from Latin America and the Caribbean. Its director, Juan Carlos Isaza, spoke with TV Y VIDEO about the experience and what is coming for this association.

Richard Santa: How did the Latin American Information Alliance come about?
Juan Carlos Isaza: For almost a decade, we knew of the strategic need to have an operating model that would allow us to be efficient both in the generation of editorial content and in the use of production resources for the coverage of global news; especially those involving satellite transmissions.

The initial idea was conceived by Luis Calle, today Vice President of Operations, News and Sports of Caracol Televisión (Colombia); and Osvaldo Petrozzino, then News Director of Telefé (Argentina).

RS: How many allies did you start with and how many are there today?
JCI: The Latin American Information Alliance began its operation with four television channels: Caracol Televisión (Colombia), R.C.T.V (Venezuela), Telefé (Argentina) and Canal 1 (Ecuador). Today, the Alliance is made up of 21 television channels from the Americas and the Caribbean:

1. All IYP members should be leading channels in their respective countries. That is, to occupy the first places in local rating.

2. Have the human and technical resources to cover the requirements requested by the members of the Alliance.

3. We accept one member-channel per country. An interesting case has been Televisión Azteca and Proyecto 40 of Mexico, the two channels are part of the Alliance, and the two channels belong to the same business group of that country. They operate with the same resources.

RS: What was the first joint production that took place within the framework of the IYP?
JCI: There was a particular milestone with which this project was launched: the joint coverage that we carried out between four television channels of the news of the death of Pope John Paul II. Caracol Televisión (Colombia), R.C.T.V (Venezuela), Telefé (Argentina) and Canal 1 (Ecuador); We joined forces and at the close of the operation we confirmed how efficient the operation had been in terms of the use of resources, technical leverage and immediacy in the delivery of the news.

RS: What are the benefits of the Alliance for affiliate channels?
JCI: The benefits for IYP members are numerous. Just to cite one, is that its fundamental principle is to operate as a non-profit organization, which means that members should not make contributions of money for being part of the organization. The contribution is directly related to the support to the production of the newscasts of the different channels, which has allowed us to build a sustainable model of operation over time.

RS: When did you decide to create your own news agency for affiliate channels?
JCI: In 2007 we created the information service of the AIL, as a means to consolidate daily the material of the news that is generated in the contains.


RS: How does this news server work?
JCI: The news service is concentrated in Caracol Television and feeds on the material sent by the 21 members of the organization. Here we edit and organize it and then distribute it at the level of all the sharps. In 2012 the news service generated about 8 thousand news to its members; a figure that is not far from that provided by the big news agencies.

RS: How does the local special event production service work for alliance members?
JCI: Since its creation, we established that the Latin American Information Alliance, in addition to its operation for the production of news, would be useful for the coverage and production of other events such as football matches, concerts, etc., whose content would be of shared interest to the member countries.

We did so with the qualifiers to the Brazil 2014 World Cup, where Ecuavisa (Ecuador) and ATV (Peru) lent part of their technical resources for the production of the unilateral signal of the matches of the Colombia national team in these countries. In order for a member to access these resources, it is enough to contact the member in the country that requires it.

RS: What have been the main results or achievements of this alliance in its eight years of operation?
JCI: Achievements, many and of different nature. At the organizational level, we achieved the commitment of cooperation among the members of the IYP; which allows us to have today an organic, fluid operation. At the level of operations: we create work pools among the members in which we complement efforts and achieve impeccable results. Thanks to this, we have made numerous coverages of news of international relevance, efficiently, arriving in a timely and agile way with the news.

RS: Are the economic benefits for the channels quantified with the benefits of this alliance?
JCI: Giving an exact figure is very difficult. What we have been able to establish is that through cooperation, the cost-benefit gain has been absolute.

RS: What are the challenges for the next IYP congress in Bogotá?
JCI: During the VII IYP General Assembly, we will make progress in defining new plans to strengthen our growth strategy. Likewise, interesting events and news of international impact are coming, which will be an important point to review in the agenda and propose joint work plans. Finally, it will be the stage for interesting debates where news directors will talk about the editorial position of the countries that make up the organization.

RS: There are similar alliances in other regions of the world, are there work plans with them?
JCI: Yes. Partnerships are a reality and a trend in terms of news production worldwide. ENEX European News Exchange (www.enex.tv) is one of them. Its centre of operations is the facilities of the RTL group in Luxembourg; and is an organization that has about 40 members in Europe, Asia and the Middle East.  Over time, ENEX has become another of our allies, which has allowed us to exchange news and production resources that add value to more than 60 allied channels around the world. ENEX will be another item on our agenda at the next Assembly.

**Benefits for all
Juan Carlos Isaza pointed out that other tangible benefits for the member channels of the Latin American Information Alliance are:
A. To have a network of more than 9 thousand technical and professional people in television, who work in the 21 channels of the alliance.
B. Have journalistic coverage from the countries of the member channels; which allows us to have journalists, cameramen and the technical and operational teams necessary for the production of journalistic reports.
C. Have technical resources such as production trucks, satellite transmissions, cameras, microwaves, optical fibers, studios and any equipment necessary for the production of News and special events.
D. Generate the production of television content ranging from a stock image, to the production of a football match for world cup qualifiers.
E. Have the satellite distribution in real time (live) of the most important news events of the continent.
F. The possibility of having news; even before they arrive through news agencies.
E. Training and technical support between the different channels.

No thoughts on “AIL, to be well informed”