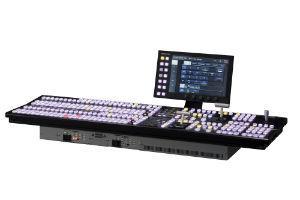 Each team has particular functions that identify the brand. The newest ones today allow you to work in 4K.


The production of live television requires a perfect coordination between all those involved in the generation of the content so that the viewer can enjoy the program without interruptions. Part of the control is achieved thanks to the switchers.

To this type of systems, manufacturers have dedicated a good amount of time in research and development, generating products that provide compatibility in these times of technological transition, such as SD, HD, and even 4K signals. The best thing for producers is that they are increasingly lowering their cost.

For this edition we have a comparison of production switchers from five manufacturers, Sony, Panasonic, Grass Valley, BlackMagic and For A, which have evolved their equipment to reach products such as those offered today.

AV-HS6000, Panasonic
The AV-HS6000 is a new live broadcast mixer, designed for production rooms and mobile units. It is the first 2 ME model in Panasonic's HS mixer range.

The main unit features 32 SDI inputs and 2 DVI inputs, plus 16 SDI outputs, while four DVEs per ME bench allow for multiple transitions in creative productions that require high-paced work. The mixer offers four independently configurable multi-screen outputs, with a maximum of 16 windows per channel.

It also has a non-volatile memory to store video clips, which can be optionally expanded to accommodate 81 clips of 30 seconds each. It features an intuitive button layout, which is completed with the 10.1-inch touchpad, which in addition to displaying the menu also allows you to display a multi-screen output.

Among its main features is that it incorporates color correctors in eight inputs and four outputs; four-input upstream converters and two-out down converters; equipped with four DVEs and two DVEs (2D) per ME bank for processing funds and keys; auxiliary buses (AUX1 to AUX4) with mixing possibility (MIX).

In addition, it has a high-quality Chroma Key in real time, based on the Primatte algorithm. By default, it incorporates a CK channel, optionally expandable to four; four keyers per ME bank (total of eight channels), with capacity for PiP. It offers four independent multi-screen outputs, each multi-screen can display up to 16 video sources.

This system is equipped with four or eight keyers on each of the ME buses (depending on the configuration). They offer layering options on the ME bus. Most of these keyers also include a resizing function that allows you to manipulate the graphics (size, position and rotation).

They also provide direct multivisor outputs from the main processor chassis. This reduces the need to invest in external multivisors. Each multivisor output can be adjusted for operation in 10 or 4 divisions; the corresponding signals are sent to each independent panel.

To support the current demand for 3D programming, the MVS-8000X can operate in 3D mode. The left and right eye signals from 3D video can be combined into a single 3G link or maintained as independent 1.5G (Dual Link) signals.

HVS-5000, FOR A
The HVS-5000 series from the manufacturer FOR-A, is a digital switching system for 3G video production, which offers simple operations and allows you to switch seamlessly between the signals of the HD and SD formats. With the optional converter card installed, the systems can support mixed inputs from the HD and SD devices. With the switch alone, it is possible to perform mixing processing and without concern for the differences between HD and SD signals.

Supports multi-reference I/O signals. Two input channels (with loop-through) and two output channels are provided. It adds an optional HVS-5GL expansion to four channels each for input and output. The manufacturer emphasizes that one of the particular functions of the HVS-5000 is the VTR tracking function. Allows automatic adjustment of keyframes.


It incorporates four-channel keyers for each ME as a standard feature. DVE 2D and chroma key are standard on all manipulators. Allows the insertion of text on the screen and subtitles for each auxiliary channel. If the four-channel manipulators in each ME are not enough, the DSKs can be used to switch to a configuration of four titular manipulators and two more manipulators, useful for live coverage or special events.

It incorporates an eight-channel store. An optional HVS-5SS unit can be added for expansion up to 16 channels. In the ME multiple, a different format can be selected for each ME. In addition, each ME can be controlled independently of the others. Real DVE 3D: Real-time rendering of mapping images for 3D shapes that provides complete 3D processing for DVEs.

It offers a machined aluminum front panel, with dedicated buttons to change the auxiliary outputs. You can use the built-in video display to monitor auxiliary or technical supervision outputs to assist during installation. They have a wide range of control options. For demanding live production environments, a 1 ME or 2 ME panel can be added.

It includes advanced 6G-SDI and HDMI 4K inputs that are SD, HD or Ultra HD switchable so you can connect to virtually anything. Built-in Multi View allows you to control switch video inputs on a single SDI or regular HDMI monitor. Multiple view outputs in regular 1080i HD, so you can still use a standard TV for format-independent surveillance.

Atem includes a wide range of high-quality real-time transitions that are available in all resolutions. Each transition is immediately available and you get full control of the transition type, pattern, length, and other attributes.

Kayenne, Grass Valley
Kayenne is a scalable video production software platform that enhances workflows by ease of use. It is designed for environments where freelancers are employed. It has the ability to be configured with full 3G 1080p and HD support.

When needed, this 1080p switch can be adapted to offer up to 192 inputs, 96 outputs, and up to nine EMs with six manipulators in each ME. The FlexiKey function allows a single switch separately for the program configurations of each ME output.

Each ME has six keyers with standard coding modes including chromakey, two frame stores per manipulator, and ME manipulators can use the floating IDPM system. The optional DoubleTake (ME split mode) increases the number of EMs.

It allows 2D DPM (adjust size) in each ME, with 6 pairs of 2D DPM per ME so that iDPMs can be used for more complex digital effects. The ME controller has a full complement of six keyers with chromakey and 2D DPM.

The Grass Valley system is equipped with integrated Image Store capable of delivering up to 1,800 still images or 30 seconds of 1080p video at 10 video outputs. 999 macros with new ways to remember macros from the dashboard.

No thoughts on “Switchers that make the job easier”