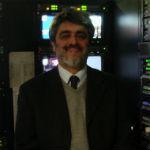 With more than 30 years of experience, Luis Silva has witnessed many of the great milestones of television in Chile and has adapted to them to become recognized as one of the most outstanding professionals in his country.

Luis Silva, the professional of the month of this edition, is currently the manager of television network technology, Chilevisión S.A., but his first steps in this industry were taken when he was still a young student of electronic engineering at the Pontifical Catholic University of Valparaíso.

At the university he not only had the academic contribution, it also opened the possibility of starting to add experience, learn about the processes and learn from more experienced technicians than him.

According to the guest, as a student he began to work in the television channel of that university, UCV Television, a channel recognized for being at the time of creation, year 1957, a pioneering proposal in the medium to be the first channel with regular broadcasts in the country.

It is also curious that the Professional of the Month was born just four years before the arrival of this channel, on November 16, 1953, so it could be said that it has grown hand in hand with the development of television in his country, witnessing its technological advances as a spectator and then as a protagonist.

Experience
Silva affirms that the beginning of his career occurred 31 years ago when he joined UCV Television, there he came into contact with the technical staff of the transmitting plant and, in addition, he had the opportunity to know in detail the operation of the available equipment, as well as the technical documentation of said equipment at a time when only paper material could be accessed.

Later, he joined the channel of the Pontificia Universidad Católica de Chile (Canal 13TV – Santiago) to carry out his professional practice. Finally a year after the internship and once he finished his last year of university, Silva joined the technical area of the channel.

Of his time in this company he remembers especially the one he considers his great guide for the development of his professional career, the renowned engineer of the medium, and former director of the technical area of Canal 13 TV, Rafael Richard Mercado, who today is already retired from the industry.

In addition, Silva highlights that during his work at Canal 13 and now in Chilevisión, he witnessed the evolution of television in Chile. For example, remember the passage from black and white to color.

"I did not have to attend that stage but I did have to operate the first equipment. I remember especially in those years, already being an engineer but working as a technical supervision assistant, that operating the controls of the Marconi Mark VII color cameras, that number of fine-tuning knobs were required to move, a real matrix of knobs, "says Silva.

In this regard, it also highlights the progress that has been experienced in terms of the sensitivity and resolution of the cameras. "Many times I have to see counts showing old images of programs in which I participated in the engineering staff and what at the time many years ago seemed to us a high quality, today turns out to be poor compared to the current state of technology," he says.

In that sense, he recalls that in his 31 years of work there have been many experiences he has lived, but among those that are most in his memory is the coverage made to the Pope's visit to Chile in 1987.

"There was a great deployment at a time when the amount of technical resources of television and telecommunications networks were few. It was possible to do a work of transmission of many places in Chile very far from the capital and in a very successful way, "says Silva.

Finally, another advance that stands out is the step from tape to tapeless, something that although in theory is simple in reality was a great step, especially since tapeless is a great facilitator for the technical and production stages. Also, the guest mentions the move from SD to HD and the stage of tests and discussions for the choice of the digital TV standard.

Evolution
Due to these changes mentioned above, Silva believes that the biggest challenge for any professional in the industry is the updating of technical collaborators. "The rapid advancement of technology and the change of platforms makes the updating process complex, but it is mandatory to carry out a professional update to the existing personnel in the channel, as well as to incorporate new personnel with adequate academic training."

In other areas of work, such as production for example, he pointed out the importance of quickly interpreting the needs and carrying out the corresponding technical evaluation to respond to them.

In addition, in terms of technology, he said that, taking into account that the engineering associated with the field undergoes a constant renewal of platforms, a deep analysis is required to be able to select those that are the best solution thinking about the immediate and long-term future.

All of the above in order to achieve the integral objective that a company in this industry must have "knowing how to recognize what the viewer requires and how, if possible, to produce and generate the corresponding content. Success is almost always in the audience of a show. The technical areas fulfill the role of facilitating the production function, it is a service area."

Similarly, it does not hesitate to highlight the importance of technical work as a basis for television production, as well as the changes at the level of technology that are becoming increasingly evident.

"In Chile, decades ago there were large technical support centers inside a station that occupied much of the daily activity, while today the roles are mainly focused on the operation with systems with uptime much higher than past times," he explains.

One point that cannot be overlooked is, of course, the implementation of digital television. In that sense, Silva believes that the forecasts that point to greater opportunities for new television networks are not as high as believed.

"The truth is that the market self-regulates the number of participants in the industry. The same was said at the time about UHF TV in Chile and the result is that although UHF TV exists today for content, marketing and technical quality, it does not actually have market penetration," he says.

No thoughts on “An evolving professional”