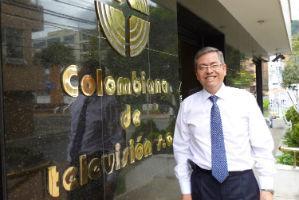 Step by step, Manuel Riveros has earned an important position in the television industry, leading the development and constant technological updating of the Colombian Television production company.


Of the 40 years that Colombiana de Televisión has been producing novels and dramatized, among other programs, Manuel Riveros has accompanied her in 30 years. And although at first he was linked to the administrative part, the experience and knowledge acquired allowed him to lead the technological changes in the production of audiovisual content.

Since joining the company, she had the opportunity to learn about the processes of a television production and programmer. He first served as an internal auditor, a position from which he had access to all areas. He then moved to systems management and later moved to Technology and Systems management, a position in which he currently serves.

"With my profession I achieved a holistic training, both in the administrative part and in the field of production and with the technological convergence and the accumulated experience it was easy for me to assimilate the technological changes in the production of audiovisual content and so it was that I assumed the position of Director of Technology and Systems, contributing from this area to the achievement of institutional objectives", indicated our Professional of the month.

Precisely the eagerness of Manuel Riveros to keep abreast of technological advances, has become his main commitment in professional matters. That is why he completed a specialization in technology management and a master's degree in business administration in internet and electronic commerce.

He says that the accelerated obsolescence of technology, which he had already experienced in the computer field, has witnessed it in the television industry in recent years, thus generating one of the main challenges of his work.

"Unfortunately in recent years at NAB we have been able to witness an avalanche of technological trends, formats and innovations that make decision making increasingly complex, because this industry has always been characterized by expensive technology. But in addition to being expensive, its useful life is reduced and that is why financially it is not easy to justify an investment," he said.

Close to the academy
Our Professional of the Month has always been linked to the academy, which has served him both for his personal and professional growth. In addition to his career as a systems engineer, he has completed different specializations in financial management, strategic it management, technology management, business administration in the new economy, in addition to the aforementioned master's degree.

But his relationship with the academy is not only as a student, because for 20 years he has been linked as a teacher in several universities, including the School of Business Administration, EAN, undergraduate and postgraduate, as well as Sergio Arboleda, Santo Tomás and Antonio de Nebrija in the master's degree in business creation and management.

Also highlighted in his academic what to do is the book Information Systems and Administration, which he wrote between 1996 and 1997.

All these academic experiences he tries to apply them in his day-to-day work, which usually begins very early in the morning, reviewing the main measurements of the audience of television channels, emphasizing the marking of the productions on the air of Colombiana de Televisión.


"I also review the main work fronts, both in production, post-production and in the IT area. I have contact with my closest collaborators and I make a thorough review, both of the agenda and the mail, of the editing rooms, musicalization and in some cases visits to production outdoors and in our studios, "he explained.

In addition, he participates in different committees in which great synergy is generated with the other directions of the company. From its direction it has committees in the morning for the technical, bidding and new business areas, which facilitates the monitoring of each of the processes. He assures that the departure time is, as for everyone in the television industry, uncertain, "it is not always when one would like".

Great challenges
One of the great challenges that Manuel Riveros has had to face as director of Colombiana de Televisión, has been the technological adequacy of the production company, at a time when technology was in development. According to him, this situation dates back to 2005, when the risks of equipping production and post-production teams with a new workflow were very great, because it implied a substantial change in the way of producing dramatized.

"Fortunately we managed to implement the flow with great success. At the computer level we have very interesting In House developments, both in the commercial area and in the production area, in which an information system was developed that allows us to integrate the workflow from the preparation of the scripts, through production plans and control, to the final payment of the talent involved, reporting directly to the company's ERP."

The relationship with his work group is a constant challenge, as he points out that one of the most complex issues is knowledge management and talent retention, because, in many cases, they cannot retain talented people because it would slow down their professional development.

"Colombiana de Televisión has been the cradle of many talents in the technical field and especially in the artistic field, in series such as Padres de Hijos, which had more than 17 years on the air or Mujeres al Límite, to name just two, which have been the launching pad for many of the stars of our television."

**Family and football
Being born in the choachi municipality, near Bogotá, the Colombian capital, generated Manuel Riveros a taste for the countryside to the point that he declares himself a nature lover. For this reason, for ten years he has dedicated most of his free time to a family farm.

This hobby he enjoys in the company of his family, made up of his wife Mayte Reina and their two girls Mariana and Manuela of seven and ten years. With them he also enjoys trips and gastronomy, he also tries to share as much time as possible with his family.

Another of his great passions is sport. In his free time he usually practices squash, swimming and, as an amateur, follows everything that has to do with football.

"I am passionate about football although I do not practice it, I suffer a lot with the Colombia national team, especially when it does not play well and also loses. The same thing happens to me with my soul team, Millonarios, which I have not seen a decent campaign in recent years. Internationally I am a Real Madrid fan but I must admit that Barcelona in recent years has been much better. I also admire Manchester United," he said.

No thoughts on “Overcoming TV challenges”