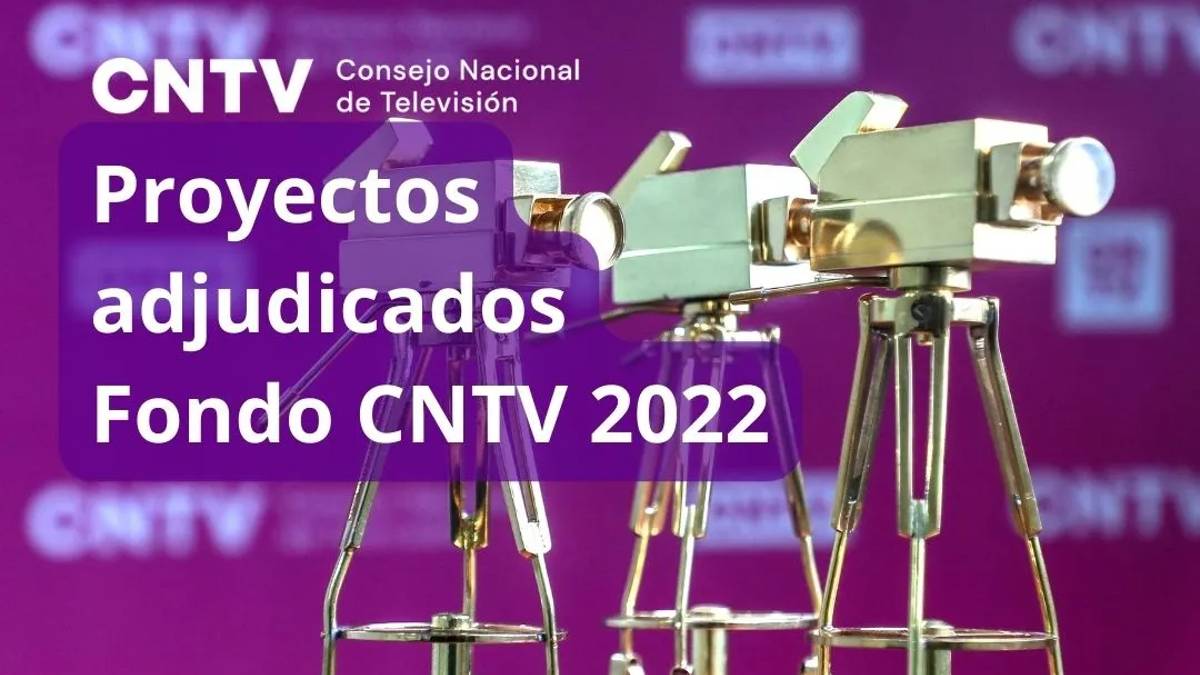 Chile. Version 30 of the CNTV Fund recognized a total of 19 audiovisual projects, which this time awarded more than four billion Chilean pesos (about US$4.28 million) to finance quality programs on open television.

For the 2022 edition of this public contest, 92 projects in eight lines were submitted, being finally financed four initiatives of regional origin, two historical series, two non-fiction programs and an equal number of fiction programs, as well as two new seasons, two productions for preschool audiences from 3 to 6 years old, and two children's projects for children from 7 to 12 years old.

This year the CNTV Fund celebrates three decades financing quality content, for a total of almost sixty billion pesos invested in more than 470 national productions. The milestone of the 30 years of the CNTV Fund will be commemorated on October 6, with a ceremony to be held at the Gabriela Mistral Cultural Center in which it is intended to bring together the producers who have participated in the contest to be part of the celebration of this public policy. In the same ceremony, the traditional "camera" statuette that recognizes the projects awarded to the Fund will be delivered.

According to the president of the CNTV, Faride Zerán, "It seems to us that in these three decades the CNTV Fund has made a tremendous contribution to the development of quality content on television, which not only contributes to cultural heritage, but is also remembered with affection by audiences. That is why we are interested in promoting this public policy, also incorporating new lines in its development for the coming years, such as a line of native peoples. There is a strong demand from citizens to be reflected on screen and we want to be active in that sense, "says the journalist.

The CNTV Fund process, whose bases are published on the Council's institutional website, has two evaluation stages: Financial Technician (ETF) and Content (ECA). In these evaluation stages, the concordance of each project is weighed with the values expressed in the law that mandates the CNTV to deliver this fund; the feasibility of the projects; the interest for the audience, the audiovisual and plot proposal; the level of innovation; the exportable potential and the capacity of the responsible team. Finally, the projects are awarded by the CNTV Council, which informs its reasoning through the minutes in which the subject was discussed. The results of the process are already known to the applicants.

The director of the Department of Development, Daniela Gutiérrez, points out that "The CNTV Fund is the only one that finances the production of programs for open television in Chile, and our focus is to promote the quality of these, both with respect to the diversity of content, impact for audiences, attractiveness and entertainment of the proposals. This 2022 they applied for very interesting projects that were very well evaluated, of which the directors chose 19. We would like to finance many more, but unfortunately production costs were strongly increased with inflation, so the amounts we have are not enough for more awards."

Projects
"Los mil días de Allende" is one of the projects that obtained financing in the line of historical series. The series presented by the producer Parox aims to narrate the last three years of Salvador Allende in six chapters, delving into his human and political aspects ad portas of the 50th anniversary of the coup d'état and his death. The other production benefited in the line of historical series is "Treasure under the sea", presented by Cábala Producciones. This series aims to make a journey through time from the arrival of the first inhabitants to the American continent through surprising archaeological findings in Chile and Latin America.

In the line of fiction, the series "Isla Friendship" was awarded the fund, a fiction that seeks to narrate the strange events and mysterious disappearances that occurred in the 90s in the southern part of the country. "Mars" is an eight-part fictional series that tells the story of a girl from the Atacama Desert who seeks to become an astronaut through a NASA contest.

In the line of Non-Fiction, there were two projects that were awarded CNTV Funds for its realization. Presented by Cábala Producciones, "Ni una Menos", is a documentary series that from real cases of femicide and gender violence seeks to account for the influence that feminism has had in Chile and Latin America. The second project benefited is Ciencia Pop, from the production company GVG. A series of 16 chapters inspired by the successful books of the scientist Gabriel León that seeks to bring science closer in a playful and entertaining way.

In the line of regional origin, four productions were recognized: the documentary series of spies "Diary of an Infiltrator", by Biosfera Films of the Valparaíso Region, narrates through documents, filming and photographs everything lived before, during and after the coup d'état in Chile in 1973. "Memoria Férrea: Historias y vidas en torno al Tren", presented by Húmedo, which seeks to reconstruct the culture around the train of the Biobío and Ñuble regions; "Mi nuevo Estilo de Baile", by Molotov Cine, also from the Biobío Region, which tells the story of a group of young rebels from the province who come together to fulfill their dream of creating a rock band from which to fight against the military dictatorship. And finally, "Spirits of Mud", from the Region of Los Rïos and presented by Guairao Producciones. In the series we will travel with a ceramics student to delve into the craft of pottery and its multicultural connections.

In the lines aimed at our most demanding audience - children - two projects were benefited in the Infant line from 3 to 6 years old, and two in the Children's line from 7 to 12 years old.

From 3 to 6 years old, the projects "Boca Sucia", presented by Hera Management, is a comedy with a formative vocation, which tells the story of Ramón Boca Sucia, a 10-year-old boy who has difficulty expressing himself without doodles; and "Alonso y Cachudito", by the production company Gecko Animation. A children's fiction, educational and musical series with a gender perspective, which narrates the adventures of Alonso, an adorable and curious 5-year-old boy, and his friend Cachudito, a chatty little bird.

And from 7 to 12 years old, CNTV funds, "Attention!", from Kungan Project were awarded; production that shows the mission that a group of 4 friends between 8 and 12 years old has proposed to rescue the attention of children in Chile who have been kidnapped by the screens; and "Question of Mind"; presented by La Factoría. Children's series that accompanies the day to day of three curious children: the scientist Incognita Constante, the distrustful Mala Espina and the clueless, but adorable Bucle, who inadvertently awaken Cuestión, an entity in the form of a brain that keeps all the knowledge of humanity.

In the line of local and local interest of a community nature, the projects benefited are 3: "Between the Mountains of my Neighborhood: The Children of Olga Leiva" of Cinema GIrasol of the Metropolitan region, which portrays the history of the children of the Olga Leiva neighborhood of Peñalolén who must live with the difficulties of being part of a vulnerable community. "Habitar el Valle" presented by TVO, from the Region of libertador Gral. Bernardo O'Higgins", which shows life stories of the settlement process of 4 towns in San Vicente. And "Rescatados" by Axis Mundi Producciones de la Región de Coquimbo, which addresses the reality of its particular protagonists; companion animals, tutors and rescuers, going from abandonment to being rescued.

Last but not least, in the line of support for New Seasons, the recognized projects are aimed at children. These are the second seasons of "Locos Lab", by Dinogorila Creative Lab; and "Mundoperro" by Zumbástico Studios. "Locos Lab", proposes to entertain in each episode with a crazy adventure full of science, adventure and comedy in which Nina -its protagonist- will be in charge of ordering her family to return to "tranquility". "Mundo Perro", meanwhile, continues the adventures of Ciro, a country dog, who arrives in the city when he is adopted by Sofia, a 7-year-old girl, and must adapt to this world of new things.