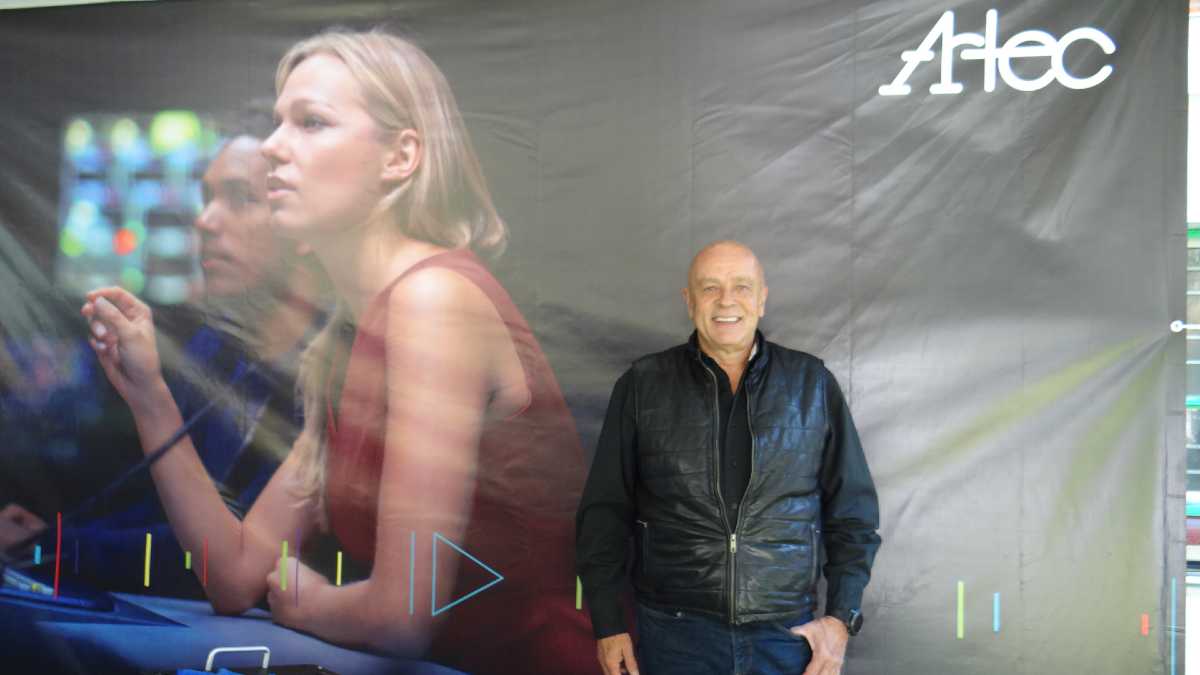 In addition to integrating and selling technology, Artec has developed two systems to support content production.

Jaime Tovar has been a witness and protagonist of the Mexican broadcast industry for more than three decades. Since its inception as a producer and then as a technology distributor, it has been able to combine these two activities throughout its history.

He shared with TVyVideo+Radio details of his experiences and how he sees the future of the industry with this technological evolution that has accelerated in recent years and in which his country plays an important role in regional audiovisual production.

Jaime Tovar is an Industrial Engineer. He joined the broadcast industry before finishing his university studies by joining an advertising agency in which they made the 35 mm transparencies for business presentations and there they began to use the first computers of four colors and then those of 264 colors.

"That was the beginning and then I started doing technical animations. One day we started reading about Avid 1, the first model that came out. We decided to buy one and that's why I traveled to the United States directly to the Avid factory and brought it to Mexico, at the time of the closed borders. It was the first Avid in Mexico," he said.

Avid had at that time a local distributor who was an expert in video, but computing, which was new to television. The distributor asked them for help to give the demos of the equipment and to install the first ones that arrived in the country. There arose the idea of Avid to appoint him distributor of the brand, coinciding with the moment in which Jaime Tovar became independent of the advertising agency and created his own company, Artec. From that history 30 years ago.

Battle against the human eye
"In these 30 years the television industry has evolved tremendously. It is an industry that is always evolving and the only constant thing is change. We have seen many changes since we started, such as format changes, technologies, it is a continuous and constant search for improvement in the image, it would seem like a battle against the human eye. What is going to end up seeing better, a screen or the ability of the human to see?" he said.

This question is asked because today we are in 4K, you can already see teams in 8K and it continues to evolve and rise. He added that the point is going to come when the human eye will not be able to see more than what technology offers and at that point the development begins to lose meaning, because, he said, why develop beyond what the human eye can see?

On these changes in the industry, he stressed that "Right now what I see coming is a radical change in the paradigm of television. Because now linear television has lost a lot of ground to OTT and streaming channels. I don't think it's going to go away, but it's going to be limited to live events, like sports and news. While entertainment and unitary programs will increasingly migrate to OTT. That is the big change and it will also look for the best image and the best audio, but the means of massification of the signals will not be open television."

Constant updating
Jaime Tovar acknowledged that this technological evolution has kept them very active in Artec. The company has specialized in post-production in all its processes, such as color correction, audio, animation, among others, that has been the area of experience and that has a constant progress. That is why the strategy has been to update.

"It is an obligation to always be updated, to know the latest advances and that represents a challenge. Today there is a new generation of experts in the digital world, as we were 30 years ago when computing was just beginning in the industry. That is why we only have to continue updating ourselves and staying at the forefront of technology, which has always been one of the characteristics of the business," he said.

And that is precisely the main challenge that points out to be able to have a company that celebrates 31 years in the market, the continuous updating through shows, expos, courses and, the most important, the continuous training of the staff. For Artec it has always been key to have certified technicians. "Now in times of pandemic it happened quite naturally, because the courses began on Zoom and there was an opportunity to train in our technologies and in others and we took advantage of all the ones we had at hand."

Even these processes continued in the pandemic. He recalled that the business changed in the sense of personal contact, training outside of Mexico became online. That is why the challenge was to maintain and there were many people in the industry who followed, because the population had the need to entertain themselves at home and television became fundamental. That's why they continued to provide technical support to television stations and support independent producers.

A proud father
Jaime Tovar speaks proudly of his two sons. Fernanda is a film director, has a master's degree in photography and has taken advantage of the experience and equipment that her father has. His second son, Santiago, is a racing driver, competing in NASCAR. They bring together Jaime Tovar's two great passions, technology and car racing.

"I am a very fortunate father and very proud of my children. I come from a family of riders, my dad raced, I ran motorcycles, cars and everything that moves, and now my son, who has definitely been the most successful of the three generations. He currently races in Nascar and in the Super Cup Championship of tractor-trailers. We are very involved and very current in this issue," he said.

Future of the industry
Finally, on the future of the audiovisual industry in Mexico, the founder of Artec pointed out that his country is a very attractive place, not only because of the costs of labor, but also because of the places and locations to film. In addition, Univision's merger with Televisa will strengthen production in Mexico.

"On the other hand, we see a lot of production in this country. I believe that somehow it will become a large production center, even for producers from other countries, not only for the economic benefits, but also for having all the technology available locally, because the most avant-garde equipment that exists in the industry, are in Mexico. I think the future looks good," concluded Jaime Tovar.

No thoughts on “Witness to the history of Mexican TV”