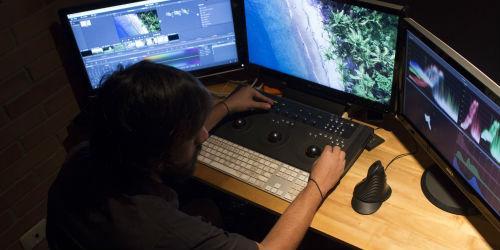 Leo Fallas wanted to bring color to Costa Rica in a "tropical" way, providing high-quality and affordable color correction to his clients. And he succeeded.

When Leo Fallas founded Chángula Postproduction in 2002, he wanted to provide a bridge between the U.S. film industry and Latin countries, such as Costa Rica, which were developing their local film industries with an identity of their own. At the time, there was a need for an accessible non-linear editing room in Costa Rica, so Leo decided to take matters into his own hands.

"Because there wasn't that kind of room where I lived, I decided to build one myself. I built a suite based on a new editing system with all the necessary post-production equipment. And the business took off quickly," Fallas recalls.

Leo's immersion in the post-production industry began in the 2000s. With a growing list of projects to his name, Leo received a scholarship to attend the prestigious and creative Centro de Capacitación Cinematográfica, based in Mexico City. Taking advantage of the opportunity to learn, Leo attended college in order to learn about the workflows and science behind color, to get a broader view of the post-production process.

More than learning the fundamentals of color and light, the opportunity also allowed him to learn how to handle the new codecs, and formats of the new cameras, at a time when digital formats were beginning to gain ground.

Leo took several color correction courses as part of his academic program, using a professional coloring suite; he was very excited about the possibility of bringing his new knowledge to the company. However, he ran into a problem.

"When I came back, I started looking for a color system for my company, but I soon realized the prices. The cost didn't align with the Costa Rican market and I felt hit a wall. Then, all of a sudden, Blackmagic DaVinci Resolve came out. It was the technological solution I was looking for."

Leo Fallas wanted to bring color to Costa Rica in a "tropical" way, providing high-quality and affordable color correction to his clients. And he achieved it with the Blackmagic Design system. Every month, Changula Postproduction's busy office juggles three or four advertising projects, plus documentary films, independent films and feature films. To this day, Leo continues to expand his knowledge through frequent trips to the United States, where he attends conferences, such as the exclusive Editors Retreat, and returns with new ideas for Costa Rica and the classes he teaches.

The present of Prisoners
One of the most successful projects Leo has worked on to date is the film Prisoners. Directed by Esteban Ramirez and color-corrected by Leo at a DaVinci Resolve studio, the film centers on a girl who triggers a family drama by beginning a secret relationship with a prisoner.

Leo's main challenge to the film was to create a contrast through color between the individual worlds of the girl and the prisoner. I wanted to maintain the feeling of two different realities, but ensuring that both worked in a coherent way.

"For the scenes in the prison, we tried to get more de-saturated and contrasting images than the others, so that they reflected a darker environment. All the other scenes have a lot of brightness and color imitating the life of the girl with her family," says Leo.

To help better contrast the difference between the two worlds, Leo used Resolve's split-screen feature, which allowed him to simultaneously compare on the color monitor the subtle differences of three planes inside the prison and three outside it. It was the perfect way to mark the transition from one scene to the next, and show the director and cinematographer not just a single shot, but each shot in the context of the scene.

Leo also made use of several secondary color correction functions, in particular the hue vs hue curve. He enjoyed the ability to make very big changes with small clicks and simple movements, speeding up his work.

"I had the opportunity to change from one color to another with two clics in one of resolve's most characteristic curves, hue vs hue. We achieved very smooth changes that we all loved."

During the start of the project, Resolve helped Leo work closely with the film's cinematographer, who greatly appreciated his opinions.

"I love using super soft power windows and masks that are so subtle, that the viewer doesn't notice they're there. At first, the DP was against these windows and masks. By using Resolve, I was able to show you the changes in real time and get your approval; the final correction uses a large number of masks to perfect the color, especially in the skies. We both agreed that the results were perfect," Leo explains.

Documenting the future
Leo is currently working on a documentary project called First Lady of the Revolution, with American director Andrea Kalin of Spark Media. The documentary details the life of Henrietta Boggs, the first wife of Costa Rican President José María Figueres Ferrer. It chronicles his youth in Alabama, the story of the Costa Rican revolution, and how he finally came to know the beloved president.

The film was shot in Alabama, Washington and Costa Rica. When Director Kalin asked a colleague of Leo's if he knew a good color correction artist, Leo's name came up immediately. Because Andrea had already seen and remembered her previous project, Prisoners, she decided right there to hire Leo as the expert colorist for the documentary.

Leo used version 12 of DaVinci Resolve Studio to color and graduate the project in as little as 15 days. He concluded that "With so many different formats and textures, I had to use a large number of plugins as part of the tools, so having OpenFX within Resolve helped me level some of the scenes. We also faced a lot of noisy images, so the noise reduction tools were absolutely critical to this project."

The full project will be unveiled in September 2016 during Costa Rica's Independence Day.

No thoughts on “High quality post-production in Costa Rica”