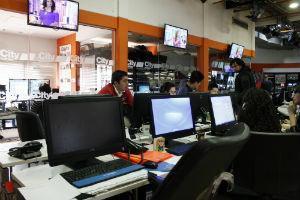 In CityTV and El Tiempo TV are updating the systems due to an issue of obsolescence, some of the equipment had already been many years old and the intention is to have the entire production chain in high definition.

For three years City TV, the local television station in Bogotá, Colombia, began a process of renewal of its technology in order to prepare to broadcast a signal in high definition. This update was designed in stages, starting with the master's degree and the newsrooms. Today they are in the process of the last two stages with the goal of starting to transmit the signal in HD no later than the first quarter of 2016.

At the head of the team leading the update is Walter Gómez, Operations and Engineering Manager of the channel, which operates both the signal of City TV and that of El Tiempo TV, the news channel of the newspaper El Tiempo, one of the most important in Colombia and owner of CityTV.

Walter Gómez explained to TVyVideo+Radio that "three years ago the updating of the channel began stage by stage, due to the need to replace equipment that brought a use of 12 and 13 years. First the master's degree update was done, then the news editing rooms and now the variety studies. With the two processes missing, we would complete the update to start broadcasting an HD signal."

The penultimate stage of the update that is currently underway, began with the design process since last May. This is part of the headquarters known as Avenida Jiménez, in which the Unity system, which is already some years old, will be replaced by a completely new Avid system with Isis 5000, AirSpeed 5000 and an Interplay, also all the suites for the 13 editing rooms and the Protools system.

In September, the process of buying and importing the equipment was carried out. By the end of November they should be installed.  In this headquarters about 60 people work and has the master's degree of main edition with all the part of the satellite, of ascent of the two channels and the studies of varieties, where they are dramatized live, contests and magazines.

"In the other headquarters is the entire information system, it is located in the same building where the newspaper El Tiempo is. There we have all the news part of both channels and we have Avid systems installed a year and a half ago, composed of an Isis 5000, a 13 editing rooms with the Newscutter system, which additionally has the Interplay system for the management of flows and an Inews system, "added Walter Gómez.

A trajectory relationship
Since the channel was installed 16 years ago, it has always worked with Avid systems. The CityTV executive explained that "Avid is a brand with which we have had a fairly strong relationship since the beginning of the channel. We believe that it has the entire workflow optimized in such a way that it is very efficient in the management of the times of intake, editing, post production and sending to the air of the contents that are made. We believe it has the most robust solution for a TV environment where you need reliability and speed to be able to edit the content and get it on the air."

There are two Isis 5000 systems that the channel is installing. One of them exclusively manages the news area, attending the usual broadcasts of 6:00 a.m., 12:00 m and 8:00 p.m. with news advances every hour and the El Tiempo Channel within the 24-hour news strategy.

This ISIS/Interplay system with 64TB of storage is complemented by about twenty Media Composer/NewsCutter publishers and managed by the iNEWS system. For ingestion and playback they use the Avid AirSpeed line.

The second Avid ISIS/Interplay system with 128TB of storage, which is being deployed in the penultimate stage of the upgrade, will work at the Avenida Jimenez headquarters serving a similar number of Avid Media Composer editors (some with Symphony plug-ins) and a couple of Pro Tools systems.

"The entire channel works with Avid editing systems. It is a close relationship that is due to the technologies and the accompaniment that during the 16 years of existence of the channel has given both from the company and its distributor in Bogotá, Videoelec. Both have given important support from the implementation of the systems as in the operation, maintenance and emergency care when you have a problem in the channel, "said Water Gómez.

He added that the relationship with them is close and they have always had an efficient and fast support, they have a qualified staff, professionals with knowledge that allow them to operate with peace of mind, which is what is sought in an environment like CityTV, especially news where you have to be on the air on time, take out the contents that are edited live, and where in case  you have a problem, you have to solve it quite quickly. For that they need a fairly robust system like Avid's and a support like the one provided by Videolec.

On the possibilities of implementing 4K with the updates, said the CityTV engineer that taking into account the content they make, which is basically news, the issue of 4K will not drastically impact in the coming years. "This is important for those who make series and dramatized, who need a very high bill. That's why we believe that 4K is going to be away from us in time. Obviously, many of the products that we are going to acquire come with 4K functions or with a software update you can have this system."

El Tiempo TV has a dynamic format of textual and graphic information at the bottom and side of the screen with news information, reducing up to 35% of the image of the transmission.

Walter Gómez stressed that City TV is a local channel for Bogotá with two analog transmission stations and another one with DTT that was turned on last March. El Tiempo TV is a channel that is transmitted through cable with a 24-hour signal with a national focus. "We are working to generate new TELEVISION products that will be seen next year. We hope to boost one of the two channels to have a larger audience."

Since its inception, CityTV has worked with Avid, first with publishers connected to the former MediaShare, through Unity Media Network to a current Isis/Interplay/AirSpeed/iNEWS infrastructure that is fully coordinated, stable, reliable and successful.

At the end of 2015, CityTV will only have pending the update of the broadcast master's degree, with all the base infrastructure, to be able to start broadcasting in HD in 2016.

One thought on “CityTV prepares to broadcast in HD”