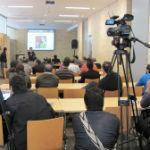 Colombia. The topics that professionals of the television industry of the Andean Region will be able to see in the Academic Program of TecnoTelevisión 2013 are defined, conferences that are in accordance with the needs of the industry in the region and new technologies worldwide, formed with the support of the Advisory Committee.


Focused on television production and post-production, we will have conferences on transition from production to HD for production companies and television channels; live HD production focused on sporting events; creation of transmedia and crossmedia content; marketing of content based on the latest trends in audiovisual consumption; and how to create successful virtual sets.

In addition, topics such as the different video platforms for new forms of transmission and consumption of audiovisual content on the Internet will be addressed; It will also talk about how the regulation of internet video is being addressed, is it television or general information?

New developments will feature an introduction to the next generation of video production technology, 4K. Finally, the future of free-to-air television with digital television and new technologies will be analyzed, from various points of view between channels, producers, critics and regulators.

We are also working on a second conference room dedicated to subscription television operators and from which the conference programme will soon be published.

To learn more about the 2013 Academic Program visit www.tecnotelevision.com. Remember that TecnoTelevisión 2013 will be held on July 31 and the first of August at the Corferias Convention Center in Bogotá, Colombia.