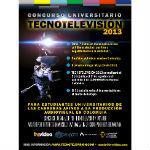 Colombia. Aware of the importance of students as future actors in the television industry, TV Y VIDEO magazine proposes the TecnoTelevisiòn University Contest, aimed at all students of careers related to audiovisual production in Colombia.


Supported by the Pontifical Bolivarian University and the Atico Center of the Pontificia Universidad Javeriana, the TecnoTelevisión University Contest seeks that students present an audiovisual piece of maximum five minutes, of free gender and format but with a common theme: How the technology of common use affects, positively or negatively, society.

University students who wish to participate, either individually or in groups, must register on the TecnoTelevisión website and have a deadline to submit their work until Friday, May 24.

The jury, made up of three leading industry professionals, will choose five finalists from among all the contestants. A representative of each finalist group will be invited to Bogotá with all expenses paid to participate in the TecnoTelevisión Academic Program and in the award ceremony.

The winner among the five finalists will be chosen with virtual voting between July 15 and 31, as well as physically during the first day at the TecnoTelevisión Commercial Exhibition. At the end of July 31, the winner will be announced.

The creators of the winning audiovisual piece of the TecnoTelevisión University Contest will have a profile in the magazine TV and VIDEO highlighting the audiovisual piece and the person/group making, training at the Centro Atico of the Pontificia Universidad Javeriana and a television production team.

TecnoTelevisiòn will be held on July 31 and the first of August at the Corferias Convention Center in Bogotà, Colombia. To learn more about the contest and register, click here.

No thoughts on “The TecnoTelevisión University Contest arrives”