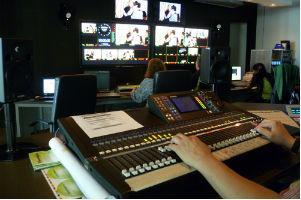 The project of implementation and execution of the new headquarters of the Colombian regional channel Teleantioquia lasted six years. Thus, he was prepared to face the changes that television will have in Colombia in the next 10 years.


As part of a macro project called Plaza de La Libertad, in which Teleantioquia would be a fundamental part, the idea arose about six years ago to create a new headquarters for the regional channel.

Thus began this dream, which consisted of providing Teleantioquia with a new headquarters with everything necessary to take on the new challenges of regional television in Colombia, appropriating the best technology that could be purchased at the time. The project was led by those who at that time served as channel manager and governor of Antioquia Ana Cristina Navarro and Aníbal Gaviria.

For this, it was resorted to evaluating the market and looking at what was the best technology for the type of company and with reasonable costs that would allow its acquisition.

An automation and traffic system was implemented, fed by two studios fully equipped with their respective masters (control room), supported by two mobile units plus a post-production center that was integrated into the workflow to feed a 24-hour content programming with its own production of more than 80%.

The complete system was integrated by SEEL S.A. plus Teleantioquia's Technology management unit.

The regulatory frameworks were not the motivators of the project, although since its inception until today they have changed a lot, because in Colombia the National Television Commission disappears and its functions are assumed by ANTV, CRC, SIC and ANE, and a new television law is awaited.

The system that was previously had, was a system consisting of a studio of 100 square meters equipped with three Sony BVP 550 cameras, in an operating area of 1,000 square meters, supported by a VSN guideline emission system and a software of own development to keep the records of pattern and emission control, plus a mobile unit.

The current system consists of two studios of 400 meters each, in an operating area of 5,000 square meters, with three cameras per Sony HDX100 studio and Arri lighting with 110 circuits per studio, supported by an ETC dimmer of 120 circuits each studio.  Additionally, there is a production master (control room) equipped with Switchers Ross of two MLE and 32 HD / SD inputs, character generator and Branding Channel system of Chyron, Telepromter, Yamaha digital audio console; dimmer control console and video control with Tectronix raster.

Also, all the broadcast was automated with redundant VSN components and a traffic system also of VSN, which allows the programming, supervision, control of the emission and guideline, linked to the commercial unit with the programming unit and the financial area in a single system.

Everything runs under an infrastructure designed for 3G that is linked to an Evertz matrix of 124 crossing points that allows to route and interconnect the different signals used in Teleantioquia, supported by an infrastructure provided by the company Evertz for signal processing.


A Telex intercom system was provided that allows the communication of any of its rooms, finally everything converges in a broadcast master with a Grass Valley master siwcher with everything necessary to broadcast audio in 5.1, and all the contents to be broadcast are made available to the end user via streaming or through teleport.

All of the above is supported by five Avid editing rooms, plus two mobile units designed for the production of events at six cameras each.

In order to realize all this technology-based dream, Teleantioquia engineers were used plus the support of the company SEEL S.A. in design and implementation. The two work teams made the necessary designs plus the necessary updates, which were presented over time according to the technology offered by the market. The company SEEL S.A. was in charge of the assembly of the entire system.

At the beginning, the general descriptions of the equipment to be acquired were made, quotes were requested from different companies with their respective brands that represent them and according to the design requirements, characteristics and best prices, the equipment with which the new systems would be integrated were chosen.

For each process in general, three brands were sought that had representation in the country, that met the design characteristics and an excellent after-sales service.

The entire television system was designed to face the next 10 years of changes, including DTT, multichannel, mobile distribution and convergent media.

At the time of implementation, some normal problems arose in projects of this magnitude, but they were almost all logistics in terms of the delivery of the work and the implementation schedules, since a large amount of time was spent on the design table and this avoided having technical problems in the end.

All the technology was chosen in relation to three main concepts: cost, quality and after-sales service.

It was based on the experience of the technical team of Teleantioquia accumulated for more than 26 years plus the Company SEEL S.A, for which a technological line was projected to face this challenge and acquire functional technology for four years that would allow it to be integrated at the end of the project.

The operation and integration of all the equipment has been the best, being able to have the best functionality and the highest performance in each of the processes involved in the production, broadcast and transmission of our contents.

Our end user has a better image either through their TV, their mobile equipment or if they see us via the web. Being able to enjoy a high quality signal, for the immediate future and with the entry of DTT, we hope to have high definition television in homes before the end of 2012

*Carlos Arango belongs to the technical direction of Teleantioquia.

No thoughts on “Teleantioquia opens headquarters”