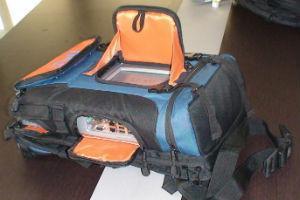 Colombian police found in an image transmission equipment designed for television, an aid to control protesters. Now they plan to massify it in riot control units throughout the country.


When the creators of the LiveU were designing the first prototype of this video transmission equipment about six years ago, they were looking to generate a new technology that would allow the television industry to facilitate their work.

But they never thought that this team would become a fundamental tool for the police and their work of controlling demonstrations, both to identify those who use violence during protests and to use the evidence videos in the face of constant allegations of abuse of authority in their work.

The Colombian police's Mobile Anti-Riot Squad, Esmad, is the pioneer in using this equipment to its advantage. It is currently structuring the project that will massify the use of LiveU in the 13 units that are distributed throughout the country.

Colonel Rafael Méndez Castro, coordinator of Esmad in Colombia, explained to TV Y VIDEO the details of the project that must be implemented among the police officers under his command in the country.

First tests
May Day is a traditional date on which riot squads have a lot to do. As a new day of International Labour Day is commemorated, unions and their members take to the streets to demand better working conditions, but unfortunately a minority group prevents these marches from concluding peacefully and most of the time they end in clashes with the Esmad.

For this reason, said Colonel Rafael Méndez Castro, the pilot test with the LiveU was carried out just that day during the surveillance of the marches in Bogotá, capital of Colombia, with very good results and a great acceptance by the national leadership of the police.

"One of the squad members carried the briefcase with the equipment on his back and on his shoulder a professional P2 video camera. But to prevent the demonstrators from attacking him, he had to be protected by three other of his companions, who were in front of him," he explained.

The images of the camera were transmitted from LiveU 60 to the crisis room of the metropolitan police of Bogotá, in which the director of citizen security of the entity, General Rodolfo Palomino, was closely following the operation, guiding and pointing out the areas where the police officer who was carrying the equipment should go.

One of the advantages of the test was that the police have a good state-of-the-art video system in their crisis rooms, so connecting the LiveU transmission to the screens was not difficult.

Problems to be solved
After the test carried out, there are two problems to be solved: one of a technical nature and another of security. This was pointed out by Luis Osvaldo Fajardo, representative of Imdicol Ltda, the distributor of LiveU for Colombia and in charge of advising the Colombian police on this project.

"One of the aspects in which we must work is that of the camera with which the images will be recorded, because when doing it with a professional video camera, the result was the best, but its size made it striking among the demonstrators, in addition to being uncomfortable for the policeman who must carry it, who was at high risk, "- " Indicated.

He added that the army has a small camera that they attach to the helmets and that allows them to record their operations in the field. But this camera would not be useful for the police and the functions they want to have with the LiveU, because it does not have zoom which would reduce the possibilities of surveillance and control in the demonstrations.


For that, Imdicol is looking for other options of cameras, handycam type, that are easy to adapt to the helmets or other parts of the uniform of the Esmad policemen, in such a way that they can take more advantage of the situation.

The safety of those who load the equipment is also a risk factor that they must evaluate. Deputy Mayor Edwin Dussan is another member of the riot squad who has been aware of the project and the test conducted on May Day.

He recalled that that day, when the demonstrators noticed that there was a policeman with a camera in hand recording, they took out their cell phones and cameras to register them and shouted that they were recording them illegally.

How is the project going?
Both the Colonel and the Deputy Mayor stated that the national leadership of the Colombian police were very happy with the results obtained with the initial test, because they managed to quickly identify those who started the riots and from the crisis room there was absolute control of the situation.

Luis Osvaldo Fajardo stressed that with the LiveU they managed to have better images of the march because they were taken close to people, detailing their faces, which they could not do before when they were followed only from the cameras located at the top of a column and that only transmitted general plans.

Currently, said Colonel Rafael Méndez Castro, the police leadership is evaluating what will be the best model to follow to implement video accompaniment among the Esmad squads, whether to buy the equipment or take it for rent, since the two options are provided by the LiveU distributor in the country.

The initial idea is to provide each of the squads with a transmission equipment, which is controlled directly from the crisis rooms located in the different metropolitan police commands or in the municipal administrations.

The size of the team
Another drawback of the implementation of this new work tool in the anti-riot groups of the police is the size of the LiveU. The pilot test last May was done with the reference 60, which is a size similar to a 14-inch laptop and requires to be loaded into a special suitcase, which while very useful for television, for the police is a risk factor.

But in the medium term this situation could have a solution, because in the European market and the United States they have been working for a few months with the LiveU 40i, a much smaller team that could directly facilitate the work of the police.

Unfortunately, this reference in Colombia still cannot work well, because it reduces the ports of simcards, which are the means of internet connection with which the LiveU units work. The four units can't cope with streaming high-quality video.

"We are waiting for the company Une to start operating with its 4G networks, with which we have already tested and a simcard can give us about two gigabytes. If we take into account that the minimum amount needed to transmit video with the LiveU is 800 megabytes, Une would be a perfect provider, but that service will only begin to operate in Bogotá and Medellín, that is, in the remote regions the 40i could not work, "concluded the representative of Imdicol.

No thoughts on “LiveU, a tool of the police”