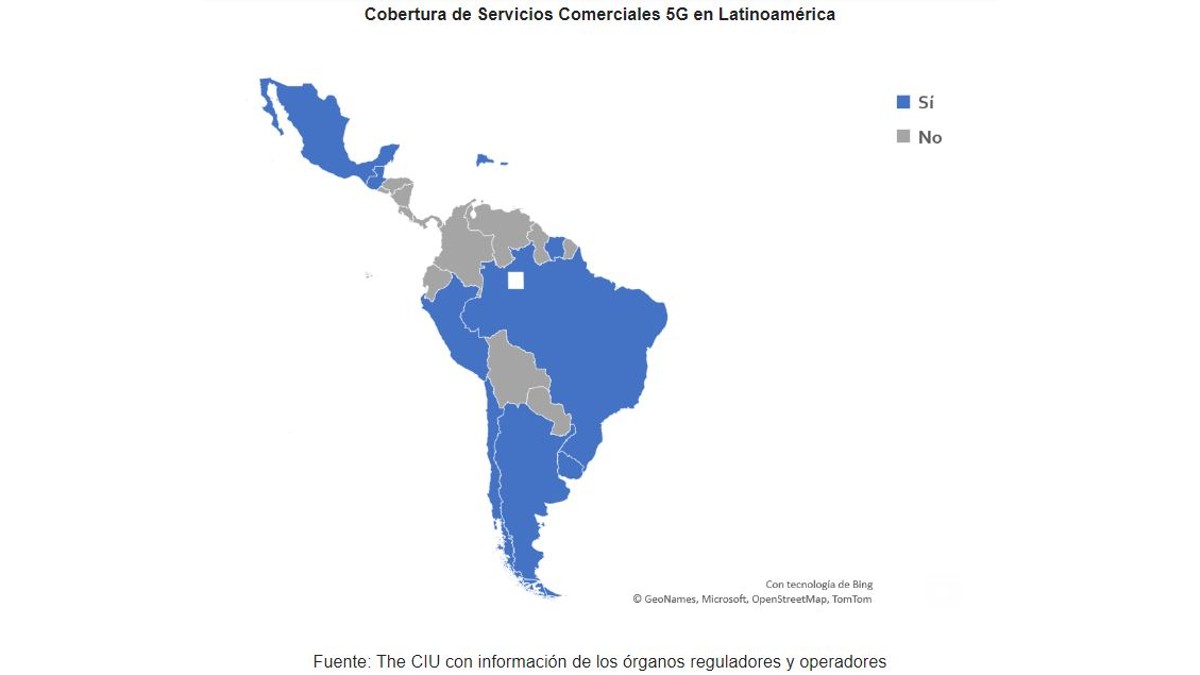 Latin America. The Latin American region reflects a deferred reality with respect to the world leaders in connectivity in terms of coverage and adoption of mobile services, through 5G networks such as South Korea or the United States. The current deployment and availability of this technology exhibits a marked gap between Latin American countries with higher incomes, compared to those economically lagging behind.

The current economic development of each country, the rule of law, regulatory and legal conditions, as well as the levels of competitiveness in the mobile market, are conditions that directly affect the deployment, coverage and adoption of 5G services in the short and medium term.

In the current state of 5G coverage in the Latin American region, chile and Uruguay stand out for their leadership in the deployment of these networks. In the Caribbean, the Dominican Republic and Puerto Rico are the countries with the first commercial deployments in that subregion. Inevitably, the development and levels of economic competition have driven technological advancement in mobile services. Other countries in the region such as Argentina, Brazil, Colombia, Guatemala, Mexico, among others, already register marked efforts to make 5G a reality for the inhabitants and industries of each country.

Current 5G Coverage in LatAm
Of 18 countries analyzed in the Latin American region, only 50% have coverage and commercial availability of 5G mobile services. Brazil, Chile, Mexico, Puerto Rico, Uruguay, Dominican Republic have set the tone for the transition to this technological generation for the rest of the member countries. Some of these cases register a more advanced 5G connectivity ecosystem than in the Brazilian or Mexican case.

This is the reality of Chile since the end of 2021, a territory that ignited its 5G networks through its main mobile operators Movistar, Entel and WOM, a circumstance that consolidated it as the first nation in the region to deploy the fifth generation network nationwide.

The company Entel has reported an advance of 40% in the 5G deployment phase and 200,000 users currently access these networks, this figure is projected to double during 2022 since approximately 400,000 subscribers have devices with these connectivity capabilities.

Uruguay through Antel launched the first 5G commercial network in Latin America in 2019, in La barra de Maldonado area, however, the growth in other areas of the country has not been uniform or territorial in scope as in the case of the Chilean market.

In the Caribbean, the deployments carried out in Puerto Rico and the Dominican Republic stand out, countries that despite being treated to small markets, are in an accelerated process of adoption of 5G networks and equipment. For example, in Puerto Rico, mobile operators are forecast to start shutting down their 2G and 3G networks in the second half of the year. The Dominican Republic transitioned to 5G at the end of last year, since February 2021 it had a public tender of 100 MHz in the 3.5 GHz band, which shows the intention to encourage the deployment of infrastructure in a timely manner.

In Mexico, the deployment of mobile services has reached 40 cities according to América Móvil and is estimated to reach 100 by the end of this year. While AT&T has announced that its commercial offer has coverage in different parts of Mexico City, Guadalajara and Monterrey, and progress in the deployment in other cities of the country that will be announced in 2022.

For its part, Brazil stands out as the country with the largest number of active networks in the region, with 4 5G networks. In addition, Brasilia became in July 2022 the first city in the country with 5G service, a technology that for the moment will be available to some users and that in the coming months is expected to arrive another 26 regional capitals.

Regarding the number of operators that offer these new generation services, the cases of Chile and Puerto Rico stand out, who have a highly competitive mobile ecosystem that favors the dynamism of investments, the timely transition and expeditious adoption of 5G services. In the case of Chile, there are four companies that currently offer these capabilities throughout the country: Claro, Movistar, Entel and WOM. In the case of Puerto Rico, there are three operators that dispute the mobile market of the island very closely, Claro, AT&T and T-Mobile.

It should be noted that in other countries in which the structure of the mobile market continues to be concentrated in favor of a competitor, such as Mexico with Telcel and Colombia with Claro, both subsidiaries of América Móvil, barriers and limited incentives are erected to the massive availability of 5G in the short and medium term.

Countries with the Lowest 5G Advance
In the case of Argentina, Guatemala and Peru, they also have commercial 5G services. However, the coverage for these countries is specifically focused on major cities such as Buenos Aires, Rosario, Mar del Plata, Lima, the Peruvian capital and Guatemala City. In the rest of these territories, these new generation services are not available, unlike the countries analyzed above, in which territorial coverage is in a more developed and extended phase.

In contrast, the countries with the greatest economic lag in the region are those in which the adoption of 5G networks looks more distant and is even expected to begin their transition processes until 2024. In Central America, the cases of Costa Rica, El Salvador, Honduras, Nicaragua and Panama stand out as countries that do not have 5G commercial coverage or services.

In Colombia there are areas with active 5G technology, but they continue to be pilot tests of connectivity and commercial coverage is not yet launched in a massive way. Currently, Claro Colombia is conducting tests in Bogotá, Medellín, Barrancabermeja and Cali, a case similar to that of Ecuador in which 5G connectivity tests were recently carried out in Guayaquil.

On the other hand, South American countries with lower revenues such as Bolivia and Paraguay estimate to implement 5G network technology until 2024 due to the lag in 4G and deficit in fixed broadband infrastructure. Both products both of the scarce economic development of these, as well as derived from the orographic complexity faced by the flow of their sectoral investments.

From the above, it is clear that the deployment in Latin America is on the rise, but it has been disparate between the different regions and markets. Countries such as Chile, the Dominican Republic and Uruguay set the tone for the rapid deployment of 5G networks, registering conditions conducive to this. It also highlights the lower progress in coverage and commercial offer in several countries such as Argentina, Guatemala and Peru.

Also, it is identified that the economic lag and the lack of competition in the mobile market are conditions that inhibit a timely and extensive deployment of 5G networks. Circumstances that take place in the cases of Central America, Bolivia or Paraguay. Regarding the positive influence of competitive dynamism in the mobile market, Chile and Puerto Rico are flagship examples, in contrast to the conditions found in Colombia and Mexico.

Finally, it is crucial to promote the deployment and adoption of 5G, as well as the collaboration and strategic action of operators, regulator, government and end user, in order to create an ecosystem that allows to shorten the digital divide and revolutionize the productive chain, guaranteeing access to connectivity to the majority of the population.

No thoughts on “CIU Analysis: Status of 5G coverage in Latam”