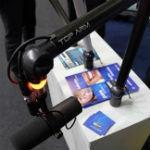 Colombia. Biquad is a company that has been operating for 15 years in the professional broadcasting and audio market, developing solutions for radio and television stations. During TecnoTelevisión&Radio, which will be held between November 9 and 12 in Bogotá, it will present its latest news.

Always thinking about the evolution of broadcasting, Biquad presents its version of RDB/RBDS encoder for the world market. RDS stands for "Radio Data System": a system for the digital transmission of information in text format, using a quota of the conventional FM channel. Named after Acadia, the equipment was developed with the most advanced technology currently available and possesses exclusive resources and features not found in any other model on the market.

Another of the novelties of this year is the articulated support of  TopArm microphone. The equipment has internal springs, modern design, embedded ON-AIR indicator light and unique finish. Available in three different colors and two different fastening systems (future releases of new fastening options), the equipment was built with exclusive aluminum profiles and soft, quiet joints. It supports microphones with more than 2 Kg and has models with total length of the bars 80 and 100cm.

No thoughts on “Biquad Tecnología will launch in TecnoTelevisión&Radio”