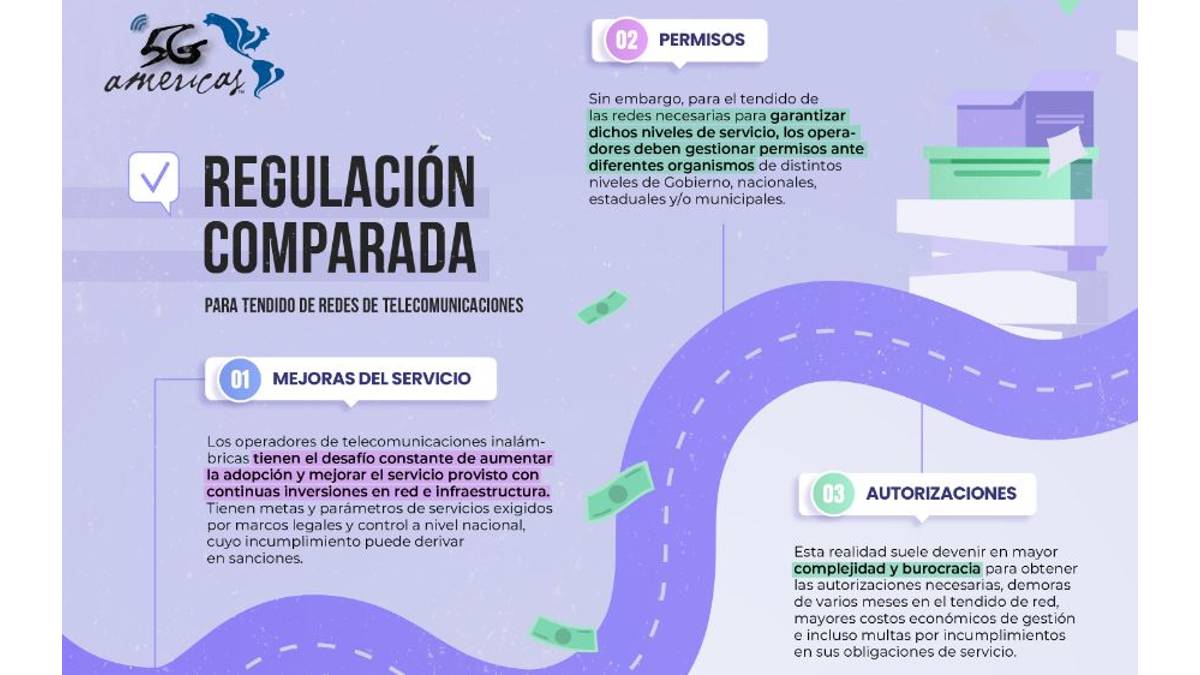 Latin America. Telecommunications operators in Latin America and the Caribbean face a complex regulatory context when it comes to deploying the necessary infrastructure to maintain the operation of their services, according to an infographic prepared by 5G Americas.

For the location of their networks, companies in the sector must obtain permits and authorizations from various entities and agencies at different levels of government, even at the municipal level in which there is significant fragmentation and heterogeneity in terms of requirements, deadlines and process mechanisms. All of the above results in delays and increases in the cost of the works necessary to expand and maintain the quality of the services provided by the operators.

"The complexity and regulatory heterogeneity that has existed for years for the deployment of telecommunications infrastructure becomes more worrisome, if we consider that the technological evolution and advance of 4G, and the imminent takeoff of 5G in the region will require enormous efforts and investments by telecommunications operators. It is necessary to continue reviewing and reducing obstacles to avoid the region's lag in access to the latest technologies," said José Otero, Vice President for Latin America and the Caribbean of 5G Americas.

In addition to the impact on the service provided to the population, this bureaucracy and fragmentation increases costs and can even lead to sanctions from government authorities for non-compliance with the obligations established in their service concessions, making the operation even more expensive.

This situation is particularly critical considering that with the evolution of 4G and 5G, between 2 and 3 times more than the macrocell sites that existed in operation by 2018 will be needed by 2030, according to figures collected in the report "Telecommunications Infrastructure: Comparative Regulation in Latin America and the Caribbean", Published August 2022. But in addition, the deployment of small cells will also be needed, which could exceed 5 million units deployed worldwide by 2025, according to figures published in a document published by 5G Americas and the Small Cell Forum (SCF) in 2018.

Some governments in the region have taken the dimension of this problem and its impact on telecommunications services, and have directed efforts to try to reduce complexity and/or establish uniform criteria to reduce these obstacles.

Some examples of this are the so-called "Antenna Law" or "Tower Law" in Brazil, Chile and Peru; or models and recommendations for municipalities, such as the Model Ordinance of Argentina, or the standard regulation that the Planning Office of the Metropolitan Area of San Salvador (OPAMSS) developed to homogenize municipal requirements in El Salvador, among other examples.

In Mexico, for example, the Federal Telecommunications and Broadcasting Law (LFTR), published in 2014, establishes the prohibition of imposing additional economic considerations to those agreed with the owners of real estate for the installation of infrastructures, and specialized courts were granted jurisdiction to settle conflicts between concessionaires and the federation, the states and municipalities.

These cases and others, analyzed in the report "Telecommunications Infrastructure: Comparative Regulation in Latin America and the Caribbean" show that the problem is recognized not only by the industry, but also by regulators, governments and other actors in the sector.

No thoughts on “Network laying is hampered by heterogeneous regulation”