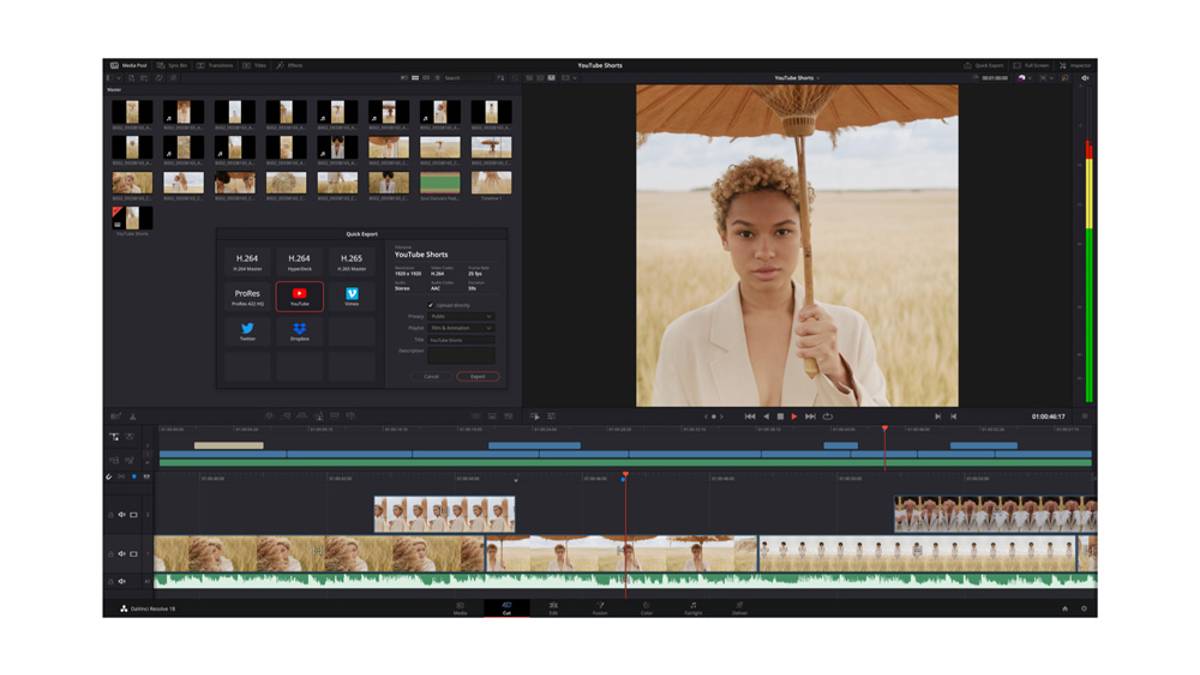 Latin America. With an important update that allows you to select vertical resolutions when editing content for social networks such as TikTok, Instagram or Snapchat, and block timelines in trays when collaborating with other users, Blackmagic Design presented its new version of DaVinci Resolve, 18.1.

This new version also provides a dialogue leveler by artificial intelligence activated by the DaVinci neural engine in the Assembly, Editing and Fairlight modules. The latter also offers vector keyframes to edit using automation curves, as well as a grid that provides the possibility of placing clips on it according to the time code or the musical compass. On the other hand, DaVinci Resolve 18.1 makes it easy to edit projects imported from ATEM Mini ISO mixers by adding audio to images.

DaVinci Resolve 18.1 makes producing, exporting and publishing content quickly and easily on Instagram, TikTok, Snapchat and Facebook. It is now possible to select square or vertical resolutions directly from the project settings window, for example, 1080 x 1920, which makes it easier to prepare the timeline when creating content for social networks. Collaboration is also made even easier by a new feature that automatically locks the timeline selected by a user, but not the tray that contains it. This allows multiple editors to work simultaneously with other files in that tray.

As for audio, DaVinci Resolve Studio 18.1 includes a new voice isolation effect using artificial intelligence that allows you to suppress unwanted loud noises in voice recordings. By incorporating this effect activated by the DaVinci neural engine in the Assembly, Editing and Fairlight modules, it is possible to isolate the dialogue in a recording in order to eliminate the sound of an airplane or even an explosion, for example, in order to hear the voice more clearly. This feature is ideal when conducting interviews or recordings in noisy locations.

On the other hand, the dialog leveling effect in the inspector processes recorded dialogs and levels volume without the need for tedious adjustments to clip gain or automation curves. Controls include a real-time offset waveform graph, focus presets, and three processing options for easy natural sound. Thanks to the new vector keyframes in Fairlight's automation curves, they can now be graphically modified with conventional tools. In addition, an innovative display mode is provided when making changes to automations, which allows you to organize curves and keyframes more quickly and easily, as well as a grid that offers the possibility of placing clips on it according to the time code or the musical compass.

On the other hand, this update allows you to edit faster and more smoothly by improving the import of projects from ATEM Mini mixers, since the audio is automatically coupled to the images, thus optimizing the work dynamics. In addition, the Edit module now includes the features of the DaVinci Resolve Speed Editor keyboard, such as changing planes, audio level, and clipping of In and Out points. It is even possible to use these options in conjunction with the rotary knob to further streamline processing. This update also allows you to create presets for subtitles and formatting guidelines specific to a track. This provides the ability to modify individual settings for each subtitle, including style and font, while preserving the font size and background of the remaining subtitles in the track.

In the Fusion module, it is now possible to speed up work dynamics thanks to greater compatibility with the "Magic Mask" function. It uses DaVinci's neural engine to detect people, animals, vehicles and objects in a shot and track their movements. Consequently, you can create tracking masks directly in this module, in order to add effects to characters or stylize the background. In addition, it provides the possibility to search for common keywords and categories for more than 200 tools. With this smart search functionality, it is possible to filter the list without knowing exactly the name of a tool, in order to quickly find it and apply it to visual effects.

DaVinci Resolve 18.1 allows cinematic clipping in Dolby Vision 5.1.0 to modify the brightness level of high dynamic range images and optimize them for film and television. In turn, it is possible to incrementally adjust the size of the program's interface in order to adapt its resolution to screens and monitors on Windows and Linux systems, thus facilitating the visualization of fonts in the different menus and options.

This version also significantly improves the operation of various tools. In this sense, by optimizing internal processing, greater speed is achieved in the Text+ function (10x), as well as in the stabilization, monitoring and analysis of facial retouching (5x), and in the reduction of spatial noise (4x). In addition, the playback of clips with complex nodal structures and the decoding of Blackmagic RAW clips on computers with Apple Silicon processors has been streamlined.

This version can now be downloaded for free from the Blackmagic Design website.