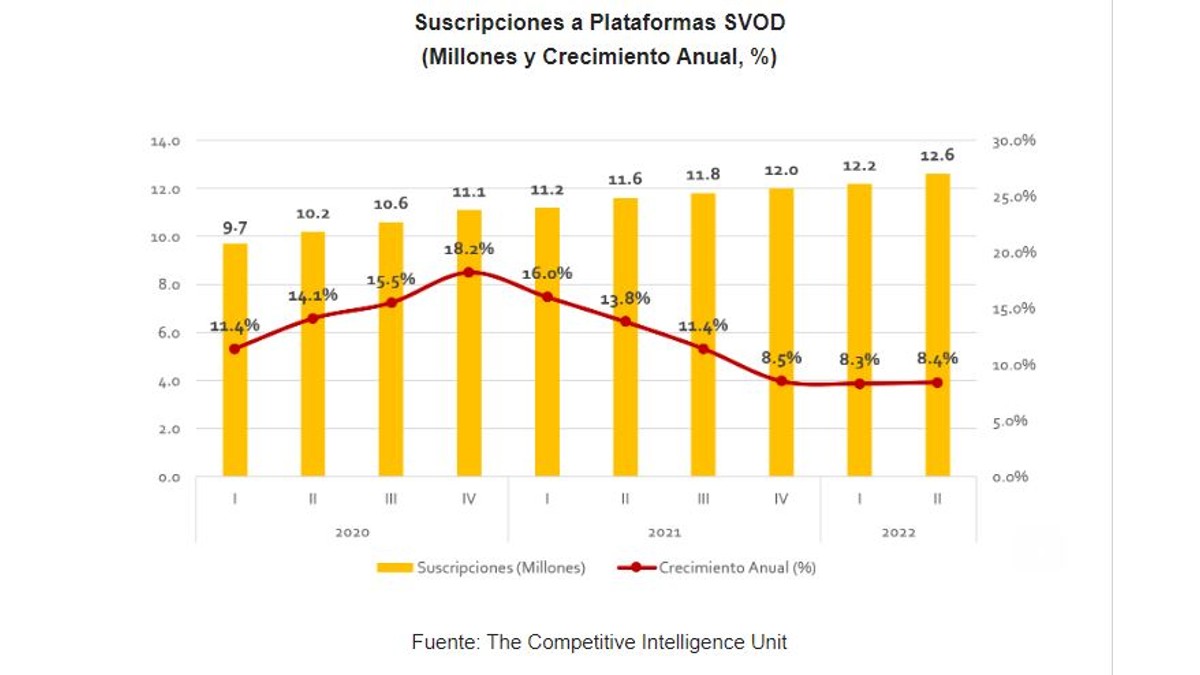 Mexico. The subscription video on demand (SVOD) market is showing signs of approaching its structural ceiling in several territories around the world. This, based on the growing competition, the diversification of alternatives for access to audiovisual content, adverse macroeconomic conditions and structural barriers that persist in countries (coverage and affordability of connectivity, availability of means of payment, etc.), among other factors.

This is evidenced by the figures reported by the main player in the market, Netflix, who since the first half of the year announced a loss of subscribers in its global aggregate and a decrease in its dynamism in different regions in which it is available.

For example, in the United States and Canada it registers an annual contraction of 0.9% in its customer base to reach 73.4 million during the third quarter of 2022 (Q3-2022), while in Latin America its growth has slowed at a rate of 2.4%, reaching 36.9 million subscriptions in the period.

In Mexico, figures from The Competitive Intelligence Unit (The CIU) indicate a cut in the annual growth rate of the SVOD market to a level of 8.4% during the second quarter of 2022 (Q2-2022), less than half of the maximum reached (18.2%) in the last quarter of 2020, to reach a total of 12.6 million subscriptions.

The accelerated inflation, the imminent economic recession in Mexico and in much of the world, as well as the low socioeconomic level of the bulk of the population has reduced the dynamism, attraction and attraction of new users in this market. Also, a growing phenomenon faced by competitors is account sharing that limits the growth prospects of the subscription base. 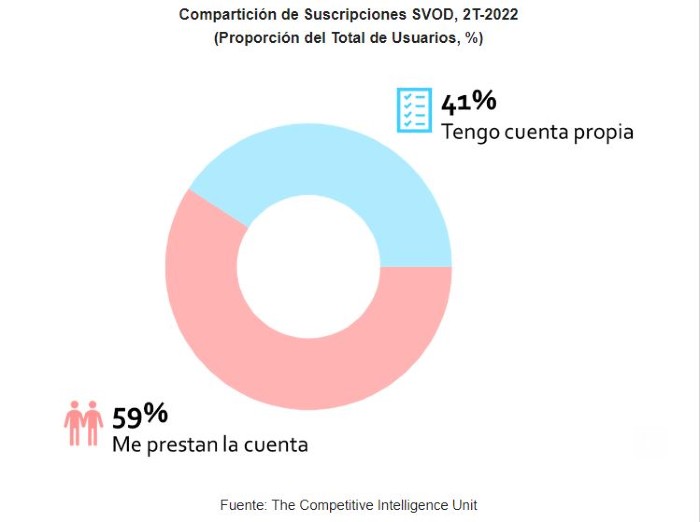 Contracting SVOD Platforms: Own Accounts and Payment Methods
As of Q2-2022, 6 out of 10 users of SVOD platforms report that their account is shared, while the remaining 41% hold the ownership of the subscription. Although the ratio of who has 3 or more accounts has increased (27% of the total), the ratio of users who share their account has increased, due to the desire to have more than one platform, but they face budgetary restrictions for that purpose.
In other words, the arrival of new competitors in recent years has boosted the hiring of more than one SVOD offer, but it has also triggered account sharing in Mexico.

Precisely, one of the structural barriers faced by users in this market is the availability of payment methods to contract these platforms, since the main accepted method is billing to credit / debit cards (70.6% of total users pay with these). While the remaining proportion (29.4%), makes your payment through intermediaries, charge to receipt of services, prepaid cards, among others.

Account Growth Prospective
Despite the circumstances described, 9% of Internet users who do not use SVOD platforms want to hire at least one in the next six months, which still leaves room for growth for the adoption of these alternatives for access to audiovisual content.

Among these, only 30% of users would make the payment of their subscription via credit / debit card. Although the SVOD model is native to bank cards, the structural conditions of the Mexican market have led them to incorporate other payment methods, such as prepaid cards and cash payments in stores.

There is a desire to have an SVOD subscription, however, to boost their hiring the platforms must have the channels accessible to the user and thus also increase their market footprint in the country.

Given the arrival of a structural ceiling for the contracting of SVOD platforms, competing players must choose to improve accessibility conditions for current and potential users, considering the optimal pricing and segmentation of plans for different population groups and socioeconomic levels, as well as offering the payment alternatives available to users.

These are essential links to deal with the slowdown and even contraction that is registered in the contracting of SVOD platforms in Mexico and around the world.

No thoughts on “SVOD Platform Contracting Habits in Mexico”