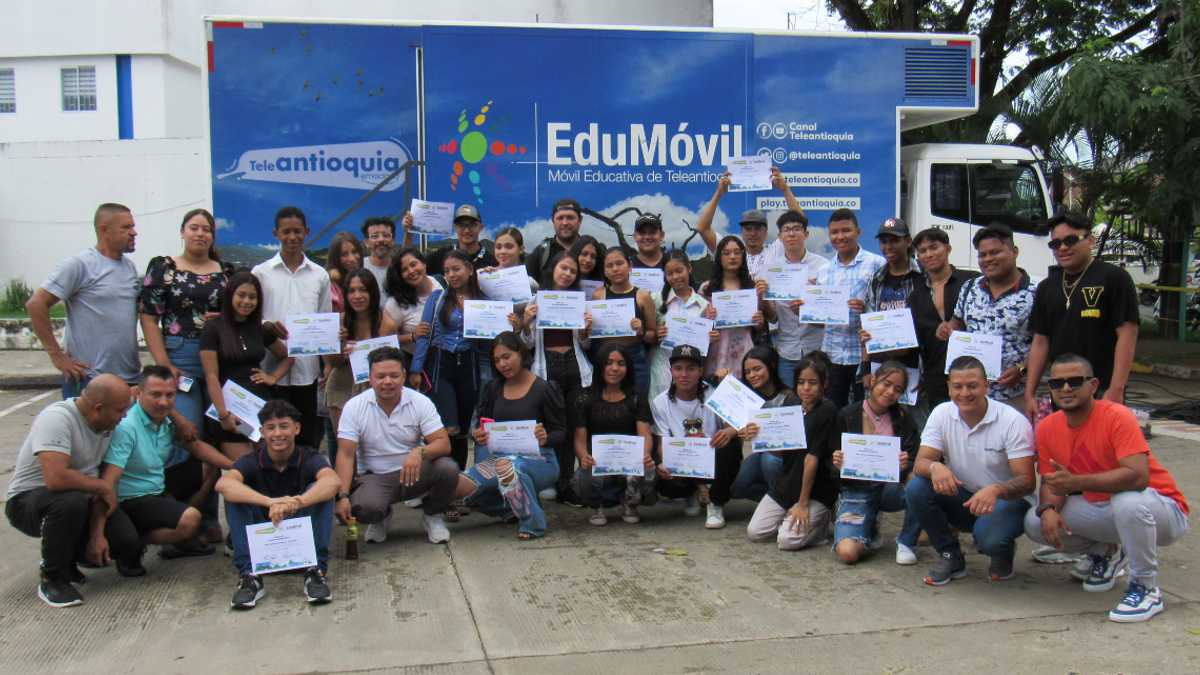 TVyVideo was able to know first-hand the EduMóvil project of Teleantioquia in the municipality of Caucasia. Undoubtedly, it is a great experience to bring audiovisual technology and the public to the regions.

And that is just what the Colombian regional channel Teleantioquia is doing with its EduMóvil project, a mobile unit equipped with technology for television production that visits municipalities and for a week Canal staff provides practical training on how to make television.

This project arose in 2013 at the idea of Pilar Gómez, production director of Teleantioquia. He recalled that, at that time, being a public and regional Channel, they were looking for ways to strengthen their presence and reach the regions of Antioquia with the idea of the public. After analyzing several ideas, they opted for the EduMóvil.

"The unit was designed with people with expertise in mobile units of educational focus and from the ICT Ministry and the Government of Antioquia approved the resources. The mobile unit meets the 2 characteristics of educating and serving for a transmission. And teleantioquia staff do knowledge transfer," he said.

Between 2014 and 2015, this itinerant audiovisual production center toured 17 municipalities, training more than 550 young people with the help of the Ministry of Youth of the Interior and the Protective Environments project, which served young people at risk.

During the following four years, between 2016 and 2019, the EduMóvil project was suspended by decision of the current governor. In 2020 it was resumed and a technological update was made to visit the regions again. 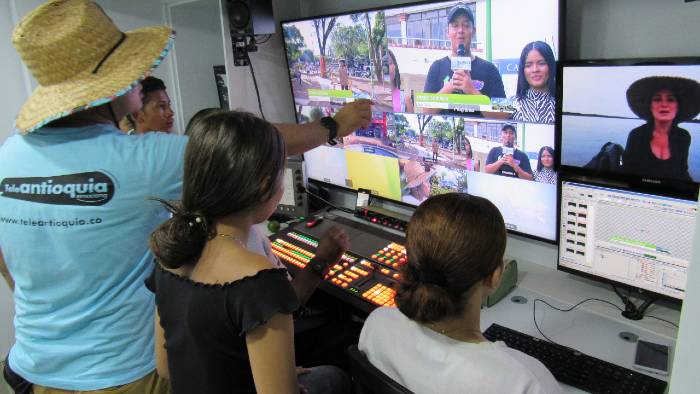 Itinerant technology
There are five lines of training that EduMóvil participants receive for a week: editing, genres and television formats, cameras, transmission systems and audiovisual sound, because in addition to sound for cameras and transmissions, they also make a podcast and learn from radio content.

To achieve this goal, the EduMóvil has the latest in broadcast technology, which was renewed by 95% in 2020. Cristian Alzate, Master Engineer of Teleantioquia and engineer of the EduMóvil, said that the mobile unit is divided into 7 areas that include VTR with triplay of 4 inputs 2 video outputs, XDCAM machine to record in high quality; sound with a Yamaha TF1 console of 16 channels and 16 digital channels of high performance for effects, playback.

In addition, for production it has a video switcher of 32 inputs, 6 outputs, graphics, four chains of Sony cameras by triaxial with its RCP, CCU, color viewfinders. They also have two cameras for P2 250 recordings and LED lights. And inside, it has a studio in chroma, to make any type of virtual set.

"Allowing those involved in the training to use the equipment is very nice and it's a lot of responsibility. Tell them how a team should be operated, that everything is taken care of as if it were theirs. The beauty of this project is to give them the opportunity to manipulate the equipment that is currently used to make audiovisual production, give them the confidence, to dare. In operation we have only had equipment deconfiguration and that is where our knowledge comes in," said Cristian Alzate. 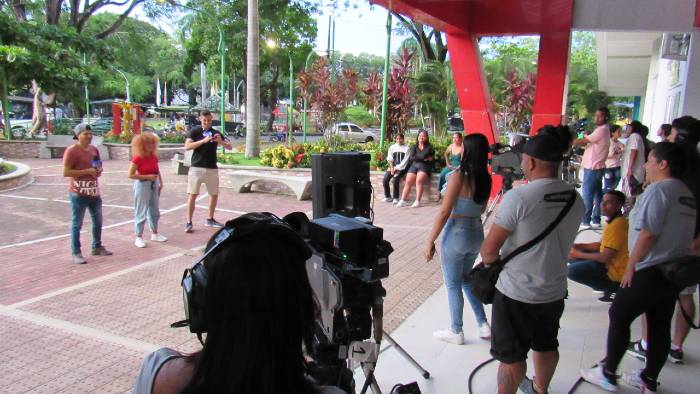 Arousing interest in the audiovisual
The call to participate in the EduMóvil trainings is made by the municipal administrations and is open. In its journey, it has had a very varied audience, and although they are mostly young, there are participants up to 63 years old. Andreina Saray Zúñiga, director of the program, mentioned that people arrive who had nothing to do that week or knowledge in the audiovisual, others who have an interest in the audiovisual or generate some type of content and want to continue learning and even local media.

"Something very nice is that the participants make content not only as they see it from afar but as they live it, which is completely different from how we, who are in the capital, could create content from the perspective of the territory. Being able to know the true meaning of the territory from young people who inhabit it in many ways, is the best work that EduMóvil has to tell. She has been a witness of sad stories, happy stories, young people who had no purpose in their lives and today they are audiovisual filmmakers and they live from that," he said.

The methodology used for the training is under the carousel technique. The participants are divided into groups and the classes are rotated. As part of the process, every day they must do a multi-camera exercise that is broadcast pre-recorded by Teleantioquia signal 2 and with live outputs in the channel's own programs. They are in charge of the production and of presenting each of the outputs.

Esteban Agudelo, producer of the EduMóvil, stressed that it was not so complex to change the chip from making everything perfect and with little time as television is done professionally, to "play to do production" in the EduMóvil. And although they know that there are licenses and they can be wrong, because they understand that those who are doing it are apprentices, they seek to get the best out of it.

"From the beginning, in the multi-camera exercises that start on the first day, we seek to do things well, taking into account the capabilities of the participants. In a few hours they are summarized what we have taken 8 and 10 years learning. But the task is to leave them the interest in production. With one per town that remains with the thorn, the task has already been done," he said.

At the end of the week, participants must submit a professional note, a podcast, a digital product and a photo gallery. All works can be viewed in https://edumovil.teleantioquia.co/ 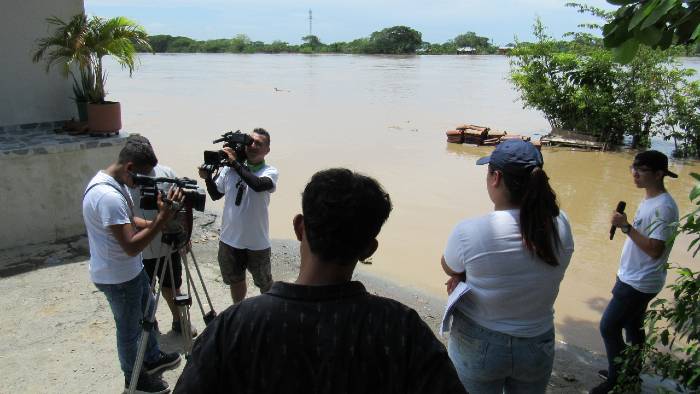 A life experience
There are many experiences that EduMóvil has added throughout these years of training. Esteban Agudelo recalled that in a corregimiento of Cisneros, a group of young people who have a Youtube channel, called Channel 8, had been donated equipment but did not know how to handle it. The Teleantioquia engineer installed them and taught them. Today they are making productions for their channel.

Another group from Cáceres is making a film. In El Bagre, a group of young people from a corporation was part of the EduMóvil because they wanted to learn how to produce and today they are making content to avoid child labor and are planning to set up a channel. In Andes, a 63-year-old woman participated and thanks to the fact that she was recognized, today she is working as a producer in the local channel.

But it's not just EduMóvil participants who have had an impact on their lives. The 11 people of the Teleantioquia team that accompany the training week, director, producer, editor, cameraman who does the behind the scenes, engineer, sound engineer, who covers social networks, director of Dale Play and the drivers of the EduMóvil and the van that accompanies them, have lived intensely this experience.

Not only for the extensive days of more than 12 hours each day, but also for the connection they achieve with the participants, whom they teach and guide with the patience that is little seen in a television studio and that ends until tears at the end of the week.

The producer of the EduMóvil recalled that "For a television production that rains is a catastrophe, because everything has to be stopped. But in two municipalities we visited people were happy when it rained, because the swamp grows and they have more abundance of fish. For them the water is a party and they go out to dance in the downpour. Living these cultures teaches other realities." 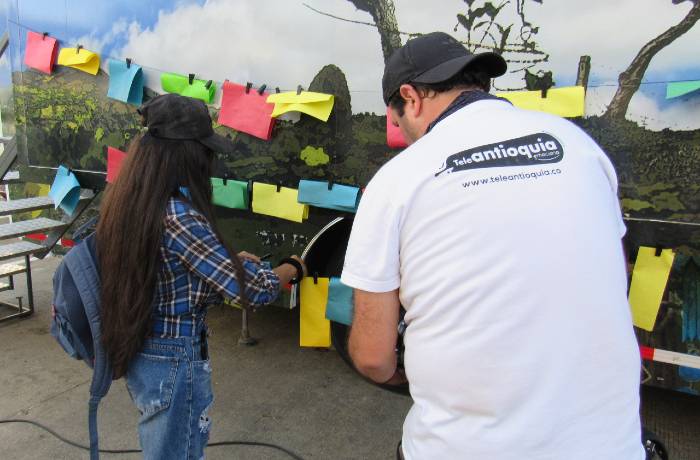 For his part, Cristian Alzate indicated that "I did not know that I had that gift of patience, of teaching. And we learn much more from them. From a personal point of view, it has been a very beautiful experience, to know the customs. In each municipality, friends and audiovisual projects remain."

And it is that even Edson Cortés, driver of the Edumóvil, speaks with emotion of the project. He is the only person who has been on every trip since he started in 2014 and has had the responsibility of taking the truck for long journeys, roads in poor condition and taking care of the participants like a dad, as he himself says, throughout the week.

Many participants of the Edumóvil are still in contact with the trainers, they even visit Teleantioquia when they are in Medellín and in the Canal, even if they do not know them, they know that they were part of the project and they receive them very well.

A long-term project
Now, said Pilar Gómez, they are looking to separate from the administrations to achieve the continuity of the project in the future, to be able to bring the magic of television to other municipalities outside Antioquia and to continue complying with the slogan of the Channel: Teleantioquia emociona.

No thoughts on “Making TV from the regions”