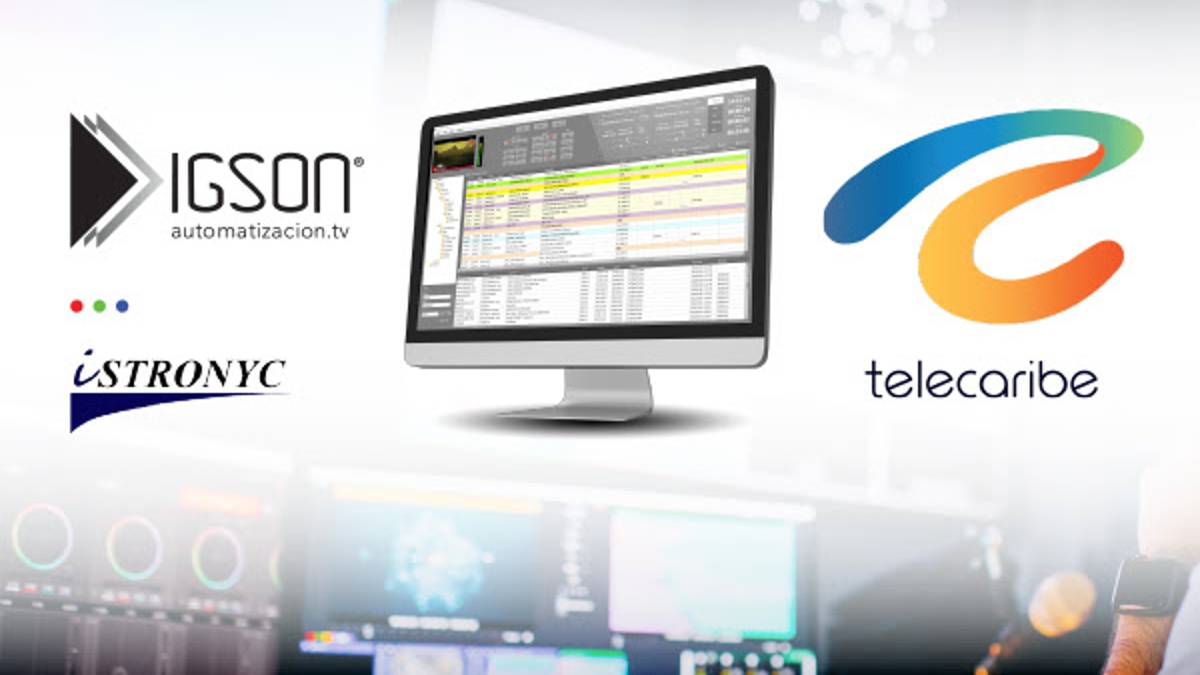 Colombia. Telecaribe is the public television channel of the Colombian Caribbean region, founded in 1986. To improve the quality of its signal, the channel has integrated several MAM, ingest and streaming solutions from Igson.

In the realization of the project, Igson solutions have been integrated according to the needs of Telecaribe thanks to the support of Istronyc, a company of great recognition in the Colombian audiovisual medium and Igson's partner in Colombia.

With this project, the channel has implemented the igson Play Now Plus solutions as the main master, Igson MAM for the cataloguing and scheduling of the material that will be broadcast on air, Igson Capture to have all the recordings in high definition and immediately available and Igson Graphics for the titling of the main program.

The complete solution implemented in Telecaribe includes two HD channels, one automated and one for the previous one. Automation is done through playlists with automated opening, in which they can add multimedia events in different formats: MPEG-2, MPEG-4, H264, MXF, GXF, MOV, AVI, WMV, VOP, XDCAM, AVID DNxHD, etc., in addition to live inputs (LiveSource) and streams (HLS, SRT, UDP, RTMP).

The successful Channel-in-a-box Igson PlayNow features Up-conversion (SD to HD) and Down-conversion (HD to SD) files on the fly, as well as Timed Events scheduling options. It also has automation of graphic events, transmission reports, audio normalization and simultaneous broadcast by SDI /IP / NDI of the main channel.

It has a powerful tool for editing your video events, for example, trimming or creation of subclips (virtual segmentation), control of audio levels; in addition to having an internal scheduler to create playlists as many days in advance as necessary, as well as for their review before being scheduled for broadcast.

The graphics generator included in Igson PlayNow Plus allows Telecaribe to create graphic events for its programming: logos, animated logos, video graphics, ribbons, clocks, tickers, real-time weather status for one or more locations, stopwatches, texts and hashtags, etc. There are 30 buttons to load and view the different graphics of the channel, giving your programs a renewed look and all this in an easy and intuitive way.

Regarding the management of multimedia material of the channel, the Igson MAM solution was successfully implemented for the creation of playlists, management and cataloging of multimedia material -either locally or from an external storage (NAS or SAN)-, control of recordings from Igson Capture in the production and / or master area, as well as cataloging and editing of the same for immediate and / or subsequent use.

Finally, for the master it was essential to have an ingest automation software to be able to capture several sources that have to be recorded either from the studio, satellite signal or even the signal of the program itself. Igson Capture fulfills that need in detail by offering a fully automated recording list by dates and times. This software allows Telecaribe to record and monitor up to 4 signals per baseband, record SIGNALS over IP (HLS, SRT, RTMP, UDP) and also control the routing switcher to link with the desired signal 15 seconds before the recording begins. In addition, it supports the most common codecs like H264, H265, MPEG-2, MPEG-4, XDCAM, etc.

Telecaribe will be able to make Internet transmissions through RTMP streaming directly from its master since Igson PlayNow has the option of generating an IP signal simultaneously to its output by baseband.

No thoughts on “Telecaribe strengthens MAM, intake and streaming with Igson”