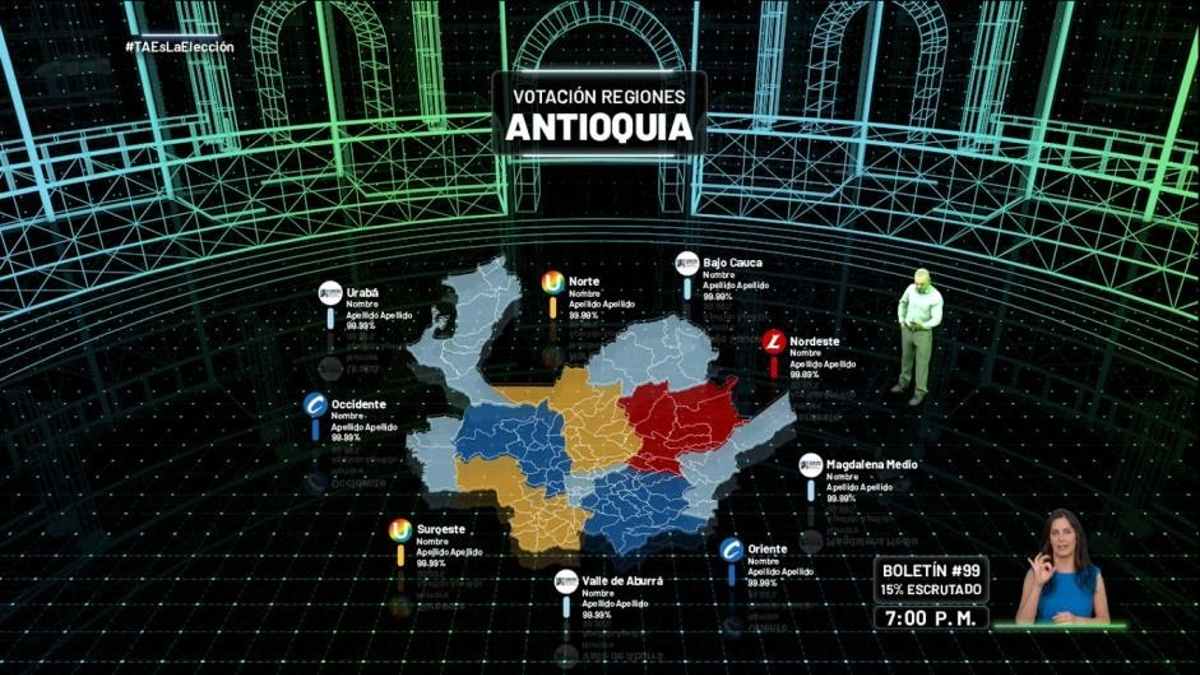 Colombia. Between March and June 2022, Colombia experienced three electoral days. The first to elect the new congress, the second for the first presidential round and the third to elect president. This meant a major challenge for the media and their transmission of the results.

The public channel Teleantioquia, the first regional channel of open signal in Colombia, was prepared for six months for the transmission of these days. "Teleantioquia es la elección" is a live production television project, with a duration of 12 hours of continuous transmission for the coverage of these elections.

The start of the project was made 6 months before the date of its execution, for its process it was planned in two stages:
Stage 1. Conceptual Design: In order for the teleantioquia audience to observe in a more dynamic and entertaining way the electoral process in Colombia, the channel decided to make a production with elements that associate a futuristic, high-tech language generated through a virtual environment, with holograms, simple shapes and fine details type HUD (Heads-up display).

Stage 2. Execution: The set of "Teleantioquia Noticias", newscast of the Regional Channel, was selected, to expand it virtually it was decided to execute a digital montage, to create two environments; one for the analysis of the day with talents and specialists and the other environment for the management of the results and electoral trends, that is, the real set was merged with the virtual one, including virtual LED screens. For its design and construction the graphic area used the 4D Cinema program and later the adaptation of that design to Photoshop was made, adding the necessary video layers and masks, to then take it to the Newtek VSE, thus making the final adjustments to have a set with the best features and join it with in the graphic montage. 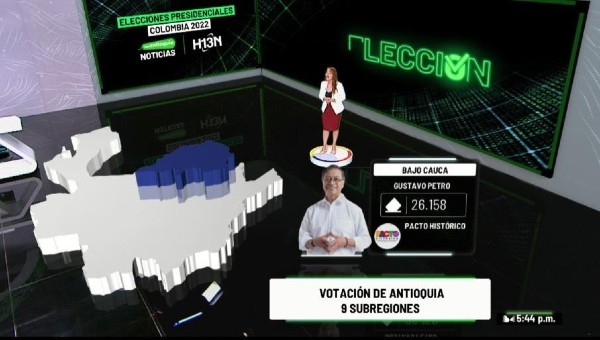 Section of the virtual set: In the transmissions it was used to carry out the analysis and presentation of electoral results taking advantage of the possibility of augmented reality that the Tricaster 2 Elite has, the C.G. graphic unit used for all the visual pieces of the project. "Teleantioquia is the Choice" was Ross's Xpressure, integrated with the Tricaster with the Newtek NDI protocol.

In turn, other tools were used that allow us the Tricaster 2 Elite to facilitate production, for this some functions programmed through macros were used; creating a total of 44, executed for broadcast on the air through an intelligent panel (Live Panel) which allowed them to have a production dynamic with a fairly fast response capacity.

Lighting
As for the lighting, they used LED light, creating a scheme of diffused light sources, in order not to generate pronounced shadows and thus create a flat, even and balanced atmosphere, to achieve this it was adapted in an area of the studio with a green screen, using in the assembly of the scenes some masks that covered the monitors located near the talent when mentioning the electoral results issued by the Registrar National of Colombia.

Camera and personnel assembly
An assembly of 8 cameras was carried out in Sony HX100 studio, and several remote sources in the newsworthy sites with different Live U and Aviwest transmission systems, located in the cities of: Medellín, Bogotá, Bucaramanga and in the subregions of the department of Antioquia where 10 SRT signals were used through the APP, Larix Broadcaster for mobile devices, thus completing 16 external live signals.

With the 8 M/E that the Tricaster 2 Elite has, they managed to meet the technical and production needs for the project, in such a way that they used the M/E 1,2,3 and 4 for everything that had to do with the external signals and relate them to the talents on set, both on the main screen and in the Video Wall of studio 2 of the channel, In addition to the virtual LED display, for the M/E 5,6,7 and 8 were intended for virtual scenes. 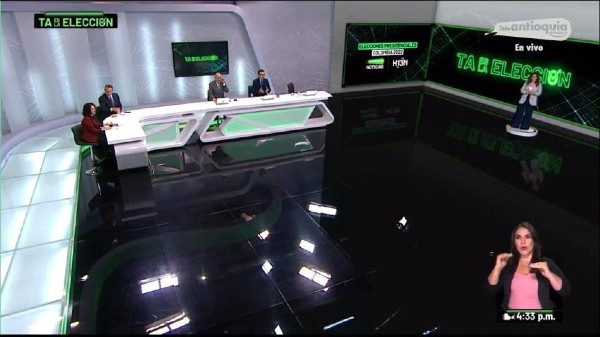 No thoughts on “Teleantioquia integrated systems for election transmission”