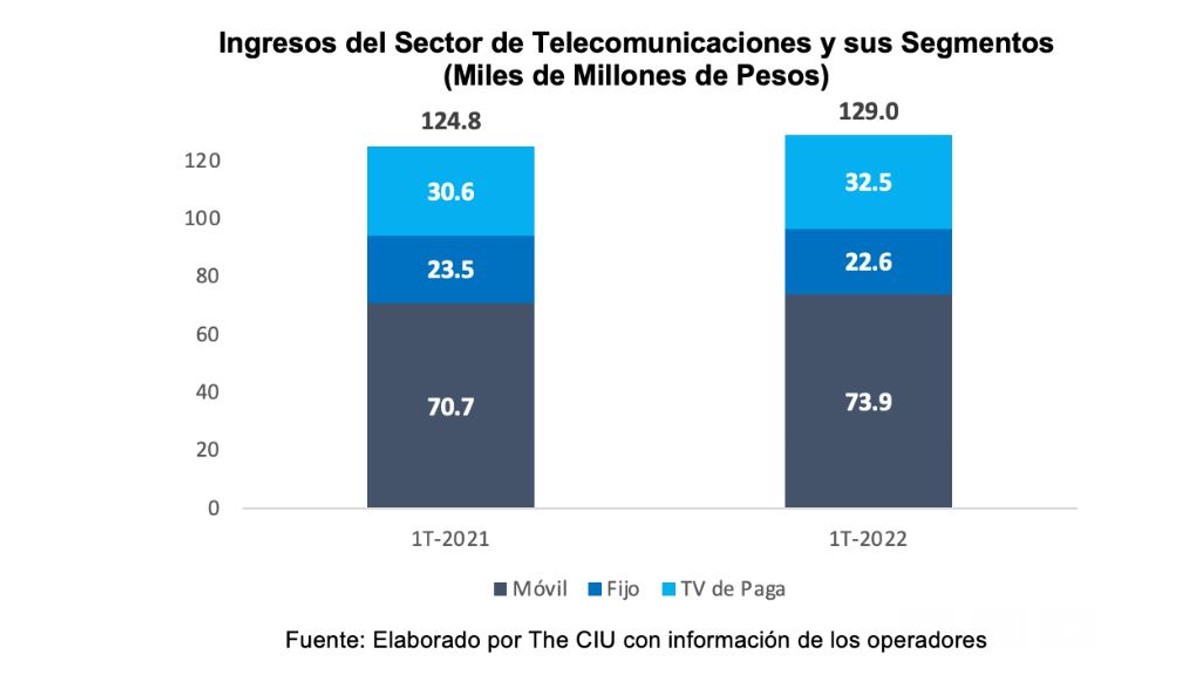 Mexico. In a virtual meeting of the members of the Institute of Telecommunications Law, IDET, and The Competitive Intelligence Unit, The CIU, presented relevant figures of the telecommunications sector in Mexico for the first quarter of 2022 (Q1-2022), in which a partial recovery of the usual dynamism of this sector prior to the pandemic crisis is manifested.

Measured by operators' revenue generation, telecommunications grew at a rate of 3.4%, a level that is close to those registered before the pandemic, while the Gross Domestic Product (GDP) only increased 1.6% during Q1-2022. In other words, the sector grew 2.1 times more than the national productive apparatus.

In round numbers, the provision of telecommunications services resulted in an accounting of $129 billion pesos (mmp). The mobile market increased its revenue capture by 4.4%, amounting to $73.9 mmp, a weighting of 57.3% of the total sector, explained by the upward consumption of services, leaving behind the stagnation and fall registered in the previous two years.

Likewise, the pay-TV and triple play services segment generated revenues of $32.5 mmp, a figure that weighs 25.2% of the accumulated sector, registering an annual growth of 6.2% during Q1-2022. This upward trajectory is attributable to the growing preference for the supply of packaging that generates greater added value for Mexican consumers.

On the other hand, the only market with red numbers was that of fixed telecommunications, despite the expansion in the contracting and use of fixed broadband in homes and companies in the country, derived from its prolonged downward tariff adjustment and the replacement of fixed telephony by mobile services. The segment recorded a revenue figure of $22.6 mmp (17.5% of the sector's total), equivalent to a 3.6% drop in its annual comparison.

On the other hand, it is relevant that, with figures as of April 2022 published by INEGI, the trajectory of the prices of the telecommunications sector shows a downward trend in its growth rate, in contrast to the accelerated upward evolution registered by the generalized prices of the economy as a whole, measured through the National Consumer Price Index (INPC).

Thus, in the first four months of the year (January-April 2022), the accumulated inflation of the national economy amounted to 9.2%, while triple play packaged services registered a decrease of 23.0% in their price levels during the aforementioned period, from the substantial increase in internet speeds in the different packages offered whose prices remained practically at their same levels.

Thus, based on the indicators and dynamics referred to, IDET identifies that the telecommunications sector in Mexico is on track to recover and even exceed the growth rate registered prior to the pandemic. This as a result of the growing contracting and consumption of services for individuals, households and companies in the country. It is noteworthy that this dynamism will not be accompanied by an increase in prices, unlike those observed in various goods and services of the economy.

No thoughts on “Telecommunications sector begins to recover dynamism”