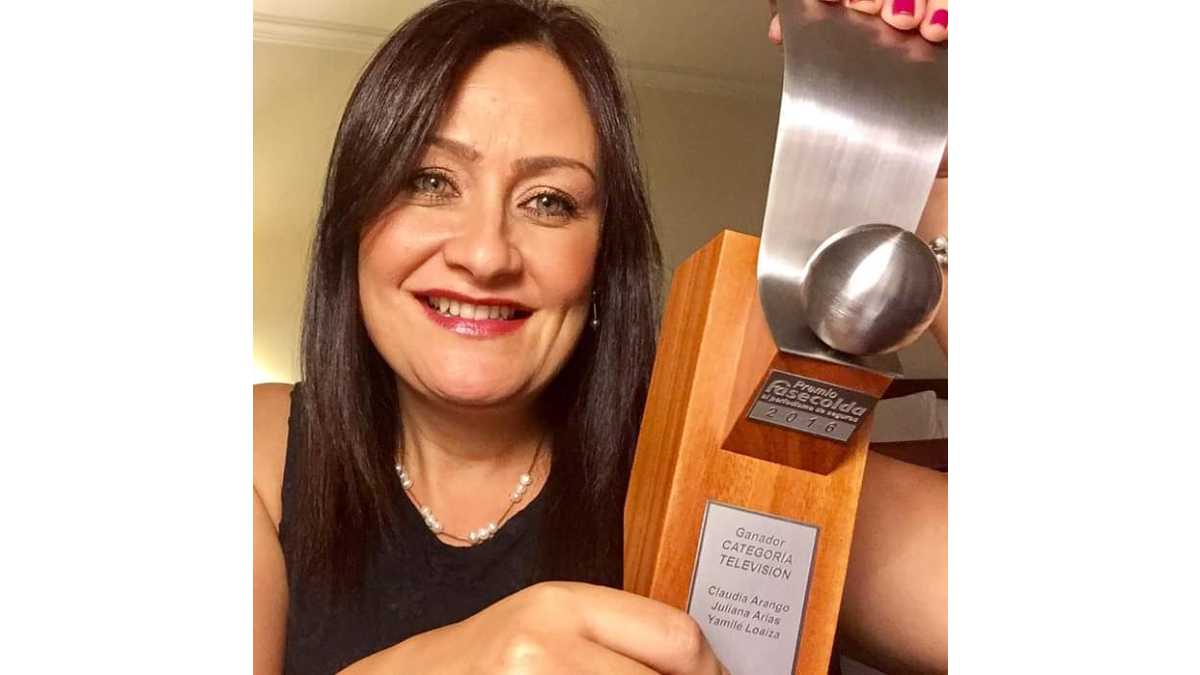 Our training as journalists should focus on moving the guts and "uncomfortable" the audience; that's when the real function of understanding what's happening is being performed. Fear must be felt, and for me it must be felt and then overcome.

This installment presents the interview with the journalist Claudia Arango with whom she investigates the methodology she has for journalistic research for audiovisual media, based on her vast experience and her ability to understand the protagonists of their stories, human beings who can be affected if the appropriate way to tell their stories is not found.

Arango has been a director, producer, presenter, assistant director and director, in various audiovisual spaces such as Infrared (Teleantioquia channel) and the investigative program Periodísticos Telemedellín (Telemedellín channel).

What has been your career in the field of investigative journalism in Colombia?
Claudia Arango: It has been a very nice trajectory because I have been growing in what I like, which is to tell stories for television as a means to get public opinion to know about a certain topic. I begin in the program Por la Buenas broadcast by the regional channel Teleantioquia, a space of chronicles, focused on the good, within an era where violence in the city of Medellín was the daily bread. This first experience helped me to train as a researcher and to acquire the sensitivity that the trade requires. Then, I was also in Infrared of Teleantioquia and I currently research for Periodísticos Telemedellín.

How should these fears be faced to move forward with what is happening?
Claudia Arango: Our training as journalists should focus on moving the guts and "uncomfortable" the audience; that's when the real function of understanding what's happening is being performed. Fear must be felt, and for me it must be felt and then overcome.

Does investigative journalism have its own method or does it rely on other methodologies such as scientific research?
Claudia Arango: There are theories that you want because the academy is there to provide you with that support and that tranquility. Along the way one finds one's own methods and over time one creates one's own way, style and way of doing things. I always try to do everything under a synoptic picture.

When we are going to talk, for example, about female genital mutilation or cutting, this would be the process: 1) knowing what I need to do to explain the subject; 2) knowing the case, is what I call the "carnita", that is, the protein of that topic and is what will help me to exemplify, understand and put into real words what is happening; 3) find the protagonist of the theme; 4) determine who speaks to me, that is, if I need a lawyer, a doctor or a psychologist, among other disciplines, to help me understand the various perspectives; 5) resorting to the academy, for me it is always fundamental because it is like the balm, it is neither the party nor the counterpart, it is the professional who is researching in that area and; finally, 6) identify from the official side which public entities have done something about this situation. This is a matter of discipline, of listening a lot and of not "swallowing whole".

What lessons have been learned so as not to affect those who are chosen as protagonists?
Claudia Arango: It is important to know that behind any story there is a human being, who in many cases is part of a tragedy; for example, if a village is being rebuilt, it is worth asking, among other things, why they are rebuilding it or who died there. In this sense, we must put ourselves in the place of these people.

On the other hand, we cannot misrepresent the testimony of an interviewee within another context to manipulate, create ratings or controversy. Every statement becomes an editorial.

How to keep your feet on the ground and remember that the story should not revolve around the journalist or respond to business interests or a certain media?
Claudia Arango: We must fight against everything that seeks to favor a specific objective, be it political, economic, religious, social, call it what you want. There is a problem there.

You have won several awards, what have these recognitions meant for the work and for the companies where you have been linked?
Claudia Arango: In these years of trajectory I have added some journalism awards, which, if I remember correctly, are eleven in total. Most are individual and others shared. They have meant commitment.

When I won the first (Simón Bolívar Prize for Journalism), the first thing colleague Luis Alirio Calle said to me was: "Oh, Claudia, it was packed! I stared at him and asked him why you tell me that, to which he replied: "now people are going to measure you for that achievement."

In that perspective, the awards have been something that has forced me to reaffirm myself in being better.

How do their stories come about?
Claudia Arango: Sometimes they originate from the editorial board, in others, on the other hand, I have been the creative oneself, obviously always listening to the team.

This process of creation considers it of the utmost importance, to watch television; for example, I watch a documentary on Discovery on the subject of genital cutting and wonder if there will be genital cutting in Colombia? I dedicate myself to research and I find that it is not only in Africa, but also in Colombia it happens.

We are talking about practices in indigenous communities, four hours from Medellín, and there I think something must be done because it is one of the cruelest things that can be done to a human being.

In the same way, watching television I find the rental of bellies and I wonder if in the city of Medellín bellies are rented. I consult and indeed they are rented, but immediately the questions arise who? and where? It is found out through a lawyer and it is found that there is a gap in Colombian legislation, and by the fact that it is not prohibited, then it can be said that it is allowed. This is how you tell stories and evolve.

Other stories are born from press breaks. Recently I saw one in the newspaper El Colombiano in Medellín and in four lines it said that a young man from the city was the best water polo player in Brazil. I find out and yes, he is the most important player in Brazil.

What have you learned from the protagonists of your stories and how to read the information they provide to make it more attractive and interesting?
Claudia Arango: From the protagonists of the stories you learn a lot. One way I use to approach them and allow the interviewer-interviewer ice to break is to make a good reading of the characters. Many times you find some very serious, then you start and look, you see a horse on the desk, you see another horse in a room and another in the tie, then you come and ask: since when do you like horses? This question causes the attitude to immediately change and the ice to break as if magically.

In that sense, we must talk with them and analyze them; one can break the ice that there is many times with the character and, in addition, it serves to discover on the fly aspects that, in the previous meeting either through a personal or telephone meeting, could not be discovered.

The above makes it possible for the story to change and new elements come out, from that perspective, you have to have your senses awake, mainly listen to what it is saying. You must hear and see beyond, which implies being very attentive to the general context of the story you want to tell.

What do you think of the censorship that journalism has faced, especially in recent times in Colombia?
Claudia Arango: Censorship in journalism has been historic and hopefully it does not exist, for the sake of journalism and the journalist. However, we must warn of another type of censorship, which I consider to be more delicate and is what I call self-censorship. We have to find out what it consists of and how it affects us, because it can be more delicate many times this than the censorship of the medium.

On the first anniversary of the collapse, the Space building, located in one of the privileged sectors of Medellín, the question arises about how to tell this story without interviewing the same family, the drama of the demands or go to the site and say "here the building collapsed". These facts become necessary and important elements for this case, but how to do something different when I have the time, the human and technical resources to do it. Again for this case was to see Discovery ID (Investigation Discovery) and find a story very similar to the one I had to tell.

Many times things are already invented, but the concern arises about how I adapt them according to the case and make them mine. That's how the Space story was told, the collapse of ethics. October 12 marks one year of the episode that marked a milestone in the recent history of the City. The Space building collapsed and took with it, the lives of 12 people, and left a large number of families affected. With the idea of remembering the victims and knowing who they were, this documentary approaches some of the families, and through them, tells about the lives of those human beings sacrificed in one way or another, in this event. A documentary, dedicated to life and that calls for what many consider the cause of the tragedy, that is what Space talks about, the collapse of ethics (Arango & Uribe, 2014).

Together with Federico Uribe, we reconstructed what happened on the last day of some of those affected, resorting to three families with whom we had contact: their voice and their story, since they got up, went out, ate, among other actions.

Precisely this program was recognized and awarded. What the jury highlights was the different way it was told. And look it was nothing new.

With this interview it is expected that public opinion will be able to perceive a closer vision of the role that journalists must fulfill, their responsibilities, duties and commitments to citizens, especially in these difficult times that this profession is going through, not only in Colombia but also in the world where, from different areas, journalism is questioned. This interview also focuses on the fact that both practicing and training journalists can make a deep reflection and that thus, the journalistic exercise resumes its course to continue being the medium that gives voice to citizens.

*The PhD Luis Fernando Gutiérrez Cano and the master Luis Jorge Orcasitas Pacheco are professors of the Faculty of Social Communication Journalism of the Pontifical Bolivarian University. In this article they have the special collaboration of Paula Andrea Tilano Gómez, Andrea Cano Gaviria, Natalia Higuita Benítez and Juanita Cortés Saldarriaga, students of the Faculty of Social Communication of the same university.

No thoughts on “Journalistic research for TV”