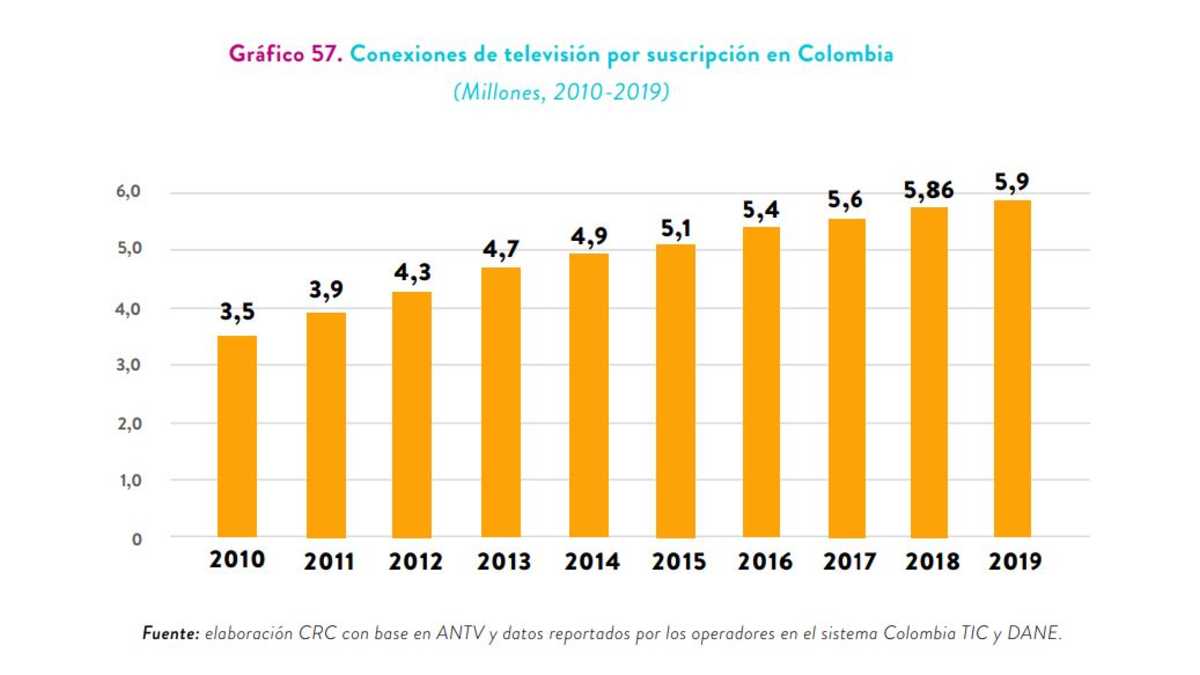 The Communications Regulation Commission presented the results of its 2019 ICT and Postal Industry Report, which analyzes television, radio, OTT services, among others, at the end of 2019. In addition, it makes an initial analysis of the sector during the pandemic generated by Covid 19 in 2020. We present some conclusions.

TV and OTT penetration
In its report, the CRC points out that with regard to television services, according to the information recorded by Global Data, the penetration of free-to-air TV in Colombia presents stable values in recent years and close to the total of Latin America, with percentages of 92% and 94%, respectively. As for subscription TV, Colombia's figures also resemble those of Latin America, with penetrations of 38% and 39%, respectively.

As for the average subscription revenue (ARPS) of subscription TV, there is a relative stability in recent years around US$14 in Colombia, with figures close to the value of Latin America as a whole, which stands at an ARPS of US$17.3 for 2019.

In terms of market share, it has to be that, at the end of 2019, the operators Claro, Tigo, Movistar and DirecTV, grouped 91.2% of the accesses to TV by subscription. In terms of revenue, the distribution is similar, accounting for 93.6% of TV revenue by subscription.

Dynamics of OTT services
OTT services show sustained growth for both Colombia and the region. According to figures from Global Data, the country had a penetration of 22.3% in 2016 that has been increasing to reach 35% by 2019, while, for Latin America as a whole, penetration was 20.1% at the end of 2016 and 31.1% by the end of 2019

At the beginning of June 2020, the CRC published the second study on the role of audiovisual, mobile voice and messaging "Over the Top" (OTT) services, which aimed to update the panorama of penetration, scope and role played by these services in the Colombian communications sector at the end of 2019.

The study identifies the penetration and status of the adoption of OTT services in Colombia. In that sense, 33% of respondents consume free audiovisual OTT services, mainly YouTube, with 26% penetration. On the other hand, 24% of respondents consume paid OTT, with Netflix being the favorite with a penetration of 17%, followed by other platforms such as Claro Video, HBO Go and DirecTV Play, each with 3%, and Amazon Prime Video and Movistar Play each with 1%.

Regarding the sociodemographic profile of consumers of audiovisual OTT services, the study found that young single people between 15 and 26 years old are the ones who consume these services the most (43%), of which 53%, called "heavy users", consume audiovisual content for more than 8 hours a week. In contrast, 38% of people who do not consume OTT services are over the age of 51, are married or in a free union, and have children.

Subscription TV
The number of subscription television connections in Colombia reached 5.9 million in 2019, representing a growth of 0.6% over the 5.86 million connections reported in 2018. With this, the penetration rate of the service in terms of households stood at 37% in 2019. In accordance with the performance of the connections, the revenues received from the provision of this service registered a slight increase of 0.6%, going from $3.17 billion in 2018 to $3.19 billion in 2019.

Radio
At the end of 2019, there were 1,588 registered stations in Colombia, which received $630 billion in revenue throughout the year. Of these, 41.8% had a commercial purpose in their activity, while 39.4% was of community vocation and the remaining 18.8% was of public interest. Commercial broadcasters accounted for most of the revenue, receiving $540 billion per advertising guideline in 2019. Likewise, it is important to note how this source of income has been exhibiting a decreasing trend during the last years, reducing by 21.7%, in real terms, between 2014 and 2019

Antioquia, Bogotá D.C. and Valle del Cauca concentrated about a third of the commercial stations, while Antioquia, Cundinamarca, Santander and Boyacá grouped 40% of the community stations. In turn, Antioquia, Nariño, Cauca and Boyacá collected just over 30% of the stations of public interest.

Antioquia was the department that registered the highest number of stations in 2019, with a total of 197. Of those, 146 operated in the frequency modulated (FM) band, while 51 operated in the amplitude modulated (AM) band. For its part, Bogotá had 66 stations, of which 34 transmitted on FM and 32 through AM. In contrast, the departments of Guaviare, Guainía, Vaupés, Vichada and Amazonas, presented the lowest number of stations, adding less than 20 among the five.

Finally, with regard to audiences and content consumption, it is important to note that, according to the Continuous Radio Audience Study, at the end of 2019 86% of the population in Colombia listened to radio. Of these, 76% preferred music stations, while the remaining 24% looked for spoken ones. In that sense, in the music segment, Olímpica Estéreo consolidated itself as the leading station in large and intermediate cities, while the leadership in the spoken segment remained strongly disputed between Caracol Radio, La W, La FM and Blu Radio.

Services during the pandemic
The National Government, through Decree 464 of 2020, declared telecommunications, sound broadcasting, television and postal services as essential services, in order to guarantee the provision of the same and that the population has communication and information facilities during the State of Economic, Social and Ecological Emergency due to the pandemic generated by Covid 19.

To guarantee access to telecommunications services, which were declared essential public services, the National Government, through Decree 540 of April 13, 2020, defined that the plans for mobile voice and data services, in the modalities of prepaid and postpaid of up to 2 UVT (71,214 pesos), were exempt from VAT (today at 19%) for four months⁷.

For its part, the CRC has taken a series of measures to face the consequences of the pandemic caused by COVID-19, including the issuance of Resolution CRC 5941 of 2020, whose objective was aimed at protecting the rights of users during the period of validity of the State of Economic Emergency, Social and Ecological, time in which the operators of the telephony, Internet and television subscription services will not be able to generate any charge associated with interest for late payment for the non-payment of the service. The Commission clarified that in any case this temporary facility does not imply the forgiveness of the sums owed.

In the area of open television, the obligation was established for operators broadcasting news content with Colombian sign language interpretation, who had to implement colombian sign language interpretation in at least one news broadcast per day for those notes related to the international and national evolution of COVID-19. With this measure, more than 540,000 deaf and hard of hearing people benefit.

In relation to sound broadcasting, a study carried out by Datexco indicates that 61.6% of respondents increased the consumption of this service in the country due to national confinement measures. Likewise, according to information from the National Consulting Center, in the months of April and May 2020 compared to the same months of 2019, the increase in the radio audience figure due to the effects of the confinement was 1% and 2% respectively. On the other hand, at the global level it is observed that the consumption of radium due to the effects of the confinement has been maintained or increased in high proportions and the level of consumption in Colombia remains at the levels observed internationally.

No thoughts on “Panorama of radio and TV in Colombia”