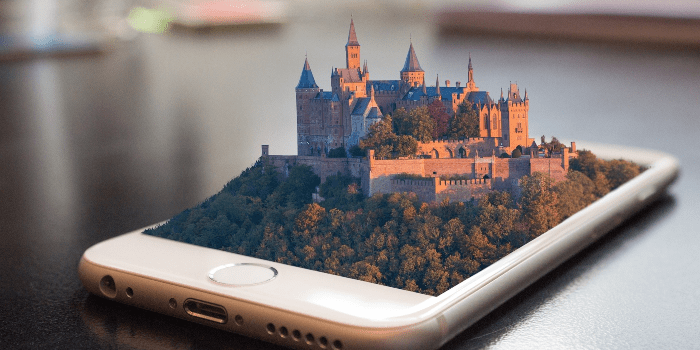 Real-world content and content generated by computer graphics (CG) are not able to respond to each other. There is a trend in the market to use AR and MRI indifferently.

The enormous advances in computing technology in the world created the foundations for the development of the so-called Virtual Relidad (VR). VR, from the point of view of its functionality, is a complex simulation in which computer graphics are used to create a virtual world of real appearance. This synthetic world, if you will, is not static and responds to the inputs generated by the user (gestures, verbal commands, etc.). In this way, one of the key elements of VR is defined, which is real-time interactivity. Real time here means that the computer is able to detect user input and modify the generated virtual world instantly.

Virtual reality can also be implemented as a television mounted above the user's head, equipped with a simulation mask, which includes 3D images with a wide peripheral effect, focus and optical controls, stereophonic sound and with the additional ability to include fragrances.

William Bricken captured the essence of VR when he said that "Psychology is the physics of virtual reality." Virtual worlds are built by the senses and only really exist in the minds of users. VR is a means of extending the body and mind.

Current virtual reality systems have possibly crossed the psychological threshold, in which human perception is so immersed in simulation that it begins to feel some of the sensations of "being there", at the dawn of a powerful presence. VR technology is the sum of a hardware and software system that seeks to perfect a totally inclusive, immersive sensory illusion of being present in a different environment, another reality; a virtual reality.

Despite the technological sophistication currently achieved in VR, the quality of experience (QoS) achieved still requires intense evaluations and, on the other hand, there is a great deal of propaganda about the creation of very high resolution images that are hardly achieved in practice, appreciated individually through displays mounted on the user's head. Augmented reality (AR) is achieved in this way.

AR has been around since the 90s, but the availability of very high-power, relatively inexpensive and very fast processing is very recent and high-tech AR is now available to broadcasters in order to experiment with new formats for television.

Combining powerful machines for real-time graphics, with sophisticated real-time 3D mapping capability and tracking technologies, it is possible today to use AR in production studios and live events, especially in sports.

Augmented Reality (AR) or Mixed Reality (RM)
According to visual effects experts, AR is an overlay of real-world content, but this content is not anchored to, or is part of it. Real-world content and content generated by computer graphics (CG) are not able to respond to each other. There is a tendency in the market to use AR and MRI indifferently – but they are not really the same thing. Specialists in special effects software believe that THE RM is an overlay of synthetic content about the real world, anchored to it and interacting with the real world. Devices on the market, which typically represent the MR, are Microsoft's HoloLens and the Magic Leap head-mount display.

The key to successful AR is to align 3D objects created with the GC of acurdo with, say, movements of a smartphone with its user in the real world. This alignment is typically achieved by tracking systems that exploit the cell phone's camera, motion and GPS sensors; the output delivered by the tracking system is sent to a rendering machine; and the 3D objects are then properly superimposed on the user's display. There are currently several development software kits (SDKs), for example Vuforia, Wikitude and ARToolkit for the development of applications in AR.

The Pokémon Phenomenon
Augmented Reality (AR) on smartphones was always seen as a game for addicts until the virtual phenomenon Pokémon Go appeared in 2016, with more than 100 million downloads from the internet in a few weeks. Pokémon Go uses GPS information to mark the player's location and to move their avatar, using camera functionality used to display real-world characters.

Another example of AR that grew enormously in popularity was that of Snapchat, which brought out the World Lenses for AR. Users of this device can choose different 3D objects (e.g. flowers, rainbows, clouds, etc. – updated every day) that can be inserted and placed in their stored photos and videos. In user videos, for example, it is possible to resize objects and reposition them as if they were actually present in front of the lens. Technical details on how World Lenses works are not available but it is very likely that a combination of computer vision algorithms and inputs to smartphone sensors (e.g. the accelerometer) will be used.

In an event that occurred some time ago on Facebook, two new tools were discovered: the Fram Studio, which allows the in-camera creation of frames for video and photos, and the RA Studio. The latter allows the design of location-specific filters (as in Snapchat's Worls Lenses) along with real-time adaptive filters, which can change depending on the number of people who are watching a Facebook live broadcast, what they say in the comments, etc.

Incorporating AR into new devices
As far as is known, the technology used in Facebook's AR camera is called Simultaneous Localization and Mapping or SLAM. This technology allows a robotic device (e.g. driverless trolleys) to generate maps of its surroundings and, simultaneously, orient itself properly on that map, all in real time. This is a classic chicken and egg problem that is solved by means of mathematical representation with specialized hardware (e.g., depth cameras, LIDAR, etc.) that obtains information from the environment. As far as is known, neither Apple nor Samsung, the two giants in cell phone manufacturing, own an AR camera.

In 2017, Microsoft brought to market the Story Remix, an editing tool that allows users to automatically create featured videos from images and videos, along with an audio track. It is not a tool in AR but, despite this, it allows the user to play with 3D objects that can be added, for example, to the video to follow a person as he moves through the environment. ARKit works with Apple A9 and A 10 processors. It uses Visual Inertial Odometry, to track in the real world, visual elements for the detection of horizontal planes (e.g.: floors, tables), and is able to apply appropriate lighting to objects generated by a CG, relying on the lighting of the environment.

Only a few of the many technologies that exist on the market have been mentioned here. These are technologies that advance with great speed and sophistication and that will surely amaze us much more in the near future.

No thoughts on “Impacts of the new reality”