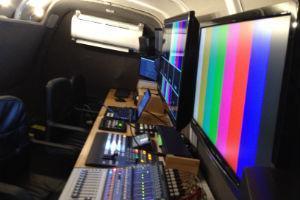 Aerolito HD developed the first mobile unit in high definition designed and assembled in Medellin, Colombia. A solution according to the needs of the client and optimizing the use of the equipment.


The company Aerolito HD S.A.S., based in Colombia, officially presented at the latest version of ExpocomuTV, a fair held in Medellín last September, its mobile high-definition television unit designed and assembled by purely Colombian personnel.

A year after its formation, the company chose to acquire its own mobile unit of television in high definition, with the purpose of supplying the growing demand for audiovisual content of the current market. In this way, he acquired for the assembly of the mobile unit a Nissan Urban vehicle, which has good space inside, and to which a Samsung 2BTU brand air conditioning system was installed.

This mobile unit was designed for the realization of sporting,  cultural events, concerts and television programs, both for live and recorded broadcasts, although it has the possibility of streaming in HD.

In order to have greater clarity regarding the design and assembly of this first mobile unit in high definition, three basic aspects were taken into account. Initially the aesthetic; also comfortable. Without ignoring the functional  and practical. In these three levels, the technical work mixed with the design, the excellent optimization and distribution of the space and the fine detail of the finishes are combined.  To all the above is added the combination of a simple and attractive decoration, added to its total functionality and operability.

Assembly
As for their respective assembly, different materials were used that combine aesthetics with strength  and  durability. For all the furniture was used treated and processed wood, accompanied by elements such as  aluminum, iron, sheet, plastic and acrylic, and others.


This mobile unit in high definition has the capacity to operate a total of eight cameras with SDI-HD connection. It can also have four remote PTZ cameras controllable via LAN and four ENG cameras. Aerolito HD currently owns, only for the mobile unit, four Panasonic AW – HE120 brand PTZ remote cameras and four Panasonic AG-HPX250 ENG cameras.
Within its meticulously thought out internal distribution of the space, it can comfortably accommodate a maximum of five people, including: camera director, sound engineer, VTR and character generator and production director.

The equipment used for the production chain that was installed inside the mobile unit in H.D. are: Panasonic AV-HS410 (main) video switcher, a secondary switcher for pre-monitoring of ptx cameras a Panasonic  AW-HS50 and a remote control for Panasonic AW-RP50 PTZ camera . In addition, equipment from well-known brands in the Latin American market was used for the entire assembly, such as: Blackmagic, Sony, Datavideo, Toshiba, Dlink, - Cisco, Samsung, viewsonic, Presonus, Numark, Yamaha, JK Audio telephone hybrid and Lacie.

In addition, it has a UPS of 5KVA, and although the current energy consumption of the mobile oscillates in 3.9KVA, in the electrical distribution there is a totalizer system control of energy input with breaker of 20A per phase and distribution of the nomenclado electrical wiring.

As for all the wiring used for its respective assembly, this is Gepco brand for video and Canare for audio; the connectors and their connection both in their external panel and also internally in the mobile unit are of Amphenol and Neutrik brand.

One of the particularities within the design is the construction and installation of a dual rack module, supported by a rail system, which allows easy handling for adjustments and maintenance.  In its upper part it houses a Teranex processor from Blackmagic, a patch bay in HD, while in the lower  one goes everything related to the conversion system, video distributors, routers and controllers in HD, with a correct and organized distribution and signaling of the wiring.  In addition, it has two Ethernet networks, one for service / maintenance and administration of equipment connected via LAN, and another network with 4G LAN/Wifi internet, which allows file exchange between users inside the mobile unit.

The time spent between the design and assembly of the project was 16 weeks
And around ten people participated in this one, including carpenters, mechanics, electricians and assistants belonging to the Hangar Group company.

The manager of Aerolito HD, Alvaro Alzate, said: "There is demonstrated once again the capacity, talent and creativity of the staff that the city has and especially the company to develop, not only, excellent audiovisual content as we have been doing, but also, the level of knowledge and experience for the realization of projects, as was the assembly of the first mobile unit in HD in Medellín".

This company, dedicated to the creation of audiovisual content for the local and national market, was created at the beginning of 2012. It currently has the latest in cutting-edge technology and provides its services to the public and private sector. Recently, it signed an agreement for the use of the high definition platform of the Spanish company Multistream.


*Jorge Mario Valencia Herrera, Electronic Engineer and Audiovisual Communicator. For eight years he has worked in the technical part, production and design in different television channels.

No thoughts on “Local design and assembly”