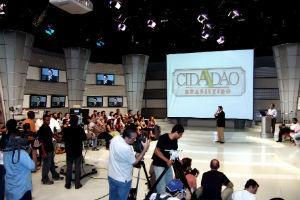 Among the latest developments in materials that the industry has for the sound insulation of recording studios, is cotton. It is subjected to an anti-fire treatment before being used.

In pre-recorded television productions, as well as in the live transmission of programs, sound plays a fundamental role in making viewers live sensations and emotions.

But it can also become one of the main distracting factors that can harm the final result of production. And around this theme plays a fundamental role the behavior of sound within the studies.

Nowadays, when it comes to undertaking the adaptation of a recording studio, large production companies are more concerned with how the sound works within the spaces than with the acoustic separation of it.

This is stated by Antonio Argibay, founder of Meridian Design, an American company dedicated to the design of recording studios for radio and television.

He adds that this change is due to the fact that now the production companies seek to have studios that can be as versatile as the programming of the networks.

Internal and external noise
Another of the recognized professionals within the industry in Latin America in sound and acoustics for recording studios is the Argentine Sergio Molho, founding partner and director of International Relations of WSDG.

He explains that to control the sound you have to take into account the conditions in which the recording studio is located. A studio on an elevated floor, in the city, in the countryside is not the same.

"There are two types of noise that must be controlled in a study. The one that comes from the outside and the one that is generated from the equipment used inside it. It's a two-way isolation."

Outside noise can be generated by trains, cars, ports, airports, industries, and even because a person is talking or screaming around. This must be controlled from walls, floors, doors and windows.

Normally the walls and floors are used double, one that is the structure in adobe or concrete and another that is the insulating material. In turn, this isolation allows that the sound that is generated by the recording will not affect the places adjacent to the studio, whether they are other studios or residential areas.

"I have been aware of studios in which you can not record at certain times because the noise that comes from outside is so loud that it prevents recording. There are other cases in which it can not be recorded because the noise generated affects the neighbors. This is wasted time that cannot be allowed," says Sergio Molho.

In the case of the noise that is generated inside the recording studios, the main factor that must be controlled is the air conditioning, essential to control the temperature, but at the same time the largest element that generates noise and is difficult to control.

The most used materials
Antonio Argibay states that for the double walls plaster and metal plates are used. And between the two you must install material that absorbs sound so that it avoids echo or rebound. For this the most used is mineral wool and sealed or wrapped fiberglass.

"Among the novelties with which the industry has been working for the isolation of the studies are the products with cotton. These are subjected to an anti-fire process before being used to minimize the risks of the study," says Antonio Argibay.

For his part, Sergio Molho assures that in Latin America the ways of doing isolation can be identified: with gray or dry work. The first is based on cement, which is one of the most used in Latin America because it is low cost.

The second is with drywall and other materials such as iron, metal, glass, leather, fiberglass, which although it is more expensive is easier to control the final result.

Doors and windows must also have special insulation. Normally the studios have two doors: a large one for the equipment to enter and that is not used during the recording.

For the doors of entry of people, the usual thing is to install two doors with a small corridor in the middle,

Latin America moves forward
Although in Latin America there is a growing interest from producers to comply with international standards on acoustics for recording studios, only the largest channels have the right studios.

"In the countries of the region you find everything. Some do not have isolation, in others they have it halfway and there are those who spend a lot without obtaining the expected results. But in general it is the big chains that are best on this issue."

Sergio Molho argues that the countries with the best studies are Brazil, Argentina, Mexico, Colombia and Chile.

While Antonio Argibay indicates that the leading countries in telenovela recording in the region such as Mexico, Venezuela and Colombia, are the ones that have the best studies for this purpose.

Save money
Sergio Molho indicates that the most important thing when undertaking a sound isolation project for a recording studio is to have an acoustic consultant.

"The idea of hiring a professional of this type is that you can have a suitable project. He evaluates the program so that it is not overloaded or undersized and helps the total cost to decrease because unnecessary works are not done, "said Sergio Molho.

He added that he has known cases in which channels with good economic capacity begin to execute reforms that do not have the expected result or that are not worth much more, just because they did not have the advice or the indicated plan.

No thoughts on “Isolation in studios is bidirectional ”