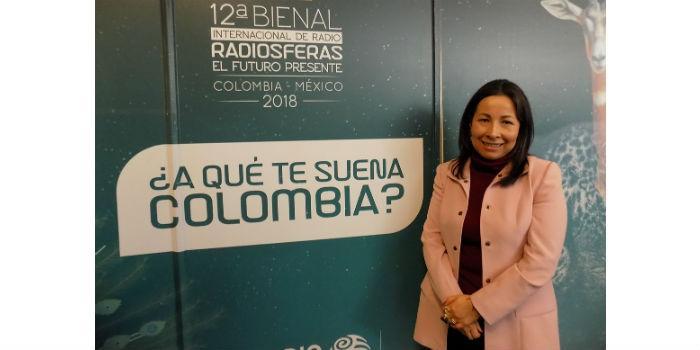 Colombian radio, and in general public radio, needs spaces to dialogue about what it is doing, to look at other experiences, to ask questions to enrich itself.

Although today Colombian radio is recognized as one of the best radios that exist in Ibero-America, both in terms of content production and in implementation and adaptation to technologies, radios in Ibero-America, particularly in Latin America and Colombia, have many challenges in light of all the transformations.

This was assured to TVyVideo+Radio by Dora Brausin, deputy manager of Radio of RTVC, and who was at the head of the organization of the 12th International Radio Biennial that was held in Bogotá. In this event, the future of public radio was analyzed from the voice of the different protagonists of radio throughout the region.

"The Biennial sought an agenda that contemplated the diversity of radio, because all topics fit on the radio. But in organizing the program we ask ourselves what are the challenges that radio has. It has challenges in the whole technological issue, not only from how it implements, but how it solves problems from technology. How to make radio appropriate by citizens, how to promote that appropriation. How radios generate content that addresses problems in which we are moving today, such as migrations," he said.

Dora Brausin added that the axes on which the theme of the Biennial was developed in Colombia, start from something fundamental, and that is that the radio accompanies, entertains, provides an experience. "The participants encountered radio dialogues in a context in which we make people feel that radio is a global experience and a meeting is generated. This was a meeting place, as is the radio."

Among the guests, both Colombian and international who were part of this version of the Biennial, were people who are doing radio, others who are outside the context of radio and people from other media, music producers who understand that radio is not only to broadcast music but the platforms through which artists move, as well as collectives that are doing radio with guests

In total there were 78 guests from 12 countries who narrated their experiences in 8 conversations, 6 workshops and a laboratory in which they joined the commercial, public, community and indigenous Spanish-speaking radios, marked the internationalization of the Biennial, which for the first time was done outside of Mexico.

Colombian case
According to the deputy manager of Radio of RTVC, in Colombia they are radial, sound, always looking for the emotion generated by the radio. From the local level, community stations are very important, indigenous communities seek to vindicate themselves through radios, in schools they are resolving many conflicts through school stations, universities have enormous challenges and are thinking and building questions about how to connect research and science with everyday life, with people's lives.

"In Colombia for the peace process the radio is the protagonist, it is striking that at the point of participation the medium that is most requested is the radio. This requires that in our radios we think, first if we are giving the spaces so that the whole society is reflected in it; whether we are proposing issues that facilitate inclusion; if we are building a language that makes it easier for us to recognize each other and not attack ourselves; how we are thinking about the language of radio," he said.

He added that all these are points on which public radios in Colombia have to question themselves in order to enrich themselves, so as not to be detained in time, even if they say that they have the best radio in the region at the moment.

"And if we are the best, we have the challenge of asking ourselves what we have and what else may be needed to strengthen it. I believe that all radios have challenges and asking the question is fundamental, if we would not fall into a comfort zone and if nothing happens, that is where crises come. I think it's the right time to ask ourselves the questions and be able to strengthen ourselves," concluded Dora Brausin.

The challenges of public radios
At the end of the 12th International Radio Biennial, the organizers, among whom was also Radio Educación de México, stressed that "the spirits do not conclude, they expand, therefore we present not conclusions but challenges resulting from this 12th. International Radio Biennial that call us to give them attention and follow-up, since they have been built over 4 days of work, with the contributions of all the people, groups and institutions involved".

Public radios are projects of the state, not of the Government, they are at the service of audiences, of the whole society.

The idea of the public includes community radios, indigenous radios, university radios and all those that have a non-profit service mission.

Radio is one of the most relevant spaces in the world that accounts for migrations. By showing them not only as news, but as a historical, collective and cultural phenomenon, migrations are integrated into radio discourses and narratives.

The importance of music on the radio, in addition to its cultural relevance, lies in its creative quality of radio discourses and narratives by itself.

Every internet radio is an international radio.

Radio takes various forms to reach everywhere and all audiences: it is Hertzian transmission, over the Internet, it derives in podcast, it is memory through its archives.

Within the framework of this declaration, Bi Radio was also created, a collective for the strengthening and expansion of the International Radio Biennial.

No thoughts on “Public radio must be enriched”