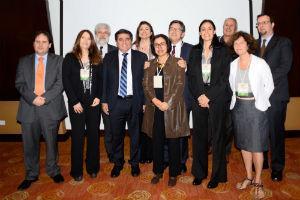 At the end of September, the PRAI partners met in Bogotá to consolidate the entity and define the work of the coming years. Colombia assumed the presidency.

While it is true that the technologies to produce and consume audiovisual content advance rapidly and generate changes to which channels, producers, subscription TV operators and viewers, in terms of regulation it seems that things are not going at the same pace.

For the past five years, the countries of Latin and Central America have been advancing reforms to the policies that govern television, some based on technology and others on political motivations. But the question everyone is asking is whether these changes have prepared them to face the challenges that the new realities for the sector bring.

How to prepare, what should be regulated and what is the limit of the new standards, were some of the questions that were analyzed during the last meeting of the Platform of Audiovisual Regulators of Ibero-America, PRAI, which was held in Colombia at the end of September and which brought together representatives of 14 countries.

In his speech during the forum, the Minister of ICT of Colombia, Diego Molano Vega, caused controversy with his presentation, because he gave a vision that some described as fatalistic for the future of television and the challenges proposed by new technologies.

Molano Vega said that "Television emerged with a sustainability model based on advertising. The advertisers were the ones who generated the income for the producers to make their programs, broadcast them on public TV and in the homes they were all gathered watching TV. With the advent of subscription TV, content and channel options to advertise multiplied. Channel revenues also decreased and televisions per household increased, segmenting audiences. Now, the internet has once again changed the landscape with new ways of watching content through OTT and VoD, on platforms such as Youtube and Netflix, providing even more options for advertisers."

The Colombian Minister added, as an example, that today most of the advertising cake is held by Google and its Video Portal Youtube, which this year reached one million advertisers, above the tradional channels that at one time occupied the first place. stressed that the marketing budget of companies has not increased and should be distributed among more options.

And if you take into account that Pay-TV and the internet have wiped out borders, i.e. a person broadcasts content from anywhere and can be seen anywhere, it makes it difficult for regulators to exercise control.  What is the role of public TV? How are content regulated on new platforms without borders? how to protect the prosumer? How to protect copyright? How to develop local content and strengthen local industry by being a good business? What should be the new tax scheme? There were some of the questions proposed by Diego Molano at the end of his speech.

One of the people who disagreed with the Minister was Eladio Gutiérrez, a Spanish specialist in digital television with extensive experience in the subject. He assured that on convergence there is a lot of talk but little analysis of reality. And he gave as an example recent statistics from the United Kingdom, in which only 10% of viewers access content from mobile devices and 85% do so in a traditional way.

"My bet is that linear TV has long years to live, many years to live. The position of the viewer in front of the TV is eminently passive, not an active process of saying now I want to watch this program then I will enter the internet to the page of the producer. That has not happened with the speed that some predicted. I think there is a lot of verbiage and little of plausible realities and objective measures," said Eladio Gutiérrez.

In the same sense, Ricardo Villa, director of interactive media of Spanish Television, said that in the last ten years the consumption of daily television among the ex-añoles increased, going from 192 to 300 minutes.

"Although linear television has a long life ahead of it, it must reinvent itself to face the new technological challenges. The channels must leave the TV, today producing a series requires including applications for mobile devices, games, generating interest in the story so that they continue to talk and interact with it while the new chapter is broadcast." On the need to update the regulation taking into account the realities of the near future with the convergence between DTT and new forms of transmission, Eladio Gutiérrez indicated that neither in Latin America nor in any other country has it been considered, so it should not be a cause for concern.

In turn, Gustavo Gómez, a UNESCO researcher, indicated that the region is reviewing TV laws, but they are not responding to new realities such as digitalization and convergence. They are being scattered or partial laws. "Is TV regulated or what? We should not be regulating television, we must create laws of audiovisual media services, including linear platforms such as traditional television and non-linear platforms such as video on demand. It is to base regulation according to services and not technologies, as happens in Latin America. Today they end up being ineffective and weak to control and sanction," said the UNESCO representative.

He also pointed out that the new regulations should seek to protect copyright and fundamental rights, understanding that these are based on freedom of expression. To achieve this, access to free-to-air TV and Internet services must be guaranteed and there must be less concentration of media in the same owners, a common situation in Latin America that generates centralization of information and affects freedom of expression.

Colombia assumes the presidency of the PRAI

The Platform of Audiovisual Regulators of Ibero-America, PRAI, is an association of regulatory entities that was formed in 2010 in order to enhance and support the work of independent regulatory entities of Ibero-American countries, in their work to guarantee human rights, cultural diversity and representativeness in the audiovisual content broadcast and distributed to the various audiences.

During the meeting in Bogotá, organized by the National Television Authority, ANTV, the founding partners approved the statutes for the Platform. Among other points, it stands out to be a space for joint reflection on the regulation of television and other forms of audiovisual; to become a platform for the exchange of information on legal and regulatory aspects of common interest to all regulators, and to be configured as a space for the discussion and dialogue solution of problems and dissensions between regulatory entities. The working languages are Portuguese and Spanish.

At the same meeting, it was defined that there will be a rotating presidency with a period of two years. As the first country president, Colombia was appointed, headed by Beatriz Quiñones Cely, who is part of the National Television Board of the ANTV.  The country holding the presidency will also host the headquarters of the Platform. The vice-presidency shall be held by Chile.

No thoughts on “Should TV regulation be updated?”