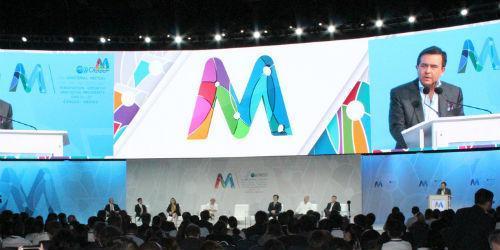 The Organization for Economic Cooperation and Development (OECD) held in Cancun, Mexico from June 21 to 23, the Ministerial Meeting of Digital Economy 2016, an event in which it invited to work together to preserve an open Internet, close digital gaps, take advantage of the potential of the digital economy and promote digital skills in member countries.

In statements given by the Secretary General of the OECD, the Mexican José Ángel Gurría, he indicated that despite the constant growth in the provision of internet service, half of the population in Latin America and the Caribbean still lacks access and it is urgent to promote broadband in the region.

The internet is very promising, but it needs to be supported by solid foundations such as broadband networks and other infrastructures and to equip the population with the necessary skills to be competitive in this digital economy. This was presented during the presentation of the report entitled "Broadband policies for Latin America and the Caribbean: a manual for the digital economy", prepared in collaboration with the Inter-American Development Bank (IDB).

The report acknowledges that today, the goal is to "provide everyone with an affordable Internet and foster online tools and digital literacy with a view to boosting innovation and productivity in the region." Additionally, the report recognizes that high-speed Internet continues to be very expensive in the region and highlights that competition cannot maintain competitive prices, promote innovation and enhance the capacity to respond to demand, which is usually "weak in the telecommunications sector" for the region.

To counteract this situation, it recommends amending laws that discourage the entry of new operators and introducing reforms "in order to guarantee full liberalization of telecommunications markets." Finally, the document considers that the most effective way to address market dominance problems and reduce the barriers to entry of new entrants is to give regulatory bodies independence. "Mexico and Argentina are good examples of countries with independent, converged regulators overseeing both the telecommunications and audiovisual sectors."

The Ministers and representatives of 41 countries, including Argentina, Colombia, Costa Rica, Ecuador, Egypt, Indonesia, Latvia and Lithuania committed themselves in a Ministerial Declaration to:

In the local framework, subscription television operators and regulators discussed current events and trends in the sector in Colombia and Latin America at the Andean Telecom Forum, an event held by CINTEL and the multinational firm Informa Telecoms & Media in the city of Bogotá on June 14 and 15. Juan Manuel Wilches, expert commissioner of the CRC, referred to  the importance of a regulatory restructuring, resolution 1387 of 2016 and the Quality Regime Proposal, according to the director of the National Spectrum Agency -ANE-, Martha Suárez Peñaloza, the advances of the ANE revolve around the issuance of regulations on exposure to electromagnetic fields in Colombia.

One of the conclusions of the contest is that excessive regulation tends to hinder progress on various issues. "A review of the regulatory framework of traditional operators is necessary. It would be necessary to equalize burdens among all of us who are in the value chain on the Internet," said Santiago Pardo, Vice President of Regulatory Affairs of América Móvil, in an interview published on the CINTEL website, in this same we found that some entrepreneurs attending the event expressed their positions to boost the sector. "Innovation is summarized in integrative technology solutions, but sometimes we forget how important marketing is as a strategy," said   YOUNCTA Commercial Manager Ercole Davide Rovida, one of the companies in IP solutions that participated in the event. Source: www.cintel.co

In this same congress the CRC tries to analyze and identify the regulatory challenges that the Internet of Things brings, according to the International Telecommunication Union -ITU-, the Internet of Things (IoT, for its acronym in English) is the advance that can bring the greatest potential for innovation and transformation to the Sustainable Development Goals. Considering the efficiency and optimization of resources that the Internet of Things allows, Dr. Germán Darío Arias Pimienta, Executive Director of the CRC, presented its impact on the offer of public services and information and communications technologies, one of the central themes of the Andesco Congress.

The goal of IoT is to help revolutionize developing countries and significantly improve the daily lives of many people. In this regard, the Executive Director of the CRC explained the challenges that regulation has to allow its appropriation and development in Colombia. "If what you want is to stimulate an Internet of Things market in the country, where free competition and investment are encouraged, then it will be necessary to have clear rules of the game that constantly balance the different types of control and the interests of the parties that intervene in your value chain," says Germán Darío Arias Pimienta. Source: www.crcom.gov.co

The engineer Ernesto Orozco Orozco, member of the National Television Board, for his part, presented in the framework of Andesco his conference on Digital Economy in the room specialized in Information and Communications Technologies – ICT and TV referring to the goods, products and services in which their development, production, sale or supply depend critically on digital technologies.

It is composed of four subsectors: infrastructures, applications, new intermediaries and e-commerce. He explained that in the new business dynamics, this phenomenon manifests itself both in the traditional and non-traditional Goods and Services markets, who take advantage of the reduction in transaction costs associated with capital, information traffic and human talent, use ICTs as a conductive channel, supporting the telecommunications structures and services provided by operators.

He indicated that despite the entry into the scene of new competitors, traditional television maintains its audience in the adult population (25-60 years) and its consumption has been increasing since 2012 to date. Linear television continues to be the main support for the consumption of audiovisual content, followed by mobile devices for a large difference;  ICT has decreased the participation of digital television but not its consumption, in this way the growth of platforms decreases as access to the Internet increases but this phenomenon has energized the business of audiovisual content. Source: www.antv.gov.co

Evidencing that the television policy that currently governs is considered by experts as "excessive" we find that this policy has caused 90% of community TV in Colombia to operate illegally, this chilling figure was revealed by ANTV itself during its tour in the cities of Bogotá, Bucaramanga, Barranquilla, Cali and Medellín, this tour was called "Spaces of citizen participation for the socialization of the modification of resolution 433 of 2013".

For many service providers under this modality, the conditions of current legality violate their legal rights acquired since the entry into force of Decree 1900 of 1990, recognized by Articles 1, 25, 35 and 37 of Law 182 of 1995 and Article 24 of Law 335 of 1996. They warn that those who want to continue providing the service must process a new request, which would undoubtedly be an unusual act, that the ANTV declares illegal some communities that have been providing their services for more than twenty (20) years covered by administrative acts based on Agreement 009 of 2006  and complying with the mandates in Laws 182 of 1995 and 335 of 1996, undoubtedly, the majority has complied with the requirements of the administrative acts issued by the CNTV replaced, in those matters by the ANTV having currently in force some enabling titles.

Only 10% have complied with the provisions of Resolution 433, leaving a remaining 90% on the grounds of the cancellation of the authorization or license by that rule, paradoxically the one on the ANTV page we find a great headline "Community television does not end, it is strengthened".

The only thing that is strengthened are the control measures, without a doubt both seminar and forum of the ANE, the CRC, the SIC and of course the ANTV do not have a different purpose than to socialize all the control and surveillance measures that will put in trouble all the service providers in their different modalities, said by the Director of the ANTV: "The community needs to understand the rules of the game to be able to compete in an increasingly demanding market".

From her point of view so far the non-compliance is due to the fact that they do not understand these rules, the Director invited the participants to approach the ANTV to determine the future of their associations. "Licensees need to be clear about what they want to be, because community television cannot compete with subscription television because they are two completely different models. Once defined how they want to continue operating, the Authority will give them effective ways to continue operating in their model or migrate to another television service."

Their position is very clear, either they abide by the norm or migrate to being subscription television. Personally, I believe that things that, by nature, are different cannot be measured by the same rules, which is something that leaves these small organizations at a disadvantage.

This audiovisual market is not to end, which generates changes permanently and much more now with the opening to the generation of a third private channel in Colombia, The Obando family, a native of Antioquia says that it is willing to give the fight to be awarded, in statements to the newspaper La República they state that they want to participate in said tender because, as they state:

Currently this business group has the Cosmovisión channel and its retransmission is limited to the negotiation they establish with the cable companies. In another part of their statements they add: "We think it is very democratic to think that television can be decentralized because the two private channels are in the capital. With the third channel it would be a great opportunity for television to decentralize from Bogotá. The TV market continues to grow and there is still a market share to be gained.  Platforms like Netflix are consuming a lot of the internet and cable operators are closing the doors. Having distribution as a national medium is becoming increasingly complex. There are companies like DirecTV that don't even open the door for us."

The Obando family has ventured not only into television, they are preparing their arrival on the radio with the Cosmovisión Radio station that will initially broadcast from Medellín on the frequency 88.5 FM in August. Their audiovisual experience with the Cosmovisión channel has led them to have the Air Tv channel that is broadcast in the waiting rooms of the El Dorado airport and this idea of content offer was extended to country clubs and gyms. We will have to see the audiovisual offer that the paisas will give and I hope to apply the new models and platforms to be in accordance with the new habits of consumption and commercialization of telecommunications. Source: www.larepublica.co

Many questions remain on the table that can only be resolved by regulators.

*Luis Pinto is a commercial technical advisor for TVyVideo+Radio.

No thoughts on “Role of TV in the new digital economy”