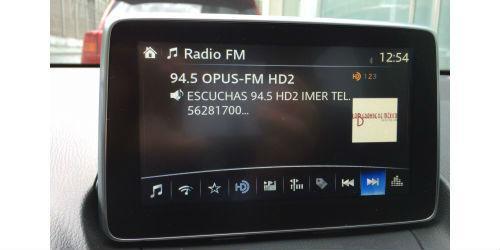 Although the process of adopting digital radio has been slow, expectations for the future are positive, since they remember that the same was the process when FM radio was implemented.

Since the defunct Cofetel adopted HD radio as a standard in 2008, Mexico began a process of transformation in the sector that today can be enjoyed in the main cities of the country and little by little it has been massifying throughout the nation.

To learn how this process has worked, TVyVideo+Radio spoke with Claudio Martínez, Vice President of Business Development for the Americas of DTS, the company that created the HD Radio system. He commented that before Cofetel chose the model, HD Radio had been temporarily adopted by stations that are in the border area with the United States. This was the first step in the decision to expand it to the entire country.

To encourage the implementation of this system, work was done with broadcasters, car manufacturers and receivers, in order to have the equipment available in the country so that listeners could enjoy HD radio. Until mid-2016 there were 54 stations on the air with HD radio technology, 47 digital channels, a total of 101 digital channels and by the end of the year the number will continue to grow.

He stressed that "the largest number of stations are in Mexico City and the border area with the United States. But all over the country there are broadcasters that already have digital technology. We continue to work with stations in different parts of the country to increase the number of stations that have their signal with HD radio. The advantage of this model is that it is hybrid, the broadcasters can broadcast their digital and analog signal, which favors the audience."

Interactivity and multiplexing, some benefits
The stations that are currently on the air have an infrastructure installed and to make the conversion to HD radio, they do not need to have a new license or change their frequency or spectrum, being able to maintain their infrastructure.

Claudio Martínez indicated that depending on the updated equipment that the station has, the new infrastructure to broadcast the digital signal will be little and maintaining a hybrid analog -digital system, which guarantees that they will not lose their listeners.

Another benefit is that to cover the same territory with the radio signal, a station uses 10% of the analog power with digital technology. This means a much more efficient system with substantial savings in energy consumption.

In addition, the multiplexing of the spectrum for more stations is an aspect that gives greater possibilities of emission, but also generates challenges due to the way in which these new channels can be financed.

"Part of the company's work is outreach, with broadcasters, so that listeners know about that technology. Working groups have been created through the Chamber of the Radio and Television Industry, Cirt, and also individually with broadcasters to generate ideas and create knowledge within the audience," he said.

For listeners
With HD radio, one of the main benefits for listeners is the improvement in audio quality, accompanied by other complementary services. To do this, listeners must have a digital receiver.

As an example of the additional information that HD radio allows for listeners, there is the name of the song or program that is being listened to at the moment, images such as the logo of the stations, the cover of the album, videos, delivering a much more entertaining and interactive experience.

"Interactivity is also offered. A system allows you to select the songs that the listener likes and give him all the information of these so that he can then acquire them by Itunes. They are currently working in Mexico to offer real-time traffic services in the future through digital vehicle receivers and navigation services," said Claudio Martínez.

He added that in just 4 years a fairly advanced process has been reached, more than 30% of the population has access to HD radio, added to vehicles, it bodes well for what is coming in the future. While much work remains, the progress that has been made is truly formidable. The 12 years that the United States has been in this work can be replicated in Mexico and that is why it is advancing.

The first to implement it
To achieve the massification of the HD Radio standard, important work has been done with all the sectors involved in the issue, but a fundamental part has been the public radio chain of Mexico and the car manufacturers in the country.

Toyota and Ford were the first car brands to offer their new vehicles with digital receivers in Mexico. To date there are 15 brands of cars that add up to 55 models, being the automotive industry a fundamental ally for the massification of HD radio.

The other important player in this process has been the Mexican Institute of Radio, Imer, which was the first chain of stations that began its digitization process under the HD Radio standard.

The Imer case
The Imer is the federal public radio medium with the largest number of stations nationwide. Its strategic coverage positions it in the center of the country and on the northern and southern borders, as well as in the Yucatan Peninsula. It currently has 21 radio stations of which 11 are FM and 10 are AM, in addition to a virtual and 39 digital channels.

The technical director of the chain, Miguel Fernández, told TVyVideo+Radio the experience of this process and the results obtained so far. "Being a government entity we wanted to lead the process. In 2008 we started planning it, in 2009 we obtained the resources and began broadcasting on 3 stations in Mexico City. In 2013, the 21 stations of the Imer were digitized. In addition, we have multicast stations, that is, we have two more stations on the same signal."

The first step for the Imer was to change all the equipment of the production and transmission booths, because the digitalization does not accept you or does not work correctly with mp3 and limit the quality of the sound on the air, they must be transmissions in mp4. For all the technological adaptation required, Imer's trained staff helped ensure that the implementation process was not traumatic.

As the model allows stations to have new digital channels, these are used to broadcast content for a specific audience, such as jazz programming, world music, and international radio Mexico, in which regional music is played. They are programming exclusively for digital transmissions.

"The economic viability of new spaces and content is one of the issues that most concerns when it comes to taking advantage of one of the benefits of digitalization. In the case of Imer, these new spaces are being generated with the same resources, but in Mexico they are looking for models for financial viability. One of the options allowed by the laws in the country is to rent those spaces to a third party, "said the technical director of Imer.

What's next
To help in the development and massification of this technology, the Imer, Radio Fórmula, Radio Iberoamericana, even outside mexico city, have begun to make informative capsules to educate and instruct the audience and know that HD radio is already there. "We know that any technological change takes time and education is fundamental to reach a critical mass, so we believe that working with the industry is important for them to educate their own audience," said Claudio Martínez.

He added that HD radio does not have a date to have 100% of the country in this technology. As analog and digital radio occupy the same spectrum, it can operate in a hybrid way and there is no need to put pressure on the population, broadcasters and the government with a deadline. It allows flexibility for a gradual transition, with a more organized and coordinated migration at the country level.

Finally, Miguel Fenández concluded that "the listener will always be the beneficiary of digital radio. Listeners of the Imer stations have had a slow but increasing advance, as they identify the technology, become more interested and seek to acquire a digital receiver. I believe that in a short time we will have a massification of digital radio, the process is slow as it was with the arrival of FM radio."

No thoughts on “In Mexico, HD radio advances”