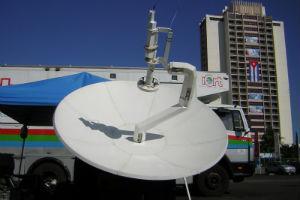 Both production and audiovisual transmission have undergone great changes in recent times. Some of the most significant are satellite transmission and production outside recording studios.

by María Cecilia Hernández
Mobility, portability and connectivity are words that are needed, demanded and used a lot these days. In the audiovisual production and transmission industry, the same thing happens.

Every day satellite television is positioned with greater force, global access to all kinds of information and, on the other hand, it is more common for the public to demand more content outside the studio, more street, more people.

The audiovisual market is migrating towards technological implementation and not only in terms of results, with finished products, but also with processes, equipment and production formats and transmission systems.

Television production and transmission are two different processes and, in some cases, independent of each other. TV and VIDEO consulted with some experts about the latest trends that have been implemented in these two stages of the television industry.

Issues such as freedom of movement and satellite technology shine as the global trend in this market.

"You have to differentiate very well two elements: one thing is a mobile unit of audiovisual production, which is a vehicle on which a whole system is installed to record and edit a television program outdoors and, eventually, transmit it; and another thing is the equipment that serves to transmit that program to the air, which may or may not be incorporated into the mobile unit. One of them is the Fly Away antenna, which works in a satellite way," explained Carlos Iván Fernández, manager of Seel S.A.

In both matters, technology has advanced by leaps and bounds. The evolution in hardware and software, in support and storage systems, in portability and in general in everything that offers operational comfort, maximum quality of results, increased production capacity and greater geographical coverage. But let's go in parts.

Produce HD from a cart
The most significant advance in audiovisual production has to do with the High Definition (HD) format, which, obviously, was adopted by mobile production. With this change came others that brought great advantages both in the processes and in the results.

For Fernández among the changes that the exercise of mobile audiovisual production has suffered, it can be said that one of the most important has occurred in the human issue and that is that the staff has had to be trained to operate the equipment and offer qualified results.

The expert mentioned that in what has to do with storage or engraving systems, evolution has been perhaps one of the most revolutionary in the industry, since it went from recording on tape with very large cassettes, with all the disadvantages and dangers that this entailed, such as occupying a lot of physical space, poor reusability, sensitivity to information loss, deterioration of quality, among other issues; to burn to memory cards, hard drives and solid storage.

"Although the change is especially noticeable in the final result, that is, in what the viewer sees, these advances have helped us a lot to improve the design and distribution of the equipment, optimizing the workspaces within the mobile unit since the equipment is now much smaller," said the manager of Seel.

The same thing happened when the flat monitoring systems jumped on the scene: LED, LCD, plasma, etc.  Well, the traditional monitors, that is, the belly ones, were much larger and bulkier. "Every millimeter we can gain is critical in factors such as comfort, productivity and even adding someone else to the workflow," Fernandez said.


To protect is to guarantee shelf life
A standard mobile audiovisual production unit, of medium capacity, designed and manufactured in Latin America, has a value ranging from US$800,000 to US$1.2 million. This cost is higher in Europe or the United States. It can weigh approximately six to eight tons and have between two and four air conditioning units, sometimes more.

The most important thing is to know in advance what the mobile unit is going to be used for, based on this information a design is made that will work only for that purpose.

However, a basic system includes the vehicle, which can be anything from a large truck to a van or taxi;  four cameras to produce dramatized; all the adaptation of the vehicle, stairs to climb, air conditioning, thermal insulation, racks, wiring, swicher, audio console, monitors, routing, dies, intercom, etc.

It is advisable that there is a technician responsible for maintenance, installation and recognize the design to do the preventive maintenance of the equipment and mechanical maintenance of the vehicle, "although they are cars that do not suffer much because they are mounted on chassis whose load capacity is greater and does not have suspension problems, they are vehicles that normally do not do much mileage because most of the time they are parked, "said the businessman.

The need for mobile television production units is present in all countries of the world, but there are very few companies that are dedicated to designing and manufacturing them and sometimes the export is difficult due to the regulations of each country in terms of bearing, load capacity, etc.

Therefore, most industries solve their production problems on their own. Sometimes TV channels turn to their own engineer to design and manufacture a local solution. The result is a low-skilled mobile unit that will likely fail at some point or not have the desired range.

Fly away, positioning itself
Another area of the audiovisual industry that has undergone drastic changes is television broadcasting. One of the most obvious and, by the way, demanded, is the satellite service.

Satellite television transmission via Fly Away antennas is here to stay and evolve. Countries that do not yet have their own satellite rent their space and companies acquire their own antennas to be able to transmit. This is, according to some experts, one of the most used systems in Latin America.

As indicated by Juan A. Martínez, president of the company Taurus Telelecommunications Inc., in Latin America there are a good number of companies that have acquired this type of equipment, mostly television channels that are self-sufficient, but there are few companies that offer the transmission service. The existing ones travel throughout the continent and cover the entire regional market.

In the same way, José Cadavieco, representative of the Video Carrillo Corporation, said that in his country (Venezuela) the market is slow but well received:

"Despite the fact that the Venezuelan market is extremely slow, due in part to the restrictions of the import and exchange control mechanisms and the passive attitude of the broadcasters, there are a good number of Fly Away antennas, mainly belonging to the stations of the national system of public media, which are owned by the State, and a few in regional stations and service providers."

Innovation for quality
"The novelties that are presented in this market are in the issue of modulation, until recently we worked with the QPSK (Quadrature Phase-Shift Keying) and now we move to work with the 8PSK modulation that allows greater data transmission, more possibilities of error correction, some equipment not only bring ACI inputs for coaxial cables that is the traditional, but also IP inputs," said Istvan Herrera, a support engineer at AVcom.

In the subject of transmission is using the DVB-S2 standard that has several improvements over its previous version, one of the most significant is that it brings the roll-off factor that affects the digital filters that the equipment has and allows to save bandwidth.

Another fundamental change has to do with the type of encoding: "The Mpeg4 standard is coming that allows transmitting more easily, the disadvantage is that the compression is very strong and this can generate delay problems and in case the signal is going to be edited it may be difficult to recover the original signal to do frame-by-frame editing", Herrera explained.

The engineer also mentioned that in what has to do with amplifiers, it went from using tube technology (twt) to using solid-state amplifiers, which increasingly offer more power and are more compact.

While quality should be one of the biggest motivations for constantly updating equipment with the latest technology, there is a bigger and more tempting motivation: savings, even in the medium term.

According to Istvan Herrera, the advances that have been made in the field of Fly Away systems are accompanied by this important consequence: "Savings in monthly rent of the space segment. That is, in satellite bandwidth rental. If a company uses a certain bandwidth with a certain frequency, for example 9Mhz, it may be that with this new technology it does not need 9Mhz but 7Mhz. This translates into saving around 20% or 30% of consumption and after a year you could be recovering the cost of the equipment."

No thoughts on “Mobility and coverage, the trend”