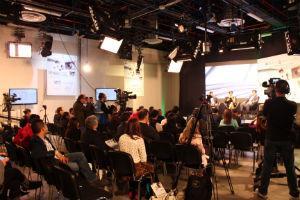 TV Morfosis was held for the second time in Colombia, as part of the commemoration of the 60th anniversary of television in the country. It was stressed that public TV does not have to be boring or low-rated.


An interesting reflection on the role of public, educational and cultural television in the coming years was made on TV Morfosis, a format of the University of Guadalajara that for its second version in Colombia was carried out with the support of the Zoom Channel.

Some of the main conclusions of the different forums had to do with this type of television and its little interest in ratings. Likewise, a call was made for a joint work between the channels of different countries to generate collaborative television of international stature, taking advantage of the fact that only these channels can give themselves the privilege of not having to think about marketing their contents.

Hearings evaluate the work
Unlike private channels, public and university television has its financing guaranteed. This situation has historically generated a certain tranquility in the channels, since most have not been concerned with the rating, to measure the audiences, only in generating content and filling a grid.

The Spanish Julio Cabrero, member of the Board of Directors of the Association of Educational and Cultural Televisions of Ibero-America, said that "university and public TV must be different from commercial through language, therefore it must be measured differently, because it is not looking to fight for audiences but for citizenship formation."

In the same sense, Gabriel Torres, director of the radio and television system of the University of Guadalajara, said that public TV should not be based on traditional measurements, it should also look for how commented its contents are on social networks. "You shouldn't think that measurement is a thing of capitalism. We must analyze the impact of content on society, attend to programming schedules to generate more audience."

In this sense, the National Television Authority of Colombia is working on a project that seeks ways of measuring based on qualitative analysis for regional channels. As an ANTV Commissioner Alexandra Falla highlighted, "public TV must be done to be seen."

A purposeful TV
What is the way forward for public and university TV? On the role of university TV, Julio Cabrero said that it must play a much more important role in the innovation and development of new formats, seek an audience not only in university students, but also citizens in general, acquire presence and recognition in society.

"The content of university television must go beyond lectures and master classes. It must have an attractive content for the viewer, which captivates him, promoting media literacy. It must promote creative TV professionals who generate new languages, aesthetics and formats," said Julio Cabrero.

For his part, Germán Franco, deputy director of the Centro Atico of the Pontificia Universidad Javeriana, stressed that "the purpose of universities in the education of new professionals for TV is not the medium. It is to generate narrative capacity, to tell stories, a task that is clouded with technological wonder as happened with cinema, which took 30 years to understand that the projector was not important but the story. "

University television has been growing considerably in the region. In the case of Mexico, during the last ten years it went from having two channels to 13 today. In Brazil they are over forty and in Colombia there are two channels. For this reason, Germán Franco insisted on the need to generate content collaboratively between university channels.

"Precisely, within the framework of TV Morfosis Colombia, we have just closed an agreement to make a series of 16 chapters between channels from four countries in which the gastronomic customs of each country will be addressed. Each channel will produce four chapters, so we will have an international content  project with experiences from Mexico, Colombia, Argentina and Brazil. This is just one example of everything that can be done with collaborative television."


On collaborative television, Gabriel Torres indicated that, taking advantage of the event in Colombia, they achieved interesting agreements to produce and present content between public channels. "In my suitcase I take a series about Latin American presidents produced in Colombia and that has not been passed in Mexico, and I left them a series about tequila. So we are building a close relationship that will grow."

DTT and new media
Another challenge for public and university television has to do with the implementation of digital television, which is in process in Latin America and the new media and ways of consuming audiovisual productions that the internet has generated.

In this regard, Purificación Carpinteyro, federal deputy of the Chamber of Deputies of Mexico and one of the most dedicated researchers on the subject of telecommunications in her country, said that "public TV channels have to be more interesting, especially now when the multiplexing of channels with digital television comes."

In the case of Colombia, in 2013 the first digital television transmitters for public TV began to be installed. Diana Celis, director of RTVC, explained that in 2015 the third phase will be carried out, which includes the installation of 17 digital TV stations, with which 80% of the Colombian territory will be covered. "The remaining 20% are the remote areas of the country, which will be covered with satellite television, because with DTT it would be very expensive."

When asked about access to decoders for people with low economic resources, Diana Celis said that in Colombia they are being studied how they could be subsidized, since the legislation would force that if they are given away, as has been witnessed in countries such as Venezuela and Argentina, they would be owned by the State and would have to be supervised and renewed from time to time.

The change in the role of viewers must have an impact on public TV that today has not been analyzed or applied. Germán Franco, commented that "before they were readers, listeners, spectators, and viewers. All passive actors. Today we should no longer talk about audiences. The internet and social networks generated a change that must be studied and taken advantage of. Universities have the unfinished business of understanding the new ways of relating to the community and the media."

The also commissioner of the ANTV, Beatriz Quiñones, stressed that public TV must define the viewer as what it is today, an active actor and generate new forms of participation. "The citizen gives lessons to investigate and regulate. Today they warn about the contents in cases that need to be analyzed. The citizen thinks, believes, points out, and we all have to take advantage of that."

Several of the guests at TV Morfosis, commented that public television should produce programs thinking about including topics such as the second screen, accessibility, active viewers. And from universities, there must be an empowerment of students to think about how they like TV for the coming years.

Germán Franco concluded that "New media generated and strengthened storytelling, such as web series. In Colombia there are more and more stories, so there must be alliances between universities, channels, producers, creators and the State. The new public television must have cooperative production, stories that reflect that they are of people for people and not for advertisers, strengthening from the State and moving from the academy new ways of telling stories, new formats. "

TV Morfosis is taken Ibero-America
Gabriel Torres, director of the TV Morfosis format, commented that in this second edition in Colombia he had no problem for the production of the 11 programs because it was made in the Atico Center, which had all the necessary technology to provide the production of the program and the interaction with social networks.

He mentioned that "The format has been successfully internationalized. Today we have made four versions in Guadalajara, two in Colombia, in October comes the first version in Brazil and next year we arrive in Argentina. And we are also in talks to take it to Seville in Spain. This makes it a truly international travelling event from the perspective of the guests and the space in which it takes place."

No thoughts on “Public TV must think about ratings”