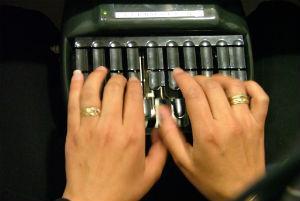 Although its main function is to help people who are hearing impaired, closed caption has other functions. Here are nine points about this system.

1. Not only for people who are deaf or hard of hearing

Closed caption is the technology developed to allow people who are deaf or hard of hearing to understand what is said in a television program or in a more general way, to access audiovisual content.

But closed caption has proven to be very useful, not only for people with hearing impairments, but also for people in the process of learning to read their mother tongue or a second language. Additionally, it is useful in situations where there is a lot of noise and you want the audience present to access certain information.

An important feature in the definition of closed caption systems is that the user has the possibility to activate and deactivate the service.

The NTSC system displays approximately 30 frames of video per second (fps). Each frame is divided into lines and each line into pixels. The first 21 lines of each frame correspond to what is known as the VBI or Vertical Blanking Interval. These lines are not visible on TV screens.

These lines contain information for different purposes, the most important of which is the synchronization of frames. Line 21 is the one used to send the closed caption information.

As in the NTSC system, the signal is interlaced, there are two 21 lines, one in each field, so two sets of data or characters can be sent. The signal on line 21, field 2, corresponds to line 284. Each of these fields form two independent streams of information in the TV signal, from which the four channels of cCaption, known as CC1, CC2, CC3 and CC4, are formed.

Closed caption for digital television (DTVCC) can be carried in different ways, but the most common is through the use of the SMPTE-334-1 standard, which defines a method of embedding DTVCC and other data services in the auxiliary  vertical space (VANC) of SDI and HD-SDI signals.

4. In digital television you can send more information of closed caption

5. How does the viewer receive the closed caption on the TV?

In the past, when the entire production and distribution chain was basically analogous, it was enough to ensure that the NTSC signal passed from the source to the TV, keeping line 21 intact. The TV is responsible for "decoding" the information of line 21 and showing it to the viewer, when he activated the corresponding function.

Today, with a mix of digital and analog signals, the situation is more complex. If the signal is sent over the air, it is the TV that is in charge of "decoding" the closed caption and showing it to the viewer.

However, when the signal is sent through cable or   satellite distributors, additional difficulties arise. The STB will be able to recode the information of closed caption CEA-608 directly on line 21 and send this signal to the TV, who will be responsible for decoding and showing the user the text.

For DTVCC signals, the TV will receive the video from the STB, only the captions can be decoded by the STB itself or by the TV.  An additional problem arises with the connection between the STB and the TV. Currently, to make the best use of the quality of high definition (HD) signals , the HDMI connection is used.

This type of connection does not allow the passage of closed caption information, so if this is the case, it is required that it is the STB that decodes the caption and includes it in the video signal it sends to the TV.

All these situations make this a subject difficult for the end user to understand, which entails additional obstacles to the use of this type of services.

Although there are more and more aids for the insertion of closed caption to a television program, this is still a process with a high component and human intervention.

In the case of programming that is broadcast live, such as newscasts, magazines, etc., the production of closed caption requires: a CC encoder that inserts the text into the video signal, a software that allows the text to be sent to the encoder in real time and a way to convert the audio into text. This last aspect is the one that entails the most difficulties.

There are two main ways to convert audio to text: using speech recognition (SRV) software or using a stenograph. SRV requires a trained operator to repeat the program's audio in real time. In addition to repeating, and for the viewer to understand what they read, the operator requires inserting punctuation marks and character identification.

The stenography or stenotype system requires a trained operator who writes in real time on a machine, the stenographer. The best trained stenographers can write between 150 and 180 words per minute, with accuracies greater than 95%. The training time to achieve these speeds is more than 18 months.

With the SRV, results are also produced greater than 150 words per minute with accuracies between   85% and 90%. A person's training to use an SRV and produce acceptable results is between two and three months.

7. Importance of closed caption made for pre-recorded programming

Producing good quality CC for pre-recorded programming, involves taking into account among others, the following characteristics: good spelling, character identification, sound description, synchronization, transcription of audio into text, conversion of HD to SD and vice versa, etc.  All this makes inserting CC to an hour of programming takes between six to eight hours of work.

For today's digital workflows, it is also necessary to take into account the editing systems used, the broadcast servers used, the format of the files, and so on. When selecting a CC software, it must be taken into account that it is capable of handling the workflows and formats used to have a tapeless CC production .

Inserting CC with these characteristics involves production time and costs. This means that tv channels often want to produce the CC of pre-recorded programs, using the workflow of live programming. However, doing this means that the primary objective of making television programming accessible to people with hearing disabilities is not met, as the delay, the little or no identification of characters in programs such as novels and serials, the non-inclusion of sound  effects and the lack of other features that are lost in the live workflow, they do not allow an adequate understanding of the contents.

8. Other considerations when producing closed caption

Although the equipment for the production of closed caption does not have a very high  cost compared to others used in television production, a large component of labor is required, and this staff for live programming requires training that in many cases is greater than two years.

There are not enough trained personnel in performing closed caption.

9. Outsourcing of the service

Hiring an external company to provide this service has several benefits for TV channels:
Better quality service, as this is the core of your business
Permanence of the independent service of holidays or illnesses of the plant  staff
Versatility in schedules and programming to which the service  is provided
Provision of the service with the best technologies available in the market
Less impact on the production processes of the channel
Ease in the increase or reduction of programming to which the closed caption  is inserted
Reduction of operational burdens in terms of specialized personnel required
Minimization of acquisition of high depreciation assets by the channel
No major investments related to the acquisition, installation and training of new technological platforms are required.

*Luis Guillermo Torres  is president and founder of the company Atmedios. What you should know about closed caption

No thoughts on “What you should know about closed caption”