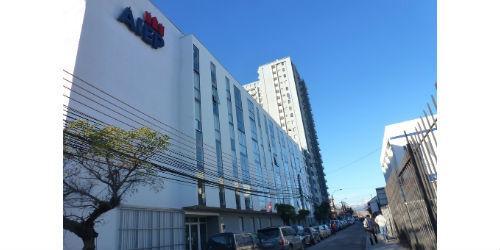 An automation system was installed in the university station of the Professional Institute AIEP, which has offices in 16 cities in Chile.

Coinciding with the 50th anniversary of the creation of the Professional Institute of the Andrés Bello University in Chile, the technical management has proposed an ambitious program of modernization of its teaching facilities. Within this development plan they included the University Radio project, the School of Sound, Television and Locution, of the AIEP Professional Institute, located in Santiago.

In this place a complete network of radio automation system called AudioPlus, from the company AEQ, has been installed. It is a network with 5 AEQ AudioPLUS clients in 4 different locations, each of them communicates with the central server in charge of management and configuration, hosted in the Institutional Data Center of the University.

AEQ AudioPLUS brings AEQ technology in computer broadcasting systems to those radio stations that professional automation has not yet been able to reach.

The installed technology
Based on the Mar4Suite systems installed in thousands of high- and medium-level studios, in networks of up to hundreds of stations, a product has been developed aimed at most radio studios, in autonomous stations or in chains with few seats per station.

AEQ AudioPlus offers new features, adapted to the real needs, technical skills and purchasing power of most stations. It incorporates tools for manual, automatic and telecommanded broadcasting, automatic programming of music and advertising, as well as generation and editing of content.

Unlike other moderate cost applications, this tool for small and medium seasons has the power and quality of the best. Designed for Windows operating systems and SQL Server databases, AEQ AudioPLUS has a simple self-installation wizard, supports low-cost audio cards, and complementary editing and management tools.

AEIP's AudioPLUS systems are already operating normally coinciding with the start of the Sound and Voiceover courses, and it is expected to start the white march of the radio signal via the internet by the beginning of the summer.

The entire project has been led by Rafael Franca as head of systems of AIEP, in collaboration with the technical department of Intervideo Chile and the staff of AEQ in Madrid, where the training and training workshops for the administrators and installers of the system were given.

The beneficiary institute
AIEP is an institution of professional technical higher education that provides access to quality technical training aimed at a rapid and successful incorporation into the world of work, which has more than 40 thousand graduates.

It was founded in 1965 in order to deliver top-notch technical education. In 2001, in order to improve the professional training it provides to its students, AIEP joined the Andrés Bello University. In 2003, AIEP became part of the Laureate educational network, a global network of higher education institutions that today totals more than 80 institutions in 29 countries.

Since the foundation of AIEP until today, it has forged a House of Studies of Higher Education of excellence, with presence in the 16 most important cities of Chile: Calama, Antofagasta, La Serena, San Felipe, Viña del Mar, Valparaíso, Rancagua, San Fernando, Curicó, Talca, Concepción, Los Angeles, Temuco, Osorno, Puerto Montt and Santiago. The latter, with five venues.