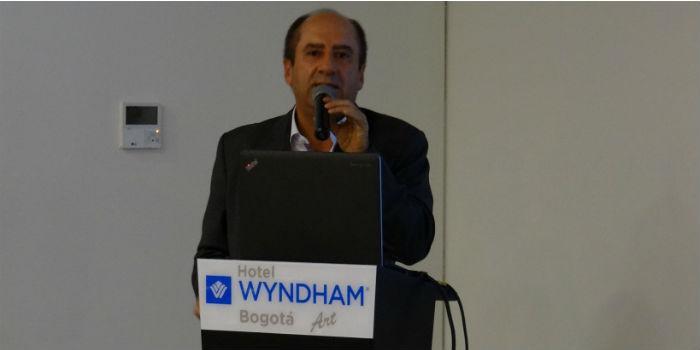 Blu Radio is the newest station chain operating in Colombia today. Its first broadcast was made in September 2012 and since that time it has not stopped growing in audience with local stations and a strong presence in digital channels.

As assured by the manager of the chain, Carlos Arturo Gallego, the advantage of Blu Radio is that it was born in the XXI Century, in the digital era, so from day one it has a large digital structure, they are non-traditional and like to break paradigms.

Another advantage of being born in the XXI Century is that Blu Radio is IP. The arrays, the consoles, the whole workflow and until the signal is emitted is in IP. The only thing they have analog is FM transmission. And this is possible thanks to the fact that in Colombia there is very good internet penetration and coverage. In other countries in the region, where things are different, they have many problems when it comes to making special broadcasts.

Although the structure of the digital area of the station is large and growing, it is still unprofitable, monetization is a pending issue. Its manager explained that digital is a mandatory area for any medium and to which they have given a lot of space. Since they started, digital was the protagonist and that is why they took a lot of advantage of the competition.

Blu Radio is part of Caracol TV, a media conglomerate that also has a television channel and newspaper, all gathered in the same headquarters. This represents a significant benefit, because its team of five engineers who support the operation of the station, led by Beatriz González, can count on technical and human resources with extensive experience in IT and TV to be able to make ideas a reality.

La Kalle, hybrid of radio and TV
One of those ideas, which took a lot of time and effort from work teams from different areas to become a reality, was La Kalle. This is a Blu Radio project that brings together all the experience of the media group to which it belongs: television, radio and the digital world.

Carlos Arturo Gallego stressed that "What we did with La Kalle was a mixture that cannot be fitted into any medium. It goes to the rhythm of the radio that is much faster, but with the quality of the video that television demands and is broadcast by DTT. And it's also digital because it's streamed under its own platform."

The transmission of La Kalle through all its channels, shares at the same time the same content. To achieve this, they made a technological integration in which the manufacturers were linked and that today allows radio and television systems to be spoken, that the radio console gives orders to the television console. The entire project took a year and just doing the communication between the two teams took almost five months.

In addition, they have a small studio in which there are two fixed scenarios and one with chroma key that has allowed them to play and acquire a great experience in this field. The lighting of this studio was a challenge because they had to place all the lights in a small space. For the presenters there are costumes, they put on makeup, television production is done.

New developments in radio
For Carlos Arturo Gallego, DAB and HD radio in Colombia is almost impossible, because commercial radio is very strong and there was no legislation about it. That's why streaming came along and surpassed them all.

On the case of Norway, he said that FM radio was turned off because it is a very small country where public radio is the one that decides. The case of Spain is the clearest, they have DAB for 12 years and nothing happens, the big chains continue to broadcast on DAB and FM.

Finally, he pointed out that "radio continues to be a protagonist, especially in Colombia where it is an industry, which stands out among many countries. Today with all the changes radio is not for everyone. Radio must be multimedia, it must have financial muscle and know-how to be able to do it."

No thoughts on “Radio continues to be the protagonist”