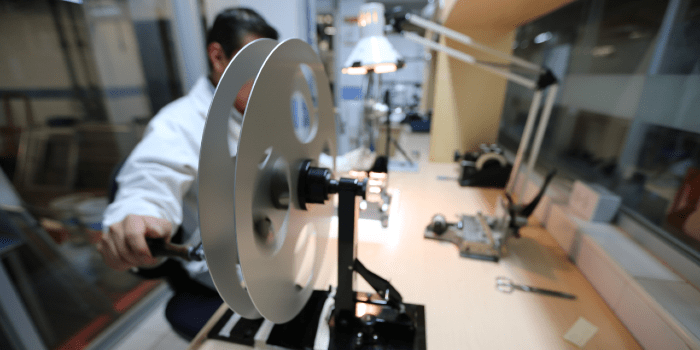 The current landscape of film photochemical laboratories is different because digital technology altered the way a film is made.

For more than a hundred years, production and film experience has used the work of thousands of people who rarely appear among the credits: photochemical laboratory workers. His work is one of the most historical and linked to the essence of cinema. From the chronophotography of Étienne Jules Marey, to the film developed together with George Eastman for Edison's kinetoscope, chemical work was required to reveal the latent image of an exposed film.

Cinema was the result of the combination of different optical and photochemical technologies available in the nineteenth century, such as photography (1830), negative capture and positive printing (1880), roll film (1850), cellulose (1868), high sensitivity emulsions (1880) and projection (1645), which opened the way to an international process of innovation that resulted in an industry that spread faster than that of the engine. of steam and the locomotive.

Technological developments for filmmaking and reproduction, as well as the standardization of supports, opened the doors to an explosion of production, and the beginning of film distribution as a key element in the industry. The total negative produced in the United States increased from 38,000 feet in 1897 to two million feet in 1910 and to 20 million in 1920, production that grew exponentially in the twentieth century.

In those years Mexican cinema catapulted thanks to the private investment of groups of producers, who formed what at that time were the most important studios in Latin America, such as: Estudios Clasa, Tepeyac, América, Azteca and San Ángel. Subsequently, the government decided to be part of the industry by building and financing the Churubusco studios.

Between the 40s and 50s, Mexico was the third largest film industry in the world thanks to the increase in public and private investment. The studios pushed for a mass production of films that were processed within their own photochemical laboratories. Likewise, in Mexico, laboratories independent of large studios emerged to meet the demand for photochemical processes in terms of the volume of copies for exhibition.

The current landscape of film photochemical laboratories is different because digital technology altered the way a film is made. Moving image processing is a chemical, technical and mechanical task that involves a variety of highly specialized processes. The change in production and distribution methods diminished the use of film material and, although the film in recent years gained strength within production, the work that is done behind the scenes remains a mystery to many.

The distribution and production of classic cinema, that is, based on film material, will not return to what it was before. This is because advances in film distribution through DCPs make generating film copies for distribution an unnecessary expense. Today most rooms no longer have analog projectors or projectionists trained in the handling of film.

Labo emerged in the 60s as a film laboratory dedicated to the processing of 16mm and is currently one of the few private laboratories in the world. The distribution of copies was what drove the growth of the laboratory.

In the 80s, Labo opted to invest in positive equipment – which at that time was a less profitable option compared to the development of negatives – service used by Mexican productions, which dominated the national photochemical market. This choice was based on the conviction that the exhibition screens would multiply in the country, which turned out to be a wise decision, since Mexico is currently one of the markets that consumes the most cinema.

The laboratory began to capture most of the material from the United States, which arrived in Mexico with the need for large quantities of copies to be made for distribution. In addition, U.S. distributors needed the service of making positive composite copies with stereo optical sound and subtitling.

One of the laboratories that was able to meet this demand was Labo, since it had the equipment, trained personnel and technological resources to do so. Investment in large developers and printers allowed up to two million feet to be processed daily in a 24/7 operation.

Several of the technicians in the laboratory, like me, lived in that time and have specialized in this work over the years. Putting copiers or developers to work, knowing how they work and reacting to a failure, is not something that is learned overnight. Darkroom work is a blind trade where high-value fragile materials and equipment with complex adjustments are handled.

The ways of working, the techniques and standards to carry out a process as delicate as the handling, processing and duplication of films carry with them an enormous responsibility for the direct manipulation of film material. Mishandling can result in the loss of photosensitive material that is unrepeatable.

Labo's personal preparation follows strict parameters with the aim of ensuring the quality of the copies, doing chemical tests, visual inspections and densitometry, detecting, determining and anticipating possible failures within the process. Workers are highly trained to determine if the material is suitable for duplication, projection or storage.

Specialized technicians carry out controlled variations during the development process, such as push/pull or bleach bypass, which physically affect the image. These processes have fallen into disuse by digital color correction and editing tools. The team is qualified to recover ancient film material for preservation and restoration.

Changes in the film industry have led some laboratories to reduce their operational capacity, since the operational capacity that was previously had is too much for the demand for current photochemical processes. In this context, Labo donated some of his equipment to the film library of the National Autonomous University of Mexico (UNAM) to continue teaching these processes.

Undoubtedly, cinema is an art linked from its inception to technological development. Current methods for film production and reproduction opened up the possibility of capturing and sharing moving images that a hundred years ago were unimaginable. But in a digital present where technology is advancing by leaps and bounds, we must take the time to recognize the work and advances that led us to where we are today. To maintain knowledge of classic film processes is to keep cinema alive. Run Movie!

*Javier Puentes, manager of film processes at Labo. He has 17 years of experience in the handling of celluloid and film materials. He joined Labo in 2002 as a printer in the production of photosensitive material. Later he was in charge of all the operational teams of the laboratory and was a key element for the transition from Labofilms to Labodigital where he led the creation, operation and documentation of the mastering area. He is a specialist in film and digital dailies, duplicates and Piql, operational methodology for digital preservation processes.

No thoughts on “Current panorama of a photochemical laboratory”