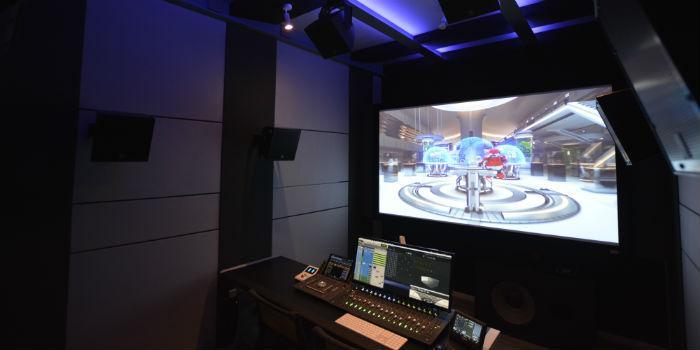 Dolby Atmos has been the best-positioned audio super-format in the industry. Unlike the standard 5.1 and 7.1 system, this one provides more dynamic range in surround.

The production of audiovisual art and entertainment under high quality standards has been determined by the demands and needs of directors, producers and studios. It is they who have encouraged the development of both new ways of expressing emotion and the application of new technologies that allow a precise approach to realism.

It is not only about telling a story, but about feeling it and expressing it in the greatest detail and characteristics of our time: high-resolution audio, surround and immersive sound, high audiovisual dynamic range, extended spectra and complex one-shot sequences, to mention just a few examples.

Audio production has become an important point of attention, and one of the greatest ambitions of the new generations: to contribute with their talent to the generation of content. Today the challenge we face in this area is to capture art and production at high speed and with precision, and to achieve this with current technology one element is needed: state-of-the-art infrastructure.

The production of audio in audiovisual content is defined according to the type of industry to which it belongs (cinema, streaming, home-video, broadcast, video games, etc.), since each of these has specific demands and requirements. Therein lies the importance of mastering, that is, finishing the content to preserve the same level of accuracy of the work regardless of the industry or format for which it is intended.

Any high-precision system that aims to represent a signal needs to be calibrated. Just as musicians tune their instruments prior to their performance, the response of the sound system frequencies per channel, the sound pressure, the arrival time and the transient must also be calibrated to meet international standards. This calibration work under international standards is as fundamental as tuning a Steinwey Piano, because it is at this point that critical decisions are made to shape the sound art of each content.

That is why in Labo we have adopted the ISO calendar for the Region of Mexico, with which our studies are audited, reviewed and calibrated every six months by the Acoustics Worksolution Group (AWG), a company that has the most rigorous and sophisticated credentials to represent THX in Latin America.

THX is the most prestigious certification in the world for a cinema, as it guarantees that it has all the acoustic requirements, sound system, construction, air conditioning and isotopic. The THX rooms (concept promoted by George Lucas and created by the engineer Tomlinson Holman in the Skywalker Sound) have become a reference and ideal place to review, mix and master theatrical content and original series for the different platforms that exist today.

On the other hand, Dolby Atmos has been the best positioned audio super-format in the industry. Unlike the standard 5.1 and 7.1 system, it provides more headroom (dynamic range in surround), evolves the spectrum of the channels through its bass management (with which it is possible to listen to the full spectrum of the surround channels) and offers a new dimension to be able to "pan" sounds above (top surround) which creates a more immersive feeling than the traditional surround system.

The Atmos room in Labo will allow us to work on projects with this type of format, as well as observe and listen to more than 100 automated objects in the three dimensions. An experience that deeply inspires both us and each of the clients with whom we collaborate.

In Labo, an audiovisual services company with a presence in Latin America, we have both qualified and sensitive personnel as well as multi-format technology and infrastructure (Stereo, 5.1, 7.1, VR, Atmos) and multi-industry (Theatrical, Streaming, Home-Video, Broadcast and Games). From independent cinema to original series and high-profile films, we have managed to bring our experience and talent to the benefit of art and visual entertainment.

*Víctor Romero is an audio and music production engineer. He serves as operational supervisor of the dubbing area at Labo Digital. with more than 10 years of experience, he has experience in the execution of different technical processes such as recording, editing and mixing dubbing for film and television.

*Onofre Ortega is one of the nine worldwide representatives of THX technology. He has specialized in acoustic design and worked as a consultant at Dolby Laboratories. Throughout his career he has developed more than 165 professional venues in which dubbing, voice-over and post-production are carried out, among others. He has been independently mixing sound for national and international content for 12 years.