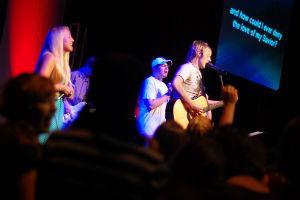 Churches and religious cults are using professional television production and broadcasting systems to get their message out to more people. New business opportunities for distributors and manufacturers.

The intention of making the systems and equipment for television production easy to use, as well as the options offered by the Internet for the distribution of content that can be accessed from anywhere in the world, are situations that have allowed the emergence of thematic channels and with a number of followers growing day by day.

Religious communities have become one of the main users of television through the Internet, seeking to meet the goal of their message reaching more and more people, either with live or on-demand content. Hand in hand with these channels, they have had an important growth in the number of followers, both in their country of origin and around the world.

Churches of all sizes and of all faiths are interested in implementing audiovisual systems. There are cases in which churches physically have a small enclosure or even do not have a fixed headquarters and for their meetings they rent a hall, but they are virtually giants thanks to the number of followers. It all depends on the use they give to technology.

José Enrique Rojano, manager of AVTech Ltda, a company that has been working in recent years on technological integration for churches, commented that professional production and streaming solutions allow churches to measure how many people access content, how long they are watching on average, from which places, and with this information they can draw strategies to gain followers around the world.

The use of professional video systems in churches began in the United States. Thanks to these examples and the results achieved, the churches of Latin America have been adapting these solutions and companies dedicated to audiovisual integration for this specific niche in the region have emerged.

Formed ten years ago in the city of Manizales, Colombia, the María Mediadora Community is an example of religious groups that carry out audiovisual production. It is a community that promotes the values of the Catholic Church through seminaries and conferences. William Zuluaga says that to get more out of each of his events, a little more than five years ago they began recording them in order to repeat the videos in other meetings.

Initially, the idea was to create a television channel to disseminate the activities carried out by the Community, but when evaluating this option, they gave up because of the high cost involved and the short scope it would have.

"I started this project, as a way to put the things we have more affordable, recognizing the value of our work and that should be available to many more people. Looking for how to do it, we came to the conclusion that the best tools were from audiovisual production, television broadcasting and taking advantage of current trends in the medium, "said William Zuluaga.

In those first experiences the quality and diffusion were not very good. They began to explore production options that would allow them to improve both aspects, for which they acquired different systems until they reached the Tricaster, with which they met the needs they had at the time, began live broadcasts their events and the production of more elaborate content.

The evolution of its audiovisual production and the acceptance of the followers, has led the María Mediadora Community to have a constant training and technological update, in addition to increasing its production capacity. Therefore, they have two content production sites in two different cities, Pereira and Manizales, and are working on the adaptation of a mobile that allows them to record their events in other locations.

Each of its two production centers has as its central system a Tricaster and for its mobile they are in the process of acquiring another. They also have three professional cameras, audio and lighting systems to produce all the content in HD. And as part of the constant update, they are starting to work with PTZ cameras for the recording of events, taking advantage of the fact that they can be handled remotely and can perform IP transmission.

To produce the contents they have a group of six people divided into independent areas, between cameras, audio and the operation of the Tricaster. William Zuluaga emphasizes that this staff constantly seeks to be updated in trends and technologies.

"The intention of a church is that its content, evagelization, preaching, can reach more people and fulfill its mission. The Tricaster allows churches to do their work within the enclosure and transcend. As a curious case, when Newtek launched the system, they considered that the market niches could be educational institutions and churches, thanks to the production facilities and streaming possibilities, "said José Enrique Rojano.

There are some particular cases in the technical staff that operates the equipment and is in charge of the audiovisual production in the churches. As part of their mission, church members give offerings, which can be inexpensive or in service. In some churches the production managers are professionals who work in television channels and donate their time, so the video material is of very good quality, because they do it with dedication, with passion, attending to their faith, putting all their experience and making a great production department.

There are many churches and religious communities that are making use of internet channels to grow locally and regionally. In the specific case of Latin America, Peru and Colombia are some of the countries where they have had the most growth. The common denominator is that they start by uploading the contents through Youtube, but quickly develop their own video platforms.

In addition to its website, the distribution of content of the Maria Mediatrix Community is done through a decoder, from which they can access all the content directly. The servers they have have the capacity to support up to 3,000 connected set-top boxes. Although there are also households that have acquired the decoder, the main use is in the communities and parishes that broadcast the contents for groups.

Today, thanks to its internet channel, the Community has managed to cross borders. It has a direct presence in Mexico and a large number of followers in the United States. Among the followers of their content they have registered connections from 33 countries on five continents.

José Enrique Rojano pointed out that churches also have internal distribution needs, because they are implementing screens within their enclosures to make their meetings, liturgies or services more attractive. "To meet these needs, Newtek developed two additional systems that facilitate the distribution of content on screens and be able, for example, to put biblical texts while preaching the priest or pastor. And both systems can be integrated into the audiovisual production of the event."

Undoubtedly, these internet channels also become new business opportunities for manufacturers and distributors in the television industry, because they always want to have a higher quality and capacity in the products they offer.

In this regard, the Manager of AVTech Ltda concluded that the channels begin with a basic production system, but as they grow and generate more content, they will demand better equipment that supports greater production, storage systems and transmission in different languages simultaneously. They even seek to upload their contents to the satellite to distribute them in pay television services.

No thoughts on “Increased TV production in churches”