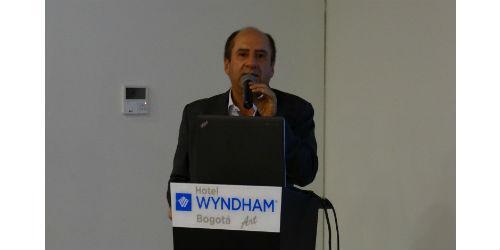 Carlos Arturo Gallego pointed out some aspects of how to face the challenges of twenty-first century radio, taking advantage of the digital landscape and having human talent hand in hand to achieve good content.

One of the most outstanding conferences of the 2015 version of TecnoTelevisión&Radio was the one that had as a speaker Carlos Arturo Gallego, Vice President of Radio at Caracol Televisión, who is in charge of the Blu Radio station. In his presentation he invited the attendees to the show dedicated to this industry to reimagine the way in which radio is made in the country.

Carlos Arturo Gallego is an experienced radio man. He has worked with Caracol Radio in Colombia, with Televisa Radio in Mexico and with the Prisa group in Spain, a trajectory that has allowed him to know how radio is made in different parts of the world and to be able to have a broad panorama of how radio can be adapted to the new realities of audience and technology.

The first thing he vehemently pointed out is that radio is not dying, but it must be reimagined. In addition, colombian radio is of good quality, from the technical and content, compared to other radios in Latin American countries.

He stressed that to face the challenges imposed by twenty-first century radio, it must be clear that radio is alive, that new digital media are tools for traditional media and especially for live media. "You don't have to see them as competition, on the contrary you have to understand them, use them and exploit them. Technology became a commodity, it no longer makes a difference, so you have to have the best talent, offer intelligent content and have a lot of production and a lot of promotion."

He also recommended belonging to a multimedia group, through which talent and resources are shared, the vision of the contents is complemented, there is mutual support, cross-promotion and convergence is strengthened.

Disruptive thinking
As a way to face the current challenges of radio, Carlos Arturo Gallego proposes to apply disruptive thinking, which seeks to do things differently from how they are traditionally done, analyzing different points of view, all options before discarding them, encouraging creativity.

"Disruptors are those who, thanks to their flying minds, their rule-breaking ideas and their tenacity, can turn a company into an innovative force. There are several successful and internationally recognized companies that apply this concept, such as the Virgin Group," he added.

To apply this concept, some tips are: keep the simple, do not give up if at first you do not succeed, ask yourself if you are having fun?, be innovative, keep in mind that talent is the best asset, lead by listening, do "refresh" from time to time.

The Blu Radio Experience
Carlos Arturo Gallego was in charge of the start-up of the Blu station, which became operational in September 2012, marking the return to the radio of Caracol Television. Today the station has achieved an important position in Colombia thanks to its FM dial and its extensive virtual presence.

To venture into a highly competitive radio market, as was the case with Blu, they took into account that in the markets there are always empty spaces, so they looked for them, found them and filled them. In addition, they looked for the difference especially in the color of the product and secured the financial budget given that spoken radio is expensive.

"You have to take risks, break schemes, traditions and paradigms, be disruptive as part of the philosophy, forget about the traditional, be willing to raise the competition in three basic scenarios: look for the best talent, produce very good content, have high advertising and promotion capacity. And, above all, you have to bet very digital.

He added some keys to making spoken radio today:
1. Engage with the listener.
2. Speak as if you have only one listener (you listening to me).
3. Know how to listen.
4. The one who "writes well, speaks well".
5. Remember that you are flesh and blood.
6. Take advantage of the "moments of truth" and "know how to get to the bowels".
7. Handle a small dose of "irony," because this is one of the most effective ways to accentuate the story.
8. Surprise your listeners.
9. Prefer eloquent interviewees with a great sense of humor.
10. Be consistent.

Based on these aspects, Blu Radio was implemented. At the age of three, these are some of the reflections on what its managers have learned in this experience:

1. Dare and Take Risks.
2. Hire the best talent, so they know from the beginning that it will be difficult to handle.
3. Focus on the "core business".
4. Maintain distances with peers, bosses and subordinates.
5. If what is perceived, they say in the street, "is a truth of fist".
6. Projects must be given time.
7. Try to listen to all proposals.

What could radio look like in a few years?
Finally, the Vice President of Radio of Caracol Television highlighted some points that in his consideration will mark the agenda of what will be the radio in some years:

No thoughts on “"You have to reimagine the radio"”