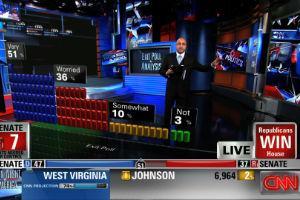 Interactivity with viewers and linking programs with social networks are some of the new options of graphics systems for news, aspects that have gained a lot of strength in Latin American television channels.


During the second quarter of 2012, Colombia's two private television channels, Caracol and RCN, undertook a renewal in their news segments that began with the change of the director of the newscasts and graphically materialized in the middle of the year.

Both networks explained at the time that the idea and motivation to make these changes was the need to project a more modern image, with a greater use of existing technology, allowing viewers to be more friendly and through graphics to better understand what is being presented.

These two channels are just one example of the importance that Latin American channels have been giving to their image. And obviously the technology is available in the region to facilitate these changes in the media that want to continue in force in the coming years.

According to Aldo Campisi, vice president for Latin America at Chyron, "graphics not only help tell a story, more importantly, they are the identity of the programs and the channel. It's the visual brand and in the region this issue is clear."

The latest developments
The novelties in graphics systems are focused on greater interactivity and participation of viewers with the program that is being broadcast, through text messages or from social networks.

Some of the most advanced systems allow you to add complementary comments to the news that is being transmitted, either directly from the newscast or by interaction of the viewers with the program through surveys, they also facilitate communication between viewers at the same time through their tablet or smartphone.

In addition, they have options that allow you to quickly display Twitter and Facebook comments on the air, among other social networks, as well as generate real-time graphics with all this information.

For the generators of graphic information in the news and other programs, there are also novelties. Among them are the generation of information through a touch screen without the need to write programming codes, being able to share from anywhere in the world, 24 hours a day, seven days a week, graphics and the editorial part that comes with them.

Likewise, they have the ability to make maps without the need for software, with the right colors for each television station and integrate the work with other areas, even importing the graphics made with old systems. All these options have a single purpose, that the graphics are both attractive and easy to read or understand.

Well-kept image
When presenting the new graphic design of Noticias Caracol, its director, Luis Carlos Vélez, stressed that this work was carried out by the internal team of the channel and not by external advice, either from the company or the country, as is traditional in this type of interventions.

And it is the creativity of the image designers of the region, according to the director of Chyron, has been setting the tone in the international arena during the last years, to the point that it is now common to find cases like caracol, in which the intervention of foreign personnel in the redesigns is not necessary.


In the design and management of graphics inside a newscast, according to Ángel Ylisastigui, of the Avid company, different departments participate, including producers, editors and graphic designers, so it is important that graphics systems are connected to these areas.

Campisi adds that a very important aspect plays the graphics so that a channel can be consistent with its identity, now that technology has brought the image in high definition, as well as the new ways of accessing television content through computers and mobile devices such as tablets and smartphones.

Varied uses
In a newscast, graphics are commonly used to identify anchors, journalists, interviewees, and different sections of the program. But they also allow to develop the images that accompany the presenter every time he announces a news. All these stripes, curtains, credit bars and entrances, must have a coherence in colors and shapes that allow to create the identity of the medium.

This was indicated by the director of RCN news, Rodrigo Pardo, at the time of presenting his new design. "We want to offer a kinder and easier to interpret image, with which viewers can be constantly informed and that goes beyond the news as such. That is why now you will find a graphic set specially designed to bring you closer to the different news and information aspects, designed by the production and graphing team of the channel".

But these are not the only functions that the graphics fulfill in the informative segments of each channel, since they are a fundamental part of the special transmissions. One of the best known cases is that of transmission on an election day, at which time they require viewers to be able to quickly and clearly access the results and for this manufacturers have several options.

Sports segments are usually constant users of graphics. But not only informative programs use them, now any live program always needs real-time graphics, for example channel branding, sports analysis, augmented reality and commercials.

Ángel Ylisastigui mentions that "in addition to the newscasts, we have observed that the television networks use graphics and images in their sports programming, as well as in variety programs and contests."

With respect to the market for graphics systems in Latin America for the remainder of this and the coming years, manufacturers are with good expectations, taking into account that one of the main users of these systems are sports programs and precisely the two largest sporting events, the World Cup and the Olympic Games, will be held in the region, exactly in Brazil.

Therefore, the companies have prepared for this moment and this year they have reinforced their market strategies in the region, with the opening of direct offices with attention in the native language, as well as new distributors in each country.

**Always look professional
The two experts invited for this article, from the companies Avid and Chyron, pointed out what are the disadvantages that it brings for the informative segment of a television channel not to have a good workflow of graphics:

- Not having a dynamic, modern and professional look.
- Do not work collaboratively with other working groups within the company, such as journalists, editing, website etc.
- Do not take advantage of the tools of a system that worked in real time and therefore always be making render.
- Do not be the first to air with a graphic that explains to the viewer what is happening.

No thoughts on “Graphics: image and interaction ”