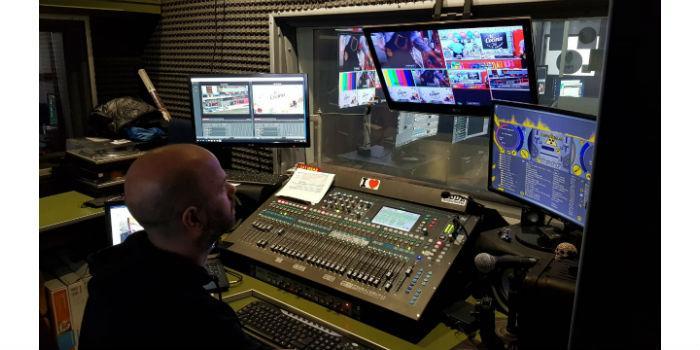 For two years, a project was executed to digitize Channel 11 of the public television of the province of Tierra del Fuego, at the southern tip of Argentina. Staff training was a key part of the project.

Channel 11 is located in the province of Tierra del Fuego, at the southernmost tip of South America, which is known as the end of the world. It is a 50-year-old free-to-air television channel, which provides the service from the city of Ushuaia and now has national coverage, including the Falkland Islands and Argentine Antarctica through satellite.

The current administration of the Canal, which began at the end of 2015 at the head of Carlos Dell Aguila, director of the Fuegian Public Television, had the mission of valuing public media. At that time they found an obsolete channel in technological matters and with human resources very burdened by the lack of investment and training.

"The technology was old, analog, due to the lack of investment for decades. In fact, Channel 11 of Ushuaia in its primary version did not reach more than 500 meters around where the tower with the antenna was located, in the same property where the station works. The transmission equipment was totally expired, all the part of ingestion and emission of contents, of the 16 systems that should be working, only 2 operated, "said the director of the Channel.

He added that the broadcast depended exclusively on a single server, that if it was cut, the Channel came out of the air and the switcher of the studio had 30 years of use. Due to the conditions of the area where the Canal is located, with a lot of snow and a lot of cold, in addition to being 3 thousand kilometers from Buenos Aires, the preventive maintenance of the equipment is very necessary.

Update
Recently arrived, the administration of the Canal presented to the governor of the province an update project that had the support of the Argentine Television Union, which included a new technological infrastructure for the Canal in high definition and training for all the professionals who work there, taking advantage of the experience in the digitization of another regional channel between 2012 and 2015.

In total, a budget of 5 million dollars was allocated in 2016 for the digitalization of the production and broadcast of the Channel. The project included systems for ingesting and reproducing fully digitized content, high-definition cameras for Open Digital Television, being the first channel of public television in Argentina that transmitted in this standard.

"Modernizing Channel 11 meant better working conditions for all professionals in the industry, because if there is no investment or infrastructure, the dignity of work is lost by not having the necessary tools to carry it out. That is why they had the support of the Argentine Television Union," he said.

Carlos Dell Águila assured that there were no difficulties during the process because the governor of the province made the decision and had the necessary resources to advance this transformation process, with which it quickly went from the political decision to the execution, managing to be the first 100% digitized public channel and have a signal on the satellite with national coverage. The only drawbacks were in the import of some equipment.

An important part of this project was the recovery of the capacities of human resources, through a training plan in all the areas that make up the production of content and the transmission of the signal, which also had the support of the Argentine Television Union.

"Public services must be provided efficiently and with quality. With quality through the infrastructure that is installed and be up to date with technology. And with efficiency from the training of the staff, who are the ones who in the end day by day make the Canal visible. That is why the training of the staff, about 110 people, was included in the purchase of the equipment. Each manufacturer guaranteed the training and the staff did their part to achieve a good job, each area gave its suggestions and even participated in the design, "said Carlos Dell Aguila.

Technology
After the process, today the channel is 95% digitized, only 5% is pending in specific issues and the analog signal is still on the air until the blackout occurs in Argentina, which is scheduled for September 2019.

"The cameras are Sony, both studio and outdoor, including an FS7 4K for outdoor production. We acquired a 16-channel ForA production switcher. The central control has Sony technology, in sound we have an Allen & Heath console, all the microphones are sennheiser wireless, ingest and emission systems, LED lighting in the two studios, a Tricaster 460 and we optimized the spaces to include 30 islands of state-of-the-art edition, "said the Director of the Channel.

The technological update also allowed innovation in terms of content, being the great challenge for 2019. Producers are being formed to sustain 80% of total own production content per day and live, shared with channel 13 of Ríogrande, which are linked by a fiber optic link.

In the city of Ushuaia there are more than 90 thousand inhabitants with a fairly complex topographic system, with mountains, hills, hindering the propagation of the television wave. 90% of the city's territory is covered by TDA and 10% by satellite.

New platforms
Today the channel's content production is mainly focused on transmedia. They have a streaming channel on their website and upload all the programming. During the first year they had a million visits, so they are adapting to new platforms and consumption habits, being able to reach a much wider audience, always within the framework of providing a service.

Finally, the Director of Fueguina Public Television said that "the target audience of the Channel is very wide and varied. The program reflects the culture of Tierra del Fuego and now with a national projection. Canal 11 is part of the Patagonian network of public television stations, a set of seven channels from all the Patagonian provinces, through which we exchange content, summarize weekly regional news and have co-productions with Televisión Pública Argentina, the national public channel. "

No thoughts on “Digitizing doomsday TV”