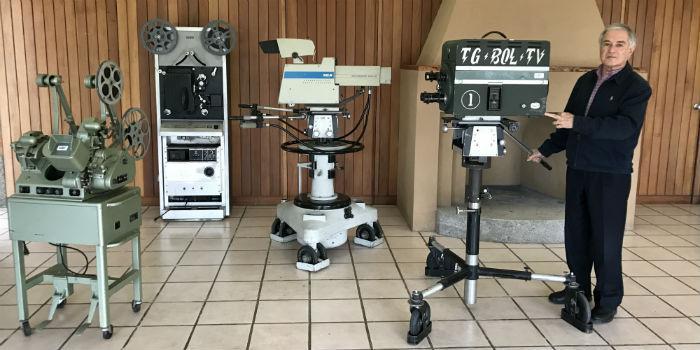 After five decades dedicated to the development of the television and radio industry in Central America, Edgar Sandoval Aquino has decided to retire to enjoy his family, music and painting.

As a culmination of the studies in the Vocational Technical Institute, a period of supervised practice was required in a company related to the area of studies. Edgar Sandoval Aquino was assigned the company Radio Televisión Guatemala, concessionaire of Channel 3 television, the most important and oldest in the country (1956) and immediately it was also his first job and his entry into the industry.

He recalled that "Mr. Federico Licht, a legend in broadcasting engineering, was the one who opened the doors for me. Thus was born my life in television and the profession that would accompany me throughout my life because I simultaneously began my studies of electronics in the engineering faculty of the state university. "

From that time he highlighted important achievements: in 1968 they broadcast live and in color the Olympics in Mexico, in 1969 the arrival of man on the moon and in 1970 the World Cup in Mexico. He even told an anecdote from that time. In 1968, except for a WFM, they had not yet received a single color monitor or television, they knew they transmitted in color but could not appreciate it.

These achievements were possible thanks to a microwave network that they installed themselves linking both countries, there was still no satellite TV transmission. He stressed that the effort was great and worthwhile, since they were pioneers in Latin America transmitting in color.

"During the 80s some friends invited me to participate in the creation of the first school of communication sciences in a private university. The idea excited me not only for collaborating in the very elaboration of the pensum but also for the development of radio and television laboratories. I never thought of myself as a university professor and yet I stayed ten years enjoying how rewarding it was to contribute to the professional training of young people," he said.

A regional work
The history of Edgar Sandoval Aquino in the broadcast industry does not remain only in his country, Guatemala, since he has had the opportunity to participate in projects in other countries in the region. One of them is Panama. In 1985, when he was already in charge of the Technical Directorate, he had to direct the project of Channel 5 TV in Panama, at that time Panavisión del Istmo. Almost a feat, because it was put on the air in just 3 months. From that time he has fond memories of his work with Rolando Guerra and Tony Black.

In the 90s, the Albavisión group (radio and television) was integrated, which would cover several countries in North, Central and South America. Its field of action grew, as did its obligations and the range of activities was expanded according to the emergence of new technologies.

"I had the privilege of working with professionals such as Alfredo Flores (Mexico), Álex Sánchez and Luis Abarca (Costa Rica), Alejandro Aguilar (Ecuador), Luis Bordo and Marcel Herrera (Peru), Andrés Riveros (Paraguay), Marcelo Pandolfo and Raúl Peña (Chile) and Ricardo Gálvez and Antonio Rivera (Guatemala). By attending congresses, seminars, research and equipment study, I made trips to factories and attended fairs in different places, which led me to know more than 30 countries, "he added.

In the 90s there is also another anecdote that marked him. Due to the internal conflagration in Guatemala, even the media was not safe. A powerful explosive seriously damaged the transmission plant. The reconstruction, not replacement, of transmitters and towers became several laborious weeks. And in the end the tenacity and ingenuity of the Latin American could more than the frustrating panorama and they went on the air with equipment that although they looked like products of Frankenstein's laboratory, worked.

Adoption of new technologies
As everywhere, in Guatemala the constant technological development meant having to face many challenges. In some areas more than in others, but in the end from time to time the radio and television stations had to be renewed, but not only in their equipment, but also in the strategies to maintain and improve the audience, either through new services or by expansion and modernization of existing ones.

Our Professional of the Month for this edition, stressed that "perhaps the area of most innovations was always the press on television. From capture devices: film, videotapes, optical discs, memories, etc., through editing, automation and broadcast formats, to integration with 3G, 4G technologies and incoming and outgoing social networks that today give a level of operational complexity unthinkable only ten years ago. " Guatemala's Channel 3 today is about to inaugurate a press room, including new automation and news systems.

On the technological update in the industry, he commented that the production area faces new challenges in terms of the use of IP, HDR, 4K PTP and forces a constant renewal rate that barely gives time to think and make decisions correctly, sometimes venturing with devices and equipment without enough field test to consider them completely reliable.

"In addition, behind one comes another development in a career that almost does not give time to breathe. This is this industry in which we operate. It's like swimming against the current: if you stop for a moment you don't even stay, you go backwards."

Your vision of the future
For Edgar Sandoval Aquino, at this point free-to-air television is no longer seen as an isolated business. It is rather the convergence of platforms of various technologies that focus on a common goal: to reach different population niches impossible to reach from a single medium.

"That said, it seems simple, but at the same time there is the need for specialized people to handle them. Therefore, during the last decade we put effort in a group within the technical area, not only for the issue of IT but also for other inescapable related. We named it as the Digital Applications group and its range of action covers activities as diverse as network design, news system management and marketing to DTT transmitter exciter programming."

He also reflected on a recurring question in the industry, how far will television as we know it go? Since he started in this medium he has never seen it stop or get anywhere. He assured that it is an endless process, in which he only had to live a section, very important that yes because he knew the television in black and white, then in color, stereo, satellite, digital and 3D, but it is a stretch after all that now is only part of a larger world in which they converge, they contrast or complement so many technologies that make the profession increasingly interesting.

Ad portas of your retirement
Although he had a quiet childhood next to his parents and two sisters, his passage from adolescence to maturity, he did have real emotions due to the world events of the 60s, such as the Beatles, the man on the moon, the Vietnam War, the hippies and, unfortunately, social outbursts everywhere.

In his country an internal armed conflict began that would bleed him for more than 34 years, they were difficult times. It coincided with his beginning in the world of electronics, studies at the Vocational Technical Institute and also his main hobbies: music and drawing.

"As half the world should have done it, three friends and I formed a rock band, with the special circumstance that, due to lack of economic resources, we also had to be the manufacturers of the instruments, so, guitars and amplifiers came out of the workshops of the institute, product more of our enthusiasm than of our ability," he recalled.

Today, after five decades, it is in its stage of retirement from the industry, which has dedicated the last years exclusively to activities in Guatemala: 8 matrix TV channels and their 70 repeaters, 11 FM matrix radios and their 30 repeaters, several production studios, three newscasts and a 24-hour news channel with its digital and satellite mobile microwave units, plus its integration and interaction with other digital media.

"I have a great family, not in number but in the enormous strength we give ourselves. My wife gave me two children, also immersed in technology, and these gave me two grandchildren and two granddaughters. Music and painting haunt the atmosphere, as well as the willingness to technology. There is no doubt that life rewards us in the best way. It is truly beautiful to see the transcendence of our biological and cultural legacies," he concluded.

No thoughts on “TV, an endless process”