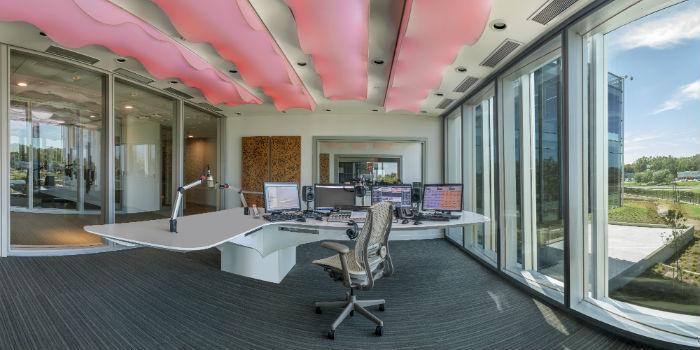 The projection room is one of the outstanding spaces of this new headquarters, because, as it was not symmetrical, there was no recommendation for any ceiling height, and large inverted rays obstructed the view.

At the end of 2017, the construction and installation of Disney Latin America was completed in Argentina, a building that included, of the 258,333 square feet, 19,375 for video post-production divided into 44 spaces. This headquarters is located in the city of Pilar, 29.2 miles from Buenos Aires.

Giner, an audio and acoustics company from Sao Paulo - Brazil, was the integrator in charge of audio and video solutions. He was hired to execute the project after work done for Disney's radio station at the World Trade Center, which José Carlos' team had executed in 2009. The project for Disney, the new Latin America headquarters included a usable area of 258,333 square feet with 950 employees. Of this total, Giner has 19,375 square feet divided into 44 spaces for the execution of the project.

In addition to acoustics, Giner was responsible for the management and work of all technical areas, including air conditioning, electrical installations, architectural design and interiors. The project included 23 video editing workstations, ten Pro Tools dubbing and voice studios, a radio equipped with two studios, nine technical rooms and a movie theater, providing sound insulation for management and for the president and vice president rooms.

"The customer needed a screening room with innovative concepts to introduce the new features of the films to specialized media and business partners, making use of the new Dolby Atmos projection technology, which is the heart of the company," said Giner.

He added that "Despite having acted in the market for 35 years in this field, we feel the need to investigate the latest generation electroacoustic and audio resources to introduce them into our projects," the engineer said. Giner visited the audio and video technology fairs for two years, highlighting the ISE 2015/2016 in Amsterdan, as well as others in America and Germany.

The architecture was entrusted to the office of Alexandre Wissenbach who worked in a consortium with the local workshop, an essential condition for translating and adapting the project to Argentine rules and regulations. According to Giner, the choice of the location of Disney's headquarters in Latin America benefited from the favorable economic situation derived from the first months of Mauricio Macri's government. "Currency exchange rates helped, I had no way to import equipment in the previous government of Cristina Kirchner," Giner recalled.

From the façade of the glazed building you can see the path and the panoramic openings between the studios have been preserved.

"As the large structure was ready, we had to close openings here and there to contain leaks and maintain acoustic comfort," Giner said. The company opted for some elements manufactured in Belgium that allowed structural decoupling. Walls, cladding and floors were decoupled from the large structure, which helped maintain the degree of structural insulation at sound reduction ratios greater than 55 dB within the halls and 60 dB inside the cinema hall. An initial white paper showed the results of isolation simulations carried out in programs such as SONARCHitect ISO, Insul, WinFlag and CDM Solids.

The movie theater received special attention, as requested by senior management. For her, innovative design features were presented, never before used in other rooms, as well as new concepts. The main idea behind this was to design a fuzzy room rather than an absorbent one and the various speakers used with Dolby Atmos technology were requested to remain invisible to movie viewers.

To meet these demands, new acoustic devices were designed in England and the United States. "We asked the designers to help us create something unprecedented to control the sound fields, while remaining exclusive at the same time," Giner said.

For the FM radio project, these same elements provided a characteristic sonic personality to the rooms. "Very welcome by listeners who felt the changes introduced in the sound of the radio according to surveys conducted by the station."

Disney FM Radio
After several years operating from an old building located in downtown Buenos Aires, Argentina, Radio Disney needed to move to a new custom facility on the outskirts of the city, which meant an excellent opportunity for technical remodeling using the latest technological advances.

Giner, technical manager of the entire project, requested the creation of a new project from scratch, having had to use only the latest technologies available for his partner Ciro Riskallah, owner and chief engineer of ABC Telecom Brasil, a company with more than 30 years of experience in the transmission industry.

But the reality wasn't that simple: Disney Radio requested 2 studios with all sorts of facilities, including the ability to run the radio from any studio at any time. On top of that, there were the requirements of the Argentine transmission employee union that complicated things.

Ciro and his associates Silvano Purin and Marcelo Cacheiro, both engineers with more than 30 years of combined experience in the streaming market, began evaluating the proposed scenario and concluded that the topology should be a centralized TOC that would house all servers, audio processing and distribution equipment, STLs and telephone systems.

The project was built around GatesAir's Vistamax audio management system, which turned out to be the most suitable for this application. The core of the system is a VMConnected Network Envoy framework loaded with spare power supplies and controller cards, two digital I/O cards, an analog I/O card, two hub cards, and a logical I/O card.

Each studio is equipped with a GatesAir NetWave networked digital console, which features a PRE99-1424 dual router kit that provides source selection for two attenuators. This feature allows the operator to select virtually any of the source signals connected to any of the consoles or sources connected to the Envoy frame.

In addition, a PRE99-1372 single-source selector was installed in each study to select which of the studies would currently be used for airborne applications. The connections between the 6 studios and the TOC are made through cat6e cabling. VistaVue software graphically manages all workflows and brings even more flexibility to the entire system. Emergency provisions were also deployed.

Although highly unlikely, the catastrophic failures affecting the Envoy system cannot be overlooked. There are both analog and digital audio cables from each studio to the TOC for use in such situations. To simplify the use and get good results from Neumann microphones (another customer requirement), Symetrix Voice Processor 2x was chosen as the MIC processor.

A spare GatesAir IP-Link 100 receives the program from an Orban 8600 FM processor and sends it to the transmitter plant via two distinct routes in a main/alternative configuration. For remote transmission, the Comrex ACCESS 2USB turned out to be the best choice due to its ease of operation and versatility.

Jose Carlos Giner highlighted that it was a Brazilian company that designed and developed a cutting-edge project in Argentina in a very difficult scenario for civil construction and integration industries under governmental changes.

"This project generated many opportunities and jobs in two years. By providing work to more than 250 professionals, the work was developed with engineers, architects, technicians and assemblers from Brazil and Argentina and constituted a unique opportunity to work on one of the most important and innovative Latin American projects in the years 2016 and 2017, He concluded.

No thoughts on “Disney opened headquarters in Argentina”