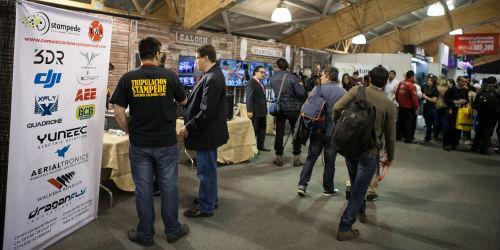 Colombia. "With an attendance of more than 5,000 visitors and a participation of important manufacturers and distributors as exhibitors, the TecnoTelevisión&Radio fair was closed, a figure that managed to fulfill one of the purposes of the event: to increase its number of visitors by more than 15% compared to the previous year," said Max Jaramillo, President of LatinPress, publisher of the magazine TVyVideo+Radio and organizer of the event.

In the specialized academic day, topics such as the application of 4K, 8K and HDR technologies in the television workflow, the future of IP television, DTT in favor of education and streaming radio, among others, were presented.

Given the technological boom presented at the fair through its exhibitors, LatinPress Inc., publisher of specialized media and organizer of the meeting, highlights some of the most outstanding and avant-garde products, among all the novelties presented at TecnoTelevisión&Radio:

Enco Systems presented a sample of closed caption system, a product aimed at the benefit of people with limited hearing; works as an audio-to-text converter through an automated speech recognition system.

Meanwhile, StudioCast exposed a product aimed at radio stations for video capture and immediate delivery via streaming to any broadcast channel, thus reducing not only the time and efficiency of transmission, but also the participation of operators in radio booths.

Finally, the Carrillo Corporate Group, distributors of Blackmagic, manufacturers for the production and post-production industry of film and television, made a sample of equipment, among which the Davinci Resolve stands out, for editing and coloring films. The DaVinci Resolve 12.5 offers more than 250 new features and endless improvements, such as controls for the use of keyframes, on-screen text editing and much more.

Finally, from the TecnoTelevisión&Radio fair, the social contribution to the industry in Colombian academic environments was fulfilled, within the framework of the TecnoTelevisión 2016 University Contest with the award of the best work that held, with more than 15 thousand votes, the audiovisual piece entitled M.47, developed by a group of students from the University of Manizales.

In 2017 TecnoTelevisión&Radio will be held between November 14 and 16 at the Corferias Convention Center in Bogotá, Colombia.

No thoughts on “In Colombia, the latest trends in TV and radio were presented”