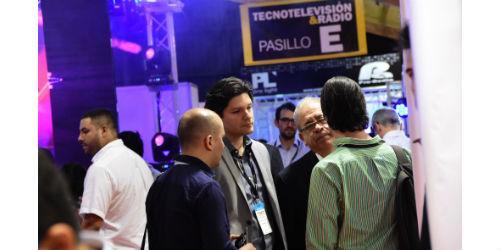 Colombia. With 70 confirmed exhibitors, Bogotá will be for the ninth consecutive year  the scene of the Tecnotelevisión&Radio fair, which arrives at Hall 6 of Corferias  from October 11 to 13, with a busy exhibition of the most avant-garde technology in the  industry for broadcasting, and which will additionally have a specialized academic day  (on October 10 and 11) which last year was rated as  highly qualified recommended by 100% of its attendees.

The main manufacturers and distributors for the television  industry will be present at this trade fair that brings together engineers, technicians, directors and owners of television channels, producers and post producers of film, television and audio, networks and cable TV stations, radio stations and producers  , digital film studios, recording studios, universities and audiovisual arts teaching institutions.

There are more than 3,000 square meters dedicated to this commercial space, which will be complemented by an academic program that this year will bring together 22 speakers from 10 countries with 20 keynote talks and two workshops on the latest trends in technology.

The program of conferences on television production and post-production will address cutting-edge topics such as the application of 4K, 8K and HDR technologies  throughout the television workflow, the future of IP television, the advances of multi-screen services and DTT in favor of education.

In addition, the congress will have a special session, as a success story, on the audio for the transmission of the last Olympic Games, by Dennis Baxter, who is an audio consultant and sound designer for major international sporting events. He has just finished the preparation of the Summer Olympic Games in Rio 2016, his experience in both creative and technical audio production extends over nine Olympic Games and 30 years of experience, he has won five Emmy Awards and the most recent international award has been the New York Film Festival for the Sound of the BBC production "The Sound of Sport".

On this occasion, and for the third consecutive year, the congress will have a room dedicated to radio; in this, cutting-edge topics such as visual radio and its future in Colombia, content automation and new technologies to achieve it effectively will be exposed.

As a novelty for this year, there will be two workshops, one focused on interactive content and another technical in which the problems that technicians must solve in the day-to-day operation of the stations will be addressed.

TecnoTelevisión University Competition
On the other hand, and with the purpose of making a social contribution to the industry from the Colombian academic environments, which at this moment form the future technical and managerial human talent of the country, the best university video works will be awarded, within the framework of the TecnoTelevisión 2016 University Contest.

The creators of the winning audiovisual piece will receive:TecnoTelevisión University Contest
1. Recognition plate.
2. Article in the magazine TVyVideo+Radio highlighting the profile of the winner(s) and the work.
3. A recording kit that includes:

For more information about the fair visit www.tecnotelevision.com