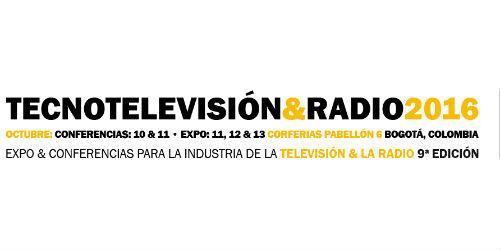 Colombia. With speakers from 10 countries, 20 keynote talks and two workshops, the academic program of TecnoTelevisión&Radio will be developed in 2016, a congress and commercial exhibition that will be held between October 10 and 13 in Bogotá, Colombia.

In two conference rooms, one dedicated to radio and the other to the production and post-production of television, the congress will provide industry professionals with the latest trends in technology that will allow them to face the challenges in the near future.

For the third consecutive year, the congress will have a room dedicated to radio. For 2016, it has been divided into two days: October 10 will be focused on how to achieve better content to win and sustain a captive audience.

On October 11, it will address technical issues, among which a workshop stands out which will provide tools to solve the issues that arise in the day-to-day operation of radio stations. To learn about the academic program for the radio show, click here.

For its part, the program of conferences on television production and post-production will have current technical topics such as IP, HDR, 4K, 8K, color correction, H265, lighting, automation for workflows, update of the ANTV plans for the sector and a special session as a success story on audio for the transmission of the Olympic Games.

To learn about the television production and post-production show's conference program, click here.

The academic program of TecnoTelevisión&Radio will be held on October 10 and 11 at the Wyndham hotel in Bogotá.

No thoughts on “TecnoTelevisión&Radio presents its academic program”