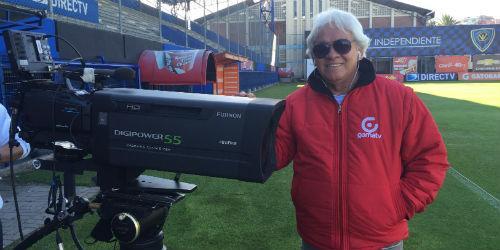 The Professional of the Month for this edition pointed out the slowness with which some renewal processes are carried out in the broadcast industry in his country, including the transition to digital.

For more than 30 years, Rafael Salas has been dedicated to the Ecuadorian television industry, behind the cameras, in charge of the technical part. His extensive experience has been acquired in channels such as Ecuavisa, Telecentro, Teleamazonas and during the last 13 years in GamaTV, where today he serves as technical and operations director.

Rafael Salas told TVyVideo+Radio about his professional life, which was guided by his father, who he remembers telling him "you're going to be an electronic engineer and I don't see you fix a radio". For this reason he studied by correspondence repair of radio and television.

And following the words of his father, he graduated from the University Escuela Superor Politecnica del Litoral, ESPOL, as an Electronic Engineer. His academic training has been complemented by several courses such as Business Administration and Quality Control at the same university.

The Professional of the month invited for this edition of TVyVideo+Radio, is originally from Babahoyo, province of Los Rios, Ecuador, but from the age of three he moved with his family to Guayaquil, a city that he does not abandon despite his work commitments. Half of the week is spent in Quito and on weekends he returns to be with his four children, to whom he dedicates his free time to walk, being one of his favorite hobbies. In addition, he is aware of his football team, Barcelona de Guayaquil, which he says "is the best team in the country".

Always technical
In 1984 he began Rafael Salas' professional career in the television industry. He recalled that "my beginnings in television were a coincidence. I was in college in the early years and a family friend told me 'hey brother, they're taking staff at Ecuavisa'. I went to the place, they interviewed me and told me to come the next day and from that moment I entered the TV."

He said his workdays don't have a defined schedule. They start at eight in the morning, although the entrance is at 9 in the morning and "as we say on television, you know at the time you enter but you do not know at the time you leave. Within our organization I am in charge at the national level of the GamaTV channel. I have heads of the operations area and in the technical part both in Quito and Guayaquil".

Their day is divided into coordination tasks that are continuous and other activities, in addition to attending, as in any channel, the improvisations that always exist. It is also aware of its main challenge, to make the transition from the analog to the digital (HD) television system, so the preparation for both the technical and operational part is continuous.

In that day to day he has been able to participate in the technological changes that television has experienced. He commented that "in the region the development of content is growing, but in terms of the deployment of networks, they are limited to granting licenses for the transition to Digital TV, which in many countries are delayed. In the case of Ecuador, the auctions of the new frequency concessions for digital signal will soon be held."

He also pointed out some points that demonstrate the state of the industry in his country, Ecuador:

Technological renewal in GamaTV
Rafael Salas concentrates his days mainly on one objective: the renovation of studio equipment towards HD and 4K, with due planning and establishing adequate and real budgets according to the economic reality of the country and the industry.

To achieve this, he stressed, permanent communication with the Administrative Management and shareholders is important to be able to establish plans and goals in accordance with the strategic objectives of the company. "Employees require continuous technical training of new technologies, as well as creative and operational to make greater coverage with the proper management of budgets."

No thoughts on “On TV by chance”