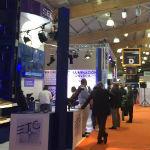 Colombia. On November 10, 11 and 12, the Expo Tecnotelevisión and Radio Colombia 2015 fairs were held in Corferias, Bogotá. The trade fair that took  place in Hall 3 of Corferias registered the visit of 4,274 visitors. There were a total of 3 days of exhibition that brought together owners, managers and technical staff of the production houses, public and private television and radio networks, not only from Colombia but from the Andean Region and Central America.

The fair has become the main showcase for companies in the sector to exhibit the latest technology and services for the industry." In 2015 TecnoTelevisión y Radio was consolidated as the most important training and updating event for radio and television professionals in Colombia and neighboring countries. The participation of professionals from different regions and media, as well as the presence of speakers from eight countries, confirms this. From now on we will start working towards making the 2016 version much better," said Richard Santa, editor of TVyVideo+Radio magazine and academic coordinator of the event.

It is the edition that has registered more visitors so far in this new stage under the realization of Latin Press Inc. The organizers expressed their satisfaction with the influx of public, as well as the exhibitors who met new business prospects on each day of the trade fair. "The growth  registered in visitors to the trade fair, of around 12%, is a great indicator that the event has positioned itself with each edition and industry professionals are visiting us," said Albeiro Cortés, Commercial Coordinator of the Academic Program."

"Having the participation and support of associations that lead the updating and certifications in the industry, puts us in a privileged place," said Max Jaramillo, President of Latin Press Inc, organizing company of TecnoTelevisión &Radio.

The academic congress was held on November 9 and 10 at the Wyndham Hotel in Bogotá and was attended by 17 speakers from eight countries.

Within the framework of the first day of Expo TecnoTelevisión y Radio 2015, the winner of the TecnoTelevisión 2015 University Contest was announced. The work Asomucav (Ecological Control of the Broca), was the one that had the highest number of virtual votes during the 15 days that voting was open.

The work was carried out by Jesús Alberto Arenales Carreño, Carlos Andrés Ramírez Becerra and Andrés Cáceres Durán, students of the Seine Agrotourism Center of San Gil, Santander. Its synopsis describes it as:

"Innovative process on the control of the drill bit that implements new environmentally friendly techniques carried out by an association of women entrepreneurs from the San José Valley, generating interest within the coffee community in the use of this new technique and reducing costs in the production of coffee, as well as offering a final product of good quality."

At the award ceremony, Carlos Becerra, from Panasonic Colombia, the company in charge of sponsoring the TecnoTelevisión 2015 University Contest, presented the winning group with the AG-GH4 reference 4K camera.